Forum List What's new Dark Style Change width
Log in Register
What's new Search
Menu
Log in
Register
Navigation
Install the app
More options
Dark Style
Close Menu
Posted on February 7, 2016 by Matt Hough
You are using an out of date browser. It may not display this or other websites correctly.
You should upgrade or use an alternative browser.
A flawed epic 3.5 Stars

James A. Michener’s expansive novel Hawaii contained enough plots and characters for about five films, so George Roy Hill’s 1966 film Hawaii plucks only a small portion of the novel to suit its purposes.

James A. Michener’s expansive novel Hawaii contained enough plots and characters for about five films, so George Roy Hill’s 1966 film Hawaii plucks only a small portion of the novel to suit its purposes. With a tiresome, irksome focal character, however, the film’s lengthy running time (originally three hours in its initial roadshow engagements with the subsequent theatrical cut running a bit over two-and-a-half) tends to often seem longer than it is, and with headliner Julie Andrews, the glories of the Hawaiian locations, and some colorful supporting characters offering only partial redemption from the movie’s central story, Hawaii ends up offering a rather mixed bag of entertainment.

Driven by the pleas of Hawaiian prince Keoki (Manu Tupou) to send missionaries to the islands to lead the people to Christian salvation, Yale graduate missionary Reverend Abner Hale (Max von Sydow) is informed he must marry before he’ll be permitted to journey to the islands. Being strict and straight-laced with total devotion to God, there are no women in his life, but the Reverend Dr. Thorn (Torin Thatcher) introduces him to Jerusha Bromley (Julie Andrews) who’s been pining for two years after seemingly being forsaken by her lover Captain Rafer Hoxworth (Richard Harris). They marry in 1820 and travel to Hawaii where Abner immediately runs into problems with the natives expecting them to give up their traditions to suit his rigid and inflexible interpretation of the scriptures. The Ali’i Nui of the islands Malama Kanakoa (Jocelyne LaGarde) takes an instant liking to Jerusha’s gentility and kindness and over time gradually allows Abner’s conditions for Christian redemption to convince her to change some island laws, but the white man’s incursion onto the islands has consequences on the natives including infectious diseases and drunkenness, and Jerusha over time despite giving birth to three children tires of Abner’s cold, implacable heart and finds it hard to resist the sexual allure of Rafer who lands on Hawaii and is devastated to learn Jerusha has wed despite his having written many letters over time that got delayed by slow passage and then pocketed by Dr. Thorn who didn’t want Jerusha tied up with a sea captain.

The script is credited to both Dalton Trumbo and Daniel Taradash, and it’s clear that in their selecting the basically two decades from Michener’s book from 1820-1841 that included white settlers bringing both good and ill to the Hawaiian islands, the themes of paradise lost and the clashing contrast of two incompatible cultures were foremost in their minds. The deck is stacked, of course, by having the consistently irritating Abner Hale as the central figure of the drama, a character so intransigent and unwilling to compromise or see anyone’s side other than his own that the film offers a crash course in frustration for the audience (when the Ali’i Nui knocks him for a loop for defying her commands, we want to give a rousing cheer). Even when shown by his gentle wife that kindness and understanding go a lot farther than hellfire and damnation pronouncements with a people resistant to strangers’ customs, Hale stubbornly refuses to bend, and we wait practically the entire film for him to finally have his eyes opened. Along the way, we’re treated to a nail-biting maelstrom at sea, the luxurious expansiveness of the islands in all their tropical magnificence, an excruciatingly real childbirth sequence, and lots of local color (funerals, weddings, fiery sabotage, an eerie windstorm), all under the expert guiding hand of George Roy Hill.

Though top-billed, Julie Andrews spends much of the movie being quietly submissive to her husband. Apart from that astounding childbirth scene and a climactic moment when she finally reveals her years of frustration and disavowal of her husband’s prejudices masked in religious fundamentalism, she gets only a few dramatic spotlight moments, and the subplot with Richard Harris’ alluring sea captain offering tantalizing temptation for the emotionally malnourished preacher’s wife seems woefully incomplete. She also sings snatches of a lovely song “My Wishing Doll” in the early going that makes it all the more exasperating that we don’t hear the entire song sung in those crystal clear tones that were uniquely hers. Max von Sydow gives an expert performance of the character from the script: an obstinate man so full of his own brand of toxic faith that he doesn’t have room in his heart to welcome anyone else without their measuring up to his exacting standards. Jocelyne LaGarde earned a well-deserved Oscar nomination and a Golden Globe Award for her performance as the island’s ruling princess who makes up her own mind about the customs of her people she finds right or wrong. Manu Tupou offers a dignified and appealing portrait of an island prince devoted to his people but wishing also to earn salvation. Gene Hackman and Lou Antonio also shine in brief roles as missionaries who eventually rebel at the restrictive dictates of the church and go in their own directions to help the Hawaiian people they’ve grown to love. George Rose, Carroll O’Connor, and John Cullum likewise make striking impressions in small but choice performances.

The film’s Panavision 2.35:1 theatrical aspect ratio is faithfully presented in this 1080p transfer using the AVC codec. Sharpness is excellent throughout, and while color is generally strong and solid, it seems to be truer and more consistent in the second half of the movie rather than in the earlier parts of the film where skin tones seem a little too brownish for comfort. Black levels are quite good, and contrast has been consistently applied for a striking picture. There are occasional age-related dust specks, but generally speaking, the general theatrical release cut is clear and clean. The movie has been divided into 24 chapters.

The DTS-HD Master Audio 1.0 sound mix presents a rather thin-sounding mono track that seems ill-suited to the spectacular images and big-screen nature of the entire enterprise. There aren’t any age-related problems with hiss or crackle, and dialogue comes through loud and clear, but this is the kind of big screen epic that cries out for a wide sound presentation that just isn’t offered. Elmer Bernstein’s beautiful background score never clashes with the dialogue or sound effects, but the mono mix doesn’t allow it to sweep us into the vivid emotions and exotic locales of the story as it should.

Isolated Score Tracks: both the theatrical cut and the roadshow edition offer isolated scores presented in DTS-HD Master Audio 2.0 stereo. While the stereo for the roadshow may by electronically enhanced mono, the mix for the theatrical cut sounded like stereo to my ears despite others’ insistence that it’s merely the mono track piped into all of the front channels.

Original Roadshow Version (3:08:56, SD) the windowboxed roadshow edition of the film does zoom nicely without cutting off the sides, and while speckled with dust and dirt, does enable those of us with the letterboxed laserdisc a chance to see this cut more conveniently.

Six-Page Booklet: contains a fine selection of black and white and color stills from the movie, original poster art on the back cover, and film historian Julie Kirgo’s valid assessment of the movie.

Nominated for seven Academy Awards, Hawaii is a flawed epic with many good elements. The Twilight Time disc certainly offers the theatrical cut in its best-ever rendition and as a bonus gives us the complete roadshow cut in standard definition as a bonus. There are only 3,000 copies of this Blu-ray available. Those interested in purchasing it should go to either www.twilighttimemovies.com or www.screenarchives.com to see if product is still in stock. Information about the movie can also be found via Facebook at www.facebook.com/twilighttimemovies.

I enjoyed this to some extent, but I agree the lead character was getting on my nerves. I think the movie focused too heavily on him, but having done that, at least they should have given him some more compassionate scenes so one could feel some more sympathy toward him. But as it is, it was like watching a one-note bad guy dominate nearly every single scene and it was frustrating that his character didn't really evolve at all once he set foot on the island.
Last edited: Feb 7, 2016

Which is why the roadshow version is the only way to go. Julie has more moments to shine. Almost every shot cut is of her.

I have a Sony STRDN1080 7.2 Channel Dolby Atmos Home Theater AV Receiver
and I can't figure out how to zoom it to enlarge the roadshow version. Can anyone help?

I may have answered my own question. The only way I can figure it out is to use the Samsung television remote and use the "P. Size" button and select "Wide Fit".

Is there a better way? Thank you. 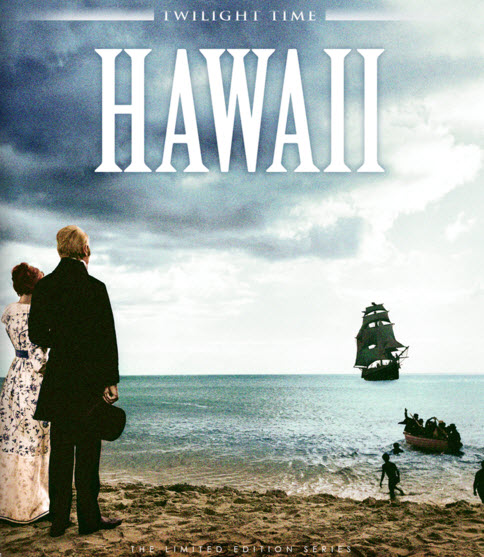