Warner has gone back and released the first four Harry Potter films in 4K UHD Blu-ray, and, unfortunately, Harry Potter and the Sorcerer’s Stone is not up to par in the video department as the other seven films.

When it was announced that JK Rowling’s popular novel, Harry Potter and the Sorcerer’s Stone, would be made into a movie, the filmmakers were challenged to remain faithful to the book as to not alienate it’s very young fanbase.  This meant trying to cram as many small moments from the very long novel into an acceptable running time for a family film. In many ways, that ultimately worked against them as critics complained that the movie was overly-long, running two and a half hours. I tend to agree with them on that point, especially as this is the lightest and possibly weakest of the Harry Potter novels. It is also the sweetest, with the three leads at their most innocent.

If you are not familiar with the story, you likely have been living under a rock for the last 20 years. Some of the film’s strengths come in its casting (nearly every character has been perfectly cast), the gorgeous production design, and, of course, John Williams’ memorable score. The movie may not have been a home run with critics and those who had not read the books, it did set up the franchise that would improve with each additional film.

Harry Potter and the Sorcerer’s Stone was shot on 35mm film stock with digital effects created at 2K resolution, eventually outputted as a 35mm interpositive. It is assumed that Warner Bros scanned that interpositive of the original theatrical cut at 4K resolution to create this 2160p transfer enhanced with HDR10 high dynamic range. While a definite improvement over the now-dated VC-1 encoded 1080p transfer created for the Blu-ray that was first released way back in 2007, this film has always had a problematic transfer, which is a bit more confounded when it comes to the application of HDR. Details are improved, particularly in textures of the intricate stone walls of the sets and fabrics used in the costumes. The overall color tone is much warmer than before, with deeper yellows and oranges, while metallic and crystal-like items have a more defined shine and translucency. Where the transfer (and HDR) falters is in contrast, with blacks often appearing grey with some loss of shadow detail and whites sometimes appearing washed out along with flesh tones. As I said, it is an improvement over the 1080p Blu-ray, but someone really overdid the HDR processing on this release.

Harry Potter and the Sorcerer’s Stone gets an upgraded DTS-X soundtrack, providing more depth to the overall sound design with more precise placement of sound cues and added height channels, providing more natural panning of effects from one end of the listening area to another. LFE presence is a bit stronger, while dialogue is clear and understandable throughout without getting drowned out by music and effects.

As usual with most Warner 4K UHD releases, there are no special features on the UHD disc. Warner has included the 2-disc Special Edition Blu-ray release from 2016.

Blu-ray Disc One (The Movie):
Theatrical and Extended Versions

In-Movie Experience with Director Chris Columbus: A picture-in-picture commentary track that also includes storyboards, production stills, and much more. Only available on the Theatrical Edition.

Blu-ray Disc Two (Creating the World of Harry Potter Part 1 – The Magic Begins):
Introduction by Daniel Radcliffe (1080i; 1:54): Radcliffe speaks very quickly, apparently from the set of Deathly Hallows, about what viewers can expect to see in this eight-part series that spans over all eight films.

Creating the World of Harry Potter Part 1 – The Magic Begins (1080i; 62:47): A rather comprehensive look at the book phenomenon, developing the movie, casting, and fan reaction to the first film.

Digital HD Copy: An insert contains a code to redeem a digital copy on Movies Anywhere and UltraViolet retailers. 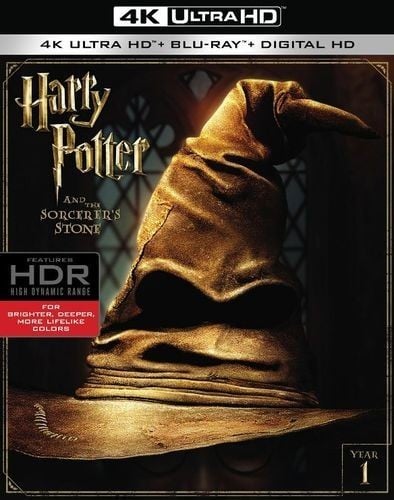