Harry Potter and the Chamber of Secrets benefits from a much more interesting storyline that doesn’t feel like the filmmakers tried to cram as many details from the book as possible (one of the main detractors for the first film in the series). Warner’s new 4K UHD release also doesn’t have the overuse of HDR that plagued the visual quality of the first film.

As Harry Potter (Daniel Radcliffe) tries to deal with spending his summer vacation with his muggle relatives, things get worse when he is greeted by house-elf Dobby (voiced by character actor Toby Jones) who is making Harry’s life even more difficult as the mischievous creature tries everything to keep Harry from returning to Hogwarts for his second year of wizard school. This, of course, backfires when Ron Weasley (Rupert Grint) and his twin older brothers (James and Oliver Phelps) rescue Harry in their father’s flying Ford Anglia and whisk him off to their home just before school is about to begin.

Upon arrival at school, Harry begins to hear voices as students and instructors become petrified by an unknown assailant. Harry, Ron, and Hermione (Emma Watson) soon learn that someone has opened the legendary “Chamber of Secrets,” which can only be opened by an heir of Salazar Slytherin. Harry also stumbles across the diary of a former student, Tom Riddle, which ultimately leads him into the Chamber of Secrets, only to find out Tom Riddle’s true identity.

Chris Columbus returned for this second outing, and is much more confident in his direction on Harry Potter and the Chamber of Secrets, perhaps because he didn’t have to deal with an origin story bogging down the film. The actors are also much more comfortable in their roles, with the trio (Radcliffe, Grint, and Watson – sans wild frizzy hair) commanding the screen. Richard Harris and Robbie Coltrane as Dumbledore and Hagrid, respectively, have much more to do with the plot this time through, and are enjoyable to watch (although this would be Harris’ last time as the Grand Wizard after passing away shortly before the movie premiered). Kenneth Branagh is a delight as the would-be legendary instructor of the Dark Arts, Gilderoy Lockhart. Alan Rickman returns as the mysterious Professor Snape, another memorable role of the late actor.

Much like the first film, Harry Potter and the Chamber of Secrets was shot on 35mm film stock with visual effects rendered in 2k resolution and then digitally printed and completed as a 35mm interpositive. This 2160p transfer is a marked improvement of the previous 1080p transfer, and does not have as many of the issues with the overuse of HDR that plagued Sorcerer’s Stone. Blacks are deep and retain shadow detail, although some visual effects shots are a tad murky, resulting in slightly grey blacks and muted shadow detail. Colors are much stronger and vibrant, with realistic gradations that were a bit lacking in the old Blu-ray edition (include in this set). Fine detail is greatly improved, particularly in the textures of the intricate stone walls of the sets and fabrics used in the costumes.

Harry Potter and the Chamber of Secrets gets an upgraded DTS-X soundtrack, providing more depth to the overall sound design with more precise placement of sound cues and added height channels, providing more natural panning of effects from one end of the listening area to another. LFE presence is a bit stronger, while dialogue is clear and understandable throughout without getting drowned out by music and effects.

As usual with most Warner 4K UHD releases, there are no special features on the UHD disc. Warner has included the 2-disc Special Edition Blu-ray release from 2016.

Blu-ray Disc One (The Movie):
Theatrical and Extended Versions

In-Movie Experience with Director Chris Columbus: A picture-in-picture commentary track that also includes storyboards, production stills, and much more. Only available on the Theatrical Edition.

Harry Potter and the Chamber of Secrets Revealed (480i; 13:02): An extended EPK piece on the making of the film.

TV Spots (480i; 9:01): Seventeen commercials, playable as a whole or each one individually.

Digital HD Copy: An insert contains a code to redeem a digital copy on Movies Anywhere and UltraViolet retailers.

Harry Potter and the Chamber of Secrets is a much better film than the first one. Thankfully, HDR has not been overused on this transfer, revealing a much more refined picture. 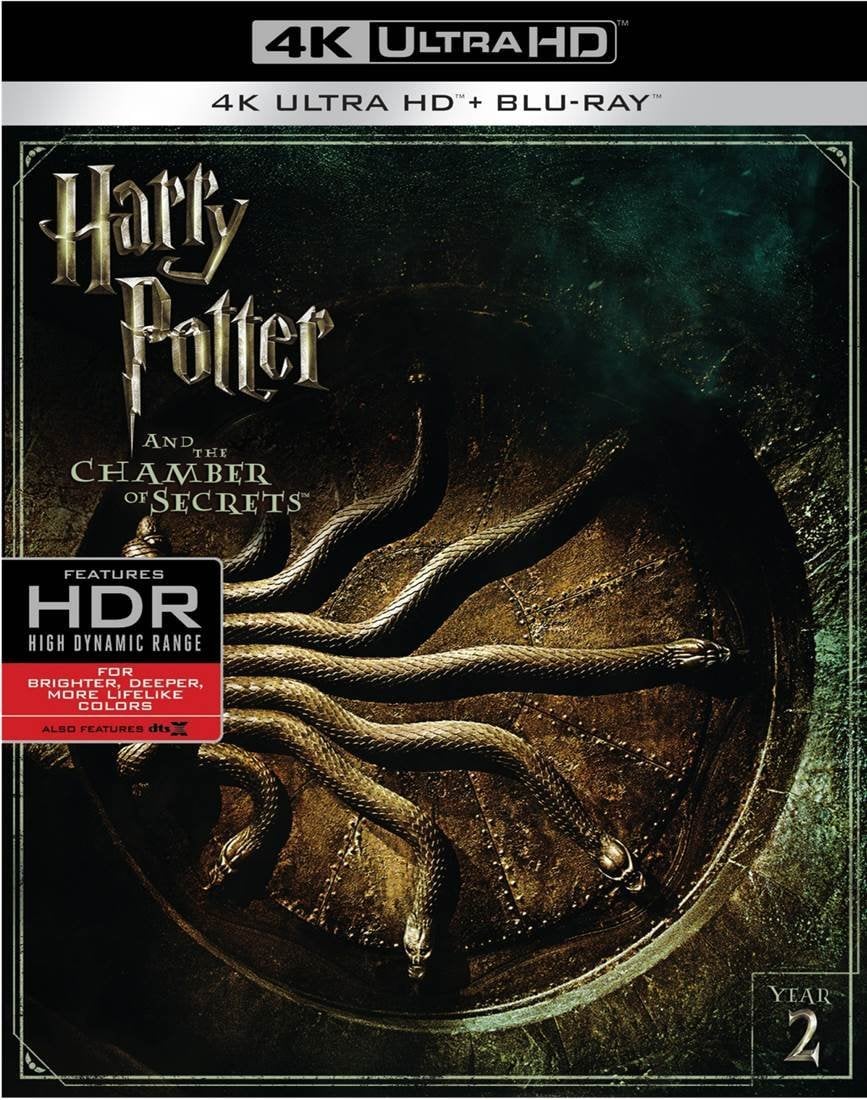