Believe it or not, but co-writer/director Kasi Lemmons’ Harriet is the first big screen telling of the famous escaped slave turned conductor of the Underground Railroad, freeing over 750 slaves during her lifetime. The movie opens in Buckstown, Maryland in the year 1849. Slave Araminta “Minty” Ross (Cynthia Erivo) is newly married to freed man John Tubman (Zackary Momoh). John has hired a lawyer to help enforce an agreement the great-grandfather of her master Mr. Brodess (Mike Marunde) made to Minty’s mother Harriet “Rit” Ross – that she and her family would be freed once Rit turned 45. Now age 57, Rit is still enslaved, and Brodess proclaims that she and her family will remain slaves forever. When the elder Brodess dies, his wife Eliza (Jennifer Nettles) and son Gideon (Joe Alwyn) plan to sell Minty to a plantation further south so that she will never see her family again. Fearing for her life, she seeks refuge from Reverend Green (Vonde Curtiss-Hall), who tells her the route she must take and the people she must find in order to escape to Philadelphia. It is shortly after settling in the city of brotherly love, taking the name Harriet Tubman as her freed name, and becoming acquainted with William Still (Leslie Odom Jr.), documentarian for the Pennsylvania Anti-Slavery Society, she decides to ask Still to help her return to Maryland to free her husband, John. He reluctantly helps her, but finds that John has remarried, thinking she died while trying to escape. Instead, she brings most of her family with her back to Philadelphia. Impressed, Still introduces Harriet to the secretive Underground Railroad, a team of business owners responsible for helping slaves flee the South and find safety in the North.

Harriet does follow the usual historic biopic formula, showing us a brief slice of this famous woman’s life, centering on her transformation from slave to slave freer. Cynthia Erivo definitely has the range to convey this character arc, and her Best Actress nomination from the Academy is well-deserved. The violence is somewhat sanitized, making the PG-13 story a bit more palatable for a family audience, despite the racial epithets and obligatory solo f-bomb.

Harriet was captured at 6K resolution on Sony CineAlta Venice cameras and then completed as a 2K digital intermediate with a 2.39:1 aspect ratio. Universal’s Blu-ray release features a splendid AVC-encoded 1080p transfer that is so good, you have to wonder what a 4K UHD Blu-ray release would have looked like (Universal has skipped a physical 4K release again in favor of a 4K digital). Colors are natural and not overly saturated, often leaning toward a warmer hue of yellows, greens, and browns. Detail is where you might think you were watching a 4K release, with the slave’s outfits looking well-worn and patches very visible, each leaf noticeable in the woods, etc. Contrast is also excellent, with inky blacks and excellent shadow detail in the many darker scenes in the film.

Universal has provided a very immersive DTS-HS MA 7.1 track for Harriet. Exterior scenes come to life with insects, birds, wind, rustling leaves and grass in the surrounds placing the viewer in the environment. LFE gives the gunshots, trotting horse hooves, and the score by Terence Blanchard (BlacKkKlansman) a rich deep end. Dialogue is clear and understandable throughout, placed appropriately within the listening area.

Audio Commentary with Co-Writer/Director Kasi Lemmons: Lemmons is a graduate instructor at NYU Film School, so her communication style is very authoritative and convincing, as she discusses various aspects of the production and Harriet Tubman’s actual life.

DVD Copy: The movie in 480p with Dolby Digital 5.1 audio, plus all of the special features listed above.

It is Cynthia Erivo’s performance as Harriet Tubman that carries Harriet as a very compelling biopic. Universal’s Blu-ray presentation is excellent. 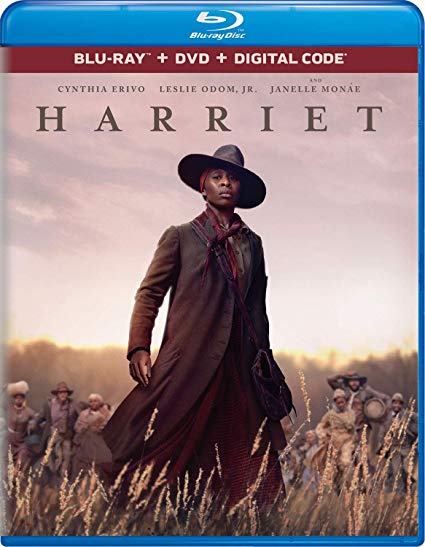