Forum List What's new Dark Style Change width
Log in Register
What's new Search
Menu
Log in
Register
Navigation
Install the app
More options
Dark Style
Close Menu
Posted on February 5, 2016 by Matt Hough
You are using an out of date browser. It may not display this or other websites correctly.
You should upgrade or use an alternative browser.
Star wars of a different sort 4 Stars

Based on a beloved comic book series and traditional animé characters from the last forty years, Shinji Aramaki’s Harlock Space Pirate brings the story and its people into the new millennium with the stunning visuals and enveloping sound afforded to today’s filmmakers.

Based on a beloved comic book series and traditional animé characters from the last forty years, Shinji Aramaki’s Harlock Space Pirate brings the story and its people into the new millennium with the stunning visuals and enveloping sound afforded to today’s filmmakers. While Westerners not already fully conversant with the famous characters will eventually tie the story points together in this somewhat overlong animated space opera, it takes a good hour to get fully immersed in the story and to get the backstories on all of the important characters sorted out. Then, one can settle back and see how this “Star Wars East” works its way around to its hopeful if open-ended denouement.

Almost a thousand years into the future, Earth’s five hundred billion people have left the planet and gone to inhabit other worlds only to find them mostly inhospitable for long-term survival. A return home has led to the “Homecoming Wars” which prevented anyone from returning to the planet, and now the Gaia Coalition makes certain that Earth only serves as a preserve of wildlife and environment while mankind slowly dies out. Captain Harlock (Shun Oguri, David Matranga), an immortal space pirate, has for the last one hundred years been working to turn back time so that people won’t be foolish enough to leave the planet in the first place. Gaia Coalition executive Isora/Ezra (Toshiyuki Morikawa, Mike Yager) has sent his younger brother Yama/Logan (Haruma Miura, Adam Gibbs) to infiltrate Harlock’s crew and either kill him and his crew or send back intel on what his plans are to recapture Earth. Working along with the pirates, however, gives Yama/Logan an insight into their feelings and motivations that makes him less certain that his mission is right or that more dire and dastardly secrets aren’t being withheld from him.

Adapting the characters and stories of Leiji Matsumoto into a more sci-fi friendly tale for the 21st century, Harutoshi Fukui and Kiyoto Takeuchi have concocted a screenplay which includes quite a number of flashbacks which offer backstory on the strained sibling dynamics between Isora/Ezra and Yama/Logan as well as the story of how Harlock came to his present immortal condition. The jumps back and forth are often abrupt for a first timer to the story and may frustrate early-on viewers with short attention spans. Things eventually do become clear, but director Shinji Aramaki seems to be in no hurry to sort out feelings and inspirations enjoying the wide canvas and first-rate CGI animation which bridges the worlds of older animé and more modern computer-generated animated features. Into the script has also been woven quite a few environmental homilies intended to teach gentle lessons about conserving and appreciating what we now enjoy on our world along with character-building lessons to support the wide-ranging battle scenes in space and the combat scenes between heroes and villains. While it’s true that the characters are less dimensional here than in other animated efforts, younger viewers likely won’t mind when the battle scenes in space are so dazzlingly conceived and animated and when the movie has been crowded with unusual creatures and lots of visually inventive vistas that dazzle while also serving to camouflage a few nifty surprises the writers and director have up their sleeves.

Playing the brooding, mostly soft spoken Harlock of the piece, both Shun Oguri in the original version and David Matranga in the international adaptation convey very nicely his lonely, driven, yet strangely reticent nature. Haruma Miura and Adam Gibbs do well with the cocky, impulsive Yama/Logan while Toshiyuki Morikawa and Mike Yager lay on the guilt and vow vengeance equally well as Isora/Ezra. Jessica Boone’s Kei, Harlock’s second-in-command, is more tiresome in her sarcasm than Miyuki Sawashiro is in the original version, but Maaya Sakamoto and Rebekah Stevens are both touching as Nami, the object of affection for both brothers. The most enjoyable of the Arcadia’s crew is Yulian acted with lots of panache by Chikao Ohtsuka and Rob Mungle.

The film’s original theatrical aspect ratio of 2.35:1 is faithfully rendered in this 1080p transfer using the MVC (3D)/AVC (2D) codec. Sharpness, clarity, and detail are first-rate throughout the presentation, and color is nicely handled without any problems with blooming. Black levels, important in a film that takes place mainly in space, are superlative, and there is no banding to be seen in the animation. The movie has been divided into 24 chapters.

3D makes for very impressive senses of depth both deep into space and in an awe-inspiring moment with the camera overhead shooting downward as Yama/Logan climbs up the steep side of a very high mountain. The intricate space battles and arrays of hundreds of spaceships surrounding look very impressive indeed in the 3D version (much less impressive in 2D), but forward projections are almost non-existent. There is a moment early on where some wwater droplets do appear to be traveling outward, but there are many other instances (glass shattering, laser beams going off in all directions) where positive parallax would have given the images even more “pop.” These appear as lost opportunities. There is no problem at all with crosstalk in this presentation.

The DTS-HD Master Audio 5.1 sound mix offers lots of split sound effects throughout as battles rage and lasers fire from all directions. Tetsuya Takahashi’s background score certainly sounds impressive spread through the front and rear channels, and dialogue has been well recorded and has been placed in the center channel. If there is any disappointment at all, it’s with the slightly underwhelming impact of the explosions and all that firepower which is constantly on display. It seems a trifle subdued in comparison to the kinds of bombast that Hollywood action films deliver. Otherwise, however, this is first-rate work.

2D/3D Versions: Both the Japanese and the International discs offer the film in user-selectable 2D and 3D with the same extras listed below on each one.

Shinji Aramaki/Harutoshi Fukui Interview (6:18, HD): interviewed separately, the director and the screenwriter praise each other’s contributions to the finished product.

Leiji Matsumoto Interview (14:00, HD): the creator of the original characters and stories, Leiji Matsumoto answers a series of questions that detail his conception of this world back in the 1940s, his hopes of the film influencing today’s young people, his looking forward to more movies based on the characters, and his attraction for animals (which is how the bird character of Tori-san got worked into the comics).

Shinji Aramaki Comments (4:18, HD): the director explains his attraction to the tales from a young age and recalls spending four to five days apiece with the primary actors as they recorded their dialogue for the movie.

Harutoshi Fukui Comments (3:35, HD): the screenwriter recalls growing up with the comics and expresses his hopes that the late teen audience especially will find things in the movie they can relate to and appreciate.

Venice Film Festival Press Conference (4:09, HD): director Shinji Aramaki’s first comment at the press conference following the world premiere of the film recounting that the movie was five years in the making with a couple of false starts that were originally planned as live action rather than animated features.

Standing Ovation (4:36, HD): the four-plus minute standing ovation the film received at its premiere at the festival.

TV Spots/Theatrical Trailers (HD): six TV spots and four theatrical trailers (including one English-language trailer) must be chosen separately from the menu. There is no “play all” feature.

Twenty-Two Page Booklet: contains a fascinating collection of sketch art and stills along with film historian Julie Kirgo’s enthusiastic essay on the movie.

Harlock Space Pirate is a much more impressive animated space opera in 3D than in 2D, and while the story is a bit more cerebral and the characters more muted than in its Western-produced counterparts, just about anyone who enjoys science fiction can finds things here to appreciate. There are only 3,500 copies of this Blu-ray available. Those interested in purchasing it should go to either www.twilighttimemovies.com or www.screenarchives.com to see if product is still in stock. Information about the movie can also be found via Facebook at www.facebook.com/twilighttimemovies.

Thanks Matt, I'm anxious to give this a spin.

On my weekend watch list. Thanks for the review!

Thanks for the review, Matt. I left some thoughts on this film in another thread. Thought the 3D was superb.

I saw this last year (in 2d) and had a great time with it. I've yet to pick up the 3D version, but I absolutely intend to!
You must log in or register to reply here. 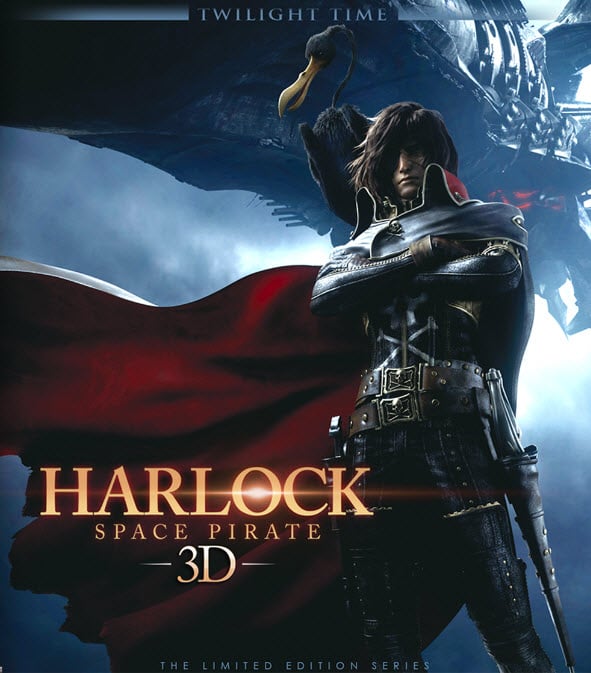