A lame made-for-home video action film in the "spirit" of the original movie 2.5 Stars

Ostensibly an homage to John Woo’s original 1993 action hit, Roel Reiné’s Hard Target 2 makes much of its $4 ½ million budget in some striking action scenes, but it breaks down quite painfully in its narrative structure and flow.

Ostensibly an homage to John Woo’s original 1993 action hit, Roel Reiné’s Hard Target 2 makes much of its $4 ½ million budget in some striking action scenes, but it breaks down quite painfully in its narrative structure and flow. Action star Scott Adkins shows off impressive moves, and there is handsome location photography that offers a real feel for the region of Southeast Asia where it was shot, but even turning off one’s brain for the movie’s duration isn’t enough to make it worthy of one’s time.

After killing his best friend (Troy Honeysett) in the ring during an MMA bout to determine the number one contender, Wes Baylor (Scott Adkins) retreats to Thailand to rethink his life. To earn eating money, he takes on street fights and private exhibitions, but the promise of a million dollar payday from promoter Aldrich (Robert Knepper) lures him to travel to Myanmar, the site of his next fight. On arriving, however, he finds that he isn’t fighting in a boxing ring but rather fighting for his life in a hunt with himself as the quarry and six international hunters as his stalkers. Matador Esparto (Adam Saunders), an American father and son (Peter Hardy, Sean Keenan) on the expedition to make a man of his kid, a gamer (Jamie Timony) interested in experiencing the visceral thrill of the hunt for a new game, and psychotic hunters Sofia (Rhona Mitra) and Maduka (Gigi Velicitat) who think of nothing but killing. As he scurries through the jungle, Wes stumbles on elephant herder Tha (Ann Truong) searching for her missing brother Win (Amarin Cholvibul), the last prey in an Aldrich hunt, and searching for a way to get money to pay a military terrorist to release her village from capture.

The umpeenth variation on the classic short story “The Most Dangerous Game,” the script by Matt Harvey, George Huang, and Dominic Morgan isn’t nearly savvy enough to pass muster. Wes has ample opportunities to dispatch the people after him (early on, he kills a man armed with a knife, a high-powered rifle, and a stun gun and doesn’t take any of those weapons with him when he leaves the man dead), and when he gets close enough to the border to swim across to safety, he remains in the craft being fired on from overhead instead of swimming underwater a few yards to freedom. And the hunters, of course, always gloat over their small victories instead of killing their prey outright and putting matters to an end. But even ignoring these glaring missteps, there isn’t the breakneck pacing and action-filled content to ratchet up tension to the max. Wes and Tha need to take more offensive action to surprise their enemies, but they only try this once. Foolishly, Tha and Wes stop to pray to her jungle god for guidance and protection with the hunters right on their heels (Aldrich has cleverly planted a tracker on Wes so he always knows his location; better to use their down time to think how they’re always being located instead of meditating to a forest deity). In his now-patented style (“adopted” from John Woo), director Roel Reiné punctuates almost every action scene with slow motion climaxes at the height of the action. It’s redundant and off-putting after awhile and drags out already laggard pacing unnecessarily.

Scott Adkins looks very impressive in the Vegas-set MMA match which introduces his character in the film and helped choreograph the three rounds of action before the brutal knockout. Later, he handles himself well in the jungle scenes, too, as he uses MMA skills to deal with enemies who have tons of equipment (jeeps, trail motorcycles, a helicopter) and weaponry (crossbows, guns and rifles of every description) to use against him. Robert Knepper gets to chew the scenery as the promoter who even with every advantage can’t manage to take down one man, growing exponentially in frustration as the movie runs. His second-in-command, the brutish, hulking Madden, is played by Temuera Morrison, and one knows very early on there will eventually be a climactic fighting showdown between him and Adkins’ Wes. Rhona Mitra plays the clichéd tougher-than-any-man Sofia, obviously destined to square off with the only other female in the movie, Ann Truong’s Tha. The movie does admirably resist the expected love story between her and Adkins (though the coda suggests they have actually gotten together off-camera). The other hunters don’t really get enough time to establish characters before they meet their makers though Jamie Timony’s gamer comes the closest to establishing an actual character who might otherwise have been interesting.

This made-for-home video film has been framed at 1.78:1 and is presented in 1080p resolution using the AVC codec. Shot digitally, the images are sharp and clear throughout with close-ups revealing nice detail (even some continuity errors, too, such as a bite that Wes sustains in a street match which isn’t there in the next scene but reappears later). Color is lush and richly saturated with believable skin tones. Contrast has been consistently presented throughout. Only a bit of shimmer in some establishing long shots keeps this from being reference quality video. The film has been divided into 20 chapters.

The DTS-HD Master Audio 5.1 sound mix does an excellent job mixing the cleanly recorded dialogue (placed in the center channel with occasional bits of directionalized speech) with the incessantly driving music by Jack Wall and wonderfully recorded Foley effects which pan across and through the soundstage when appropriate and get the full surround application in the fronts and rears. A couple of explosions during the movie might not quite have the impact one would expect in the LFE channel, but that’s the only real quibble, and it’s a small one.

Audio Commentary: director Roel Reiné offers lots of background information on the 20-day shoot in Thailand (his fourth film which has been shot there). During the commentary, he makes phone calls for comments to his two leading actors Scott Adkins and Robert Knepper and also calls the composer and the camera operator for their memories on the filmmaking experience.

Deleted Scenes (9:47, HD): six scenes may be watched separately or in montage.

Through the Lens (2:23, HD): Roel Reiné, Scott Adkins, Rhona Mitra, and Ann Truong share behind-the-scenes comments on how managing time is the most important element of a successful production.

Into the Jungle on Location (2:25, HD): Roel Reiné praises Thailand for having great locations for shooting films. Rhona Mitra comments on her preference for location rather than studio work, and Scott Adkins comments on how the heat of southeast Asia is great for action filming since performers don’t have to spend as much time warming up before beginning.

Thrill of the Hunt (3:13, HD): the actors who play the hunters in the film stay in character as they express their objectives for this thrilling chase that is about to ensue.

There may be a decent amount of action for die-hard thrill seekers to be found in Hard Target 2, but those with a fondness for the original film won’t be fooled into thinking that this made-for-home video effort is anything but strictly second class. 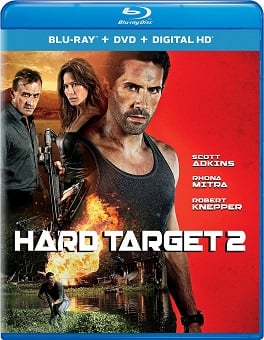