Groundhog Day meets Back to the Future Part II 3.5 Stars

Happy Death Day 2U arrives on Blu-ray from Universal Pictures Home Entertainment with an above-average presentation, but the sequel sucks any joy that made the first film a real surprise.

At the end of Happy Death Day, Tree Gelbman (Jessica Rothe) solved her own murder, thus seemingly ending the time loop that caused her to relive her birthday which also happened to be the day she was murdered. No explanation was given as to what caused the timeloop, and it was assumed that it was a cosmic circumstance having to do with Tree sharing the same birthday with her late mother. Director Christopher Landon (Scout’s Guide to the Zombie Apocalypse) thought it might be a good idea to do a sequel, explaining that it was an experiment that Carter’s (Israel Broussard) roommate Ryan (Phi Vu) and his fellow lab partners were working on that caused Tree to jump to another dimension, where things are slightly different. Carter is dating Tree’s annoying sorority sister Danielle (Rachel Matthews) instead of Tree, Tree’s mother is still alive, and the murderer is a completely different suspect. Tree is once again stuck in a time loop, trying to help solve both the mathematical equation that will end the time loop and send her back to the correct dimension, but also the identity of the serial killer on campus.

The first Happy Death Day was sort of a serial killer/horror movie version of Groundhog Day, with a smattering of dark humor to elevate it somewhat from becoming just another college campus slasher film. Happy Death Day 2U wants to be both Groundhog Day and Back to the Future Part II by constantly revisiting scenes from that first film but from another point of view. It also turns Danielle, who was just an annoying bitch and minor character in the first film and turns her into a real nemesis for Tree while at the same time making Danielle into a cartoonish version of herself. What was humorous the first time around is not necessarily funny the second or third time it is replayed. There is also a montage where we watch Tree commit suicide time and time again as a way to reset the time loop that essentially falls flat. I viewed the first Happy Death Day prior to screening the sequel, as I had never seen either film before, and while I was quite surprised at how much I enjoyed that first film, watching this sequel was a real chore.

Happy Death Day 2U was shot digitally on the Arri Alexa Mini camera system, and translates nicely to Blu-ray. Universal’s 1080p AVC-encoded transfer replicates the film’s theatrical aspect ratio of 2.39:1. Colors are vivid and bold without any hint of blooming. Detail is excellent, from minute textures such as clothing and beard stubble to walls and text on signs. Contrast has been heightened to give the film an off-kilter presence (we are talking about an alternate dimension, after all), yet blacks are inky with strong shadow detail.

The main DTS-HD Master Audio 5.1 track is a solid and enjoyable experience (even if the film isn’t). Dialogue is clear and understandable throughout, and surrounds are implored to recreate background sounds such as crowd noise and nature sounds, but also when Ryan turns on his time loop machine, allowing LFE to deliver the sense of a low sound wave rushing through the room.

What I found very interesting on this release was the different menu design, with the usual main menu selections (Play Movie, Setup, Scenes, Extras) at the bottom, but the Extras also appearing in a window along the right third of the screen. The Special Features also begin automatically upon the completion of the film.

The Never-Ending Birthday (1080p; 2:46): Reuniting the cast, expanding the roles of minor returning characters, and the premise for the sequel.

DVD Copy: The film in 480p and Dolby Digital 5.1 audio, plus all of the special features listed above.

Unfortunately, I found Happy Death Day 2 U to be a chore to get through compared to the first film. Universal’s presentation of the film on Blu-ray is excellent, as expected, but the film and the extras are sorely lacking. 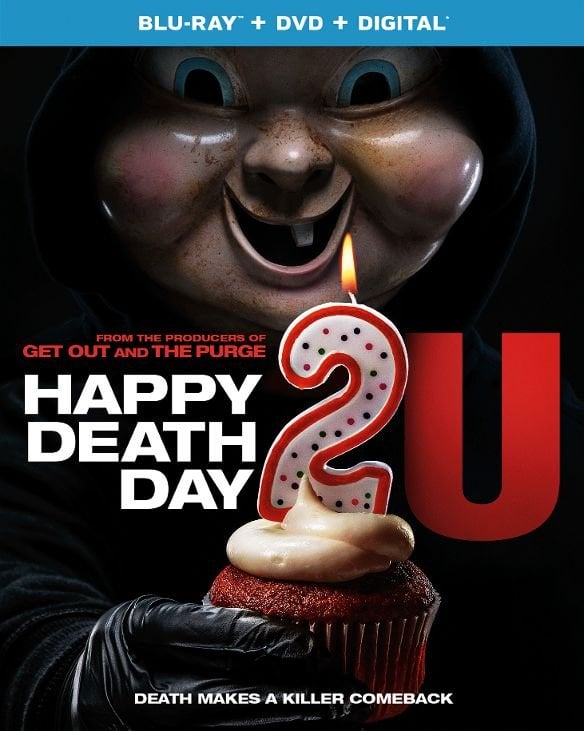