Like many courtroom dramas, Oliver Schmitz’s The Hangman: Shepherds and Butchers focuses as much on character investigation as it does on the nature of the trial itself, and while the verdict is one of those that could truly go either way, it’s the nature of the people involved in the trial that keeps the viewer constantly intrigued to find out more.

Like many courtroom dramas, Oliver Schmitz’s The Hangman: Shepherds and Butchers focuses as much on character investigation as it does on the nature of the trial itself, and while the verdict is one of those that could truly go either way, it’s the nature of the people involved in the trial that keeps the viewer constantly intrigued to find out more. Fine performances and a handsome physical production aid in making this story based on true events consistently engrossing.

Employed for two years as a warder (an escort for condemned prisoners on Death Row) in the Pretoria Penal Institution in lieu of his South African military service, Leon Labuschagne (Garion Dowds) one night cuts off a minibus of seven footballers and murders them in cold blood. He has no memory of committing the crime, and in his near-catatonic state, he won’t answer questions of his counsel John Weber (Steve Coogan), a staunch detractor of the death penalty. At the trial, Weber attempts to describe what the two years of assisting with the almost daily executions have done to the psyche of his client, but prosecutor Kathleen Marais (Andrea Riseborough) and Chief Justice J.P. van Zyl (Marcel van Heerden) continually attempt to lead questions away from the prisoner’s mental state and instead point toward seven innocent victims whose deaths must be accounted for.

Brian Cox’s screenplay is adapted from the novel by Chris Marnewick based on true events of a 1987 trial held while capital punishment was still the law of the land in South Africa. Since the defendant is unable or unwilling to talk to his counsel, the movie’s basic structure is the trial itself, heavily punctuated by extensive, detailed flashbacks as the teenaged Leon Labuschagne gives testimony of what he can remember about his two-year stint as a warder, a time that saw his personality deteriorate eventually driving away his wife and daughter. The meticulous imagery of Leon’s recollections is horrific indeed: his first day on the job escorting seven dead men walking into the hanging room where seven dangling nooses wait ominously for their victims, the piteous cries and whimpers punctuated by the thundering opening of the trap door, the snap of rope, and the gurgling release of bodily fluids and excrement as the men lose final control of their bodies. We’re also treated to executions later in his employment that don’t go as smoothly as those on his first day: where riots break out and billy clubs and strait jackets become necessary tools of the trade and a climactic event on his last day before snapping where an accident transporting coffins to the cemetery leaves Leon stranded with seven corpses and no one to help him with clean up and burial. Director Oliver Schmitz spares nothing and no one in depicting life on Death Row for the warders, presided over by a glowering warrant officer (Deon Lotz) who expects his men to be unemotional automatons, something the sensitive Leon Labuschagne is never quite able to muster (though, to be fair, prosecutor Kathleen Marais paints a somewhat different picture of Leon though it’s not corroborated by any testimony of his fellow warders).

The performance of the film definitely belongs to Garion Dowds as the soft spoken, nearly broken Leon. Tottering unsteadily in both the courtroom and in the flashback sequences on Death Row, Leon often seems near death himself as his facial expressions display a tormented man who’d rather be almost any place else than doing this duty. Steve Coogan gives an impassioned and straightforward interpretation of John Weber, but while the role offers occasional showy moments of courtroom demeanor, it never quite affects us the same way as Dowds’ performance. Andrea Riseborough is all business as prosecutor Kathleen Marais, acerbic and commanding knowing she has the bench on her side in what at first appears to be a slam dunk case for her. Robert Hobbs has some special moments as Weber’s brother-in-law who uses his connections in the penal system to find out some salient facts Weber uses in court. Marcel van Heerden is a very starchy presiding justice, and Deon Lotz makes a firm impression with very few words as Warrant Officer Rautenbach.

The film’s 2.39:1 theatrical aspect ratio is faithfully rendered in this excellent widescreen transfer that’s been anamorphically enhanced for widescreen televisions. Despite some minor moiré patterns, the images are crisp and detailed for a standard definition transfer, and a good upconverting player can really give an air of high definition to this transfer. Color is rich and realistic with skin tones especially vibrant and lifelike. Contrast has been consistently applied, and black levels are exceptional. The movie has been divided into 28 chapters.

The Dolby Digital 5.1 sound mix makes very good use of the aural layout with directionalized dialogue and ambient voices especially well used on occasion. Split surround atmospheric effects (like a thunderstorm in the distance gathering strength as it nears) also bring the soundtrack alive. Paul Hepker’s background score and some choral singing by the wives and mothers of the slain players also punctuate the fronts and rears in an engrossing way.

A courtroom drama of distinction and featuring topics of much political interest, The Hangman: Shepherds and Butchers is a worthwhile film inspired by true events in South Africa. Though only available on DVD, it should make a worthwhile rental for those interested in the subject matter or the actors involved.

That 80 minute listing is straight from IMDB. I don't know where that number came from other than on the packaging or notes from the studio. My listing is the actual time of the disc I watched.

Matt Hough said:
That 80 minute listing is straight from IMDB. I don't know where that number came from other than on the packaging or notes from the studio. My listing is the actual time of the disc I watched.
Click to expand...

IMDb must have updated their info since then as it is currently listed as 106 minutes.
I guess someone messed up the original info as I see the 80 mins runtime repeated here and there. Was a little concerned this had gotten a neutered release.
You must log in or register to reply here.
Share:
Facebook Twitter Reddit Pinterest Tumblr WhatsApp Email Link 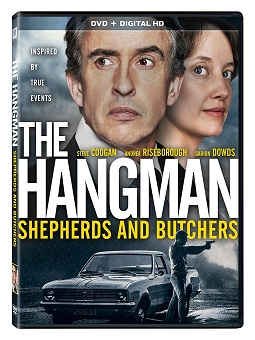