In a career that spanned thirty-four years and championships in four different weight classifications, Roberto Durán holds a special place in boxing history. It’s a shame that Jonathan Jakubowicz’s Hands of Stone isn’t better able to elaborate on the qualities that made the man and the athlete special.

In a career that spanned thirty-four years and championships in four different weight classifications, Roberto Durán holds a special place in boxing history. It’s a shame that Jonathan Jakubowicz’s Hands of Stone isn’t better able to elaborate on the qualities that made the man and the athlete special. With a fractured, unfocused screenplay and nothing unique on the screen in cinematic terms, Hands of Stone emerges as a rather standard movie biography, interesting in parts and certainly with unique characters but nothing that would make it stand apart from the many boxer film biographies which have come before it.

Discovered as an uneducated kid on the streets of Panama fighting for money to keep his starving family afloat, Roberto Durán (David Arosemena as a boy, Edgar Ramírez as an adult) is taken under the wing of promoter Carlos Eleta (Rubén Blades) and trainer Plomo (Pedro Perez) where he begins making a name for himself. But Eleta knows he needs a world class trainer to get near world championship level, and the man for the job is Ray Arcel (Robert De Niro) who had brought championship titles to almost two dozen boxers. But the cocky Roberto mistrusts Arcel because he’s an American, a country he’s not partial to since his American father had abandoned his family when he was a child and America was a thorn in the side to all Panamanians over the rights to the Panama Canal. Their working relationship is thorny, but he leads Roberto to his first title against the reigning lightweight champion Ken Buchanan (John Duddy). But the real challenge comes eight years later when Roberto fighting as a welterweight must somehow conquer one of the most charismatic champions in boxing history, Sugar Ray Leonard (Usher Raymond IV).

Writer-director Jonathan Jakubowicz doesn’t attempt to do a full biography of the man of the title, instead concentrating on basically a decade in Durán’s life when he tastes both sweet victory along with agonizing, humiliating defeat. Though there are patchy sequences with Durán as a kid tussling with American soldiers guarding the Canal Zone and some knockouts between his first and second championships, Jakubowicz also feels the need to focus his film just as much on Ray Arcel’s life during those years of training Roberto along with Ray Leonard’s home life as also a man who must experience the highs and lows of a ring career. With so many characters being tended, it’s no wonder that the film seems overly piecemeal with not enough development of its title character to understand his anger and his bravado hiding intense insecurity about his lack of education and his ring abilities apart from his “hands of stone.” For much of the movie, Durán proves one of the more unlikable champions around which a movie has been structured (insulting and disrespectful barely describe his attitudes outside the ring) until, almost as if by magic, he learns humility in the closing moments of the film. Jakubowicz’s boxing sequences get the job done without being anything particularly special (they’re much too chopped up to get any sense of continuity with the ebbs and flows of an actual long bout with the Buchanan match actually better structured and realistic than either of the Leonard fights) and the “no mas” controversy which swirled around Durán’s quitting in the midst of the second Leonard fight doesn’t get nearly the scrutiny that it should have especially since Durán himself has reiterated time and again that he never said it. There are domestic scenes, too, with the loving but volatile relationship between the fighter and his wife Felicidad (Ana de Armas), and they prove almost more entertaining and certainly more fascinating than the rags to riches ring story which we’ve seen so often before, at least as it’s been directed here.

Edgar Ramírez is convincing enough as a fighter, but he’s considerably larger than Durán especially in the early scenes when he’s playing much younger (and lighter) than his actual age (and one never believes that the young David Arosemena in the 1964 scenes grows up to be Edgar Ramírez in the 1971 scenes). His cockiness and machismo combined with his ease in slipping from Spanish to English gives his Durán believability. Robert De Niro, no stranger to boxing movies, offers an earnest and direct portrait of Ray Arcel, hounded by the mob out of the sport but determined to do right by this talented fighter. A biographical film about his many decades in the sport would likely make for a fascinating movie itself. Usher Raymond IV is a superb facsimile of Sugar Ray Leonard with all of the smoothness and slickness in and out of the ring that made him one of the era’s great sports personalities. Rubén Blades does fine with the too eager promoter Carlos Eleta, and Reg E. Cathey obviously relishes his every sly quip as arch boxing promoter Don King. Ana de Armas is very appealing as the champ’s wife Felicidad aging gracefully and believably from schoolgirl to a vibrant young woman and mother over the course of the film. John Turturro has a couple of cryptic scenes as mob boss Frankie Carbo, an underwritten role that needed far more development, and Ellen Barkin has some adept moments as Arcel’s loving and supportive wife Stephanie. Óscar Jaenada plays court jester to the king as street imp Chaflan.

The film’s theatrical aspect ratio of 2.40:1 is faithfully rendered in this 1080p transfer using the AVC codec. Sharpness is usually outstanding except in a few scenes where it appears the focus puller was not paying attention. Color is rich and full with reds especially vibrant and skin tones always believable. Black levels are also excellent while contrast has been applied consistently for an overall pleasing viewing experience. English subtitles are in white and are easy to read when the characters are speaking Spanish. The movie has been divided into 16 chapters.

The DTS-HD Master Audio 5.1 sound mix finds its greatest immersive moments during the fight scenes when screaming crowds cheering on their favorites get excellent spread through the front and rear channels. Dialogue has been nicely recorded and has been placed in the center channel. Other atmospheric effects don’t get the same degree complex channel manipulation as in the fight scenes, and Angelo Mill’s background score is serviceable but nothing special.

Deleted Scenes (10:42, HD): eight scenes may be viewed together or separately.

“Champions” Lyric Video (HD): two versions of the song written for the film feature Usher and his English lyrics (2:26) and Rubén Blades and his Spanish lyrics (2:32).

In the first of this year’s biographical boxing films to come to home video (Bleed for This is currently in release), Hands of Stone proves to be of only moderate interest. The complex personality at the heart of the movie hasn’t received the kind of psychological dissection which would make for a more honest and more ferocious treatment of the subject, and the examinations into the other people who circle in his orbit are likewise not given enough time and attention for complete satisfaction. The Blu-ray release does offer very good video and audio for those who wish to sample the wares. 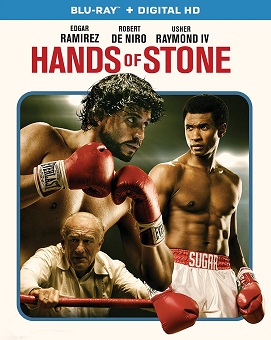