Posted on February 1, 2018 by Todd Erwin
The Best Buy Exclusive is a winner 4.5 Stars

Pittsburgh TV Weatherman Phil Connors (Bill Murray) is sent to Punxsutawney, Pennsylvania to cover the annual Groundhog Day Festival with his new Producer Rita (Andie MacDowell) and Cameraman Larry (Chris Elliott). Phil just wants to get to town, record his segment that morning, and get back to Pittsburgh in time to do his nightly weather report for the 11:00 news. When a blizzard unexpectedly closes the freeway out of town, Phil and his team are stuck in Punxsutawney for the evening, but when he awakens the next morning, he finds that he is reliving the previous day, over and over and over again. At first, Phil is frustrated and confused, as he seems to be the only one who is aware of the phenomena. His inner child quickly takes over, realizing that nothing he does, including taking the police on a car chase through town, kidnapping Punxsutawney Phil and driving head first over a cliff, robbing an armored truck, have no consequences since the day resets itself the next morning. Eventually, he matures, learning from his mistakes, caring for people, and learning talents such as ice sculpting and piano, all before finally learning how to be a better person and lifting the curse so he can move on to the next day.

The casting is one of the key ingredients to Groundhog Day, marking the sixth collaboration between the film’s director, Harold Ramis, and star Bill Murray. Murray is perfect in this role (Ramis had originally considered Tom Hanks), his ability to walk that fine line between being a nice guy and a total jerk throughout most of the film, never giving the audience the complete anticipation that Phil will transform into a nicer human being. Rita is one of the few roles that Andie MacDowell has played that I felt she really was able to show some range as an actress, and she is perfectly charming here. This is one of Chris Elliott’s earlier movie roles, and he’s actually not annoying but still has some good laughs. Although Harold Ramis passed away in 2014 and directed eight more films after this, Groundhog Day still stands as one of his lasting achievements, essentially launching the time loop plot device that has been used to varying degrees in other movies over the years, with Edge of Tomorrow being one of the better ones while the Dana Carvey vehicle Clean Slate may be one of the worst.

Groundhog Day was shot and completed on 35mm film back in 1993, and Sony has gone back and created a new 4K scan from those 35mm elements and regraded using HDR10. The results are like night and day when compared to the 2008 Blu-ray release. Textures and other fine details are much more refined, film grain is more evident but natural and not obtrusive. Colors are more robust. Groundhog Day was never a beautiful film, as it was shot and takes place in the cold bleak of winter with often overcast skies and near-snowing conditions, but the movie has never looked better than it does here on this new 4K UHD Blu-ray.

Sony has given Groundhog Day an audio upgrade to Dolby Atmos, which some may scratch their heads and wonder what Atmos could add to what both Ron Epstein in his 2002 DVD review and Richard Gallagher in his 2009 Blu-ray review said were sonic improvements in the DVD’s Dolby Digital 5.1 and Blu-ray’s Dolby TrueHD 5.1 tracks over the original 2-channel matrixed Dolby Surround used in its original theatrical engagement, but still followed the typical comedy mix of dialogue front and center with music and sound effects mixed throughout the remaining channels. This new Atmos mix opens up the sound stage further, filling the room more naturally and subtly. Don’t expect anything bombastic or demo-worthy, but this is still an improvement over the previous 5.1 mixes.

All of the special features are found on the included 2009 Blu-ray release.

Groundhog Day is currently available as a Best Buy Exclusive on 4K UHD Blu-ray, selling for $24.99 as of the date of this review, but can be found on Amazon and other online retailers via third party at much higher prices. If you’re a fan of the film yet somehow do not already own it on Blu-ray and have UHD capability, I recommend picking this up! 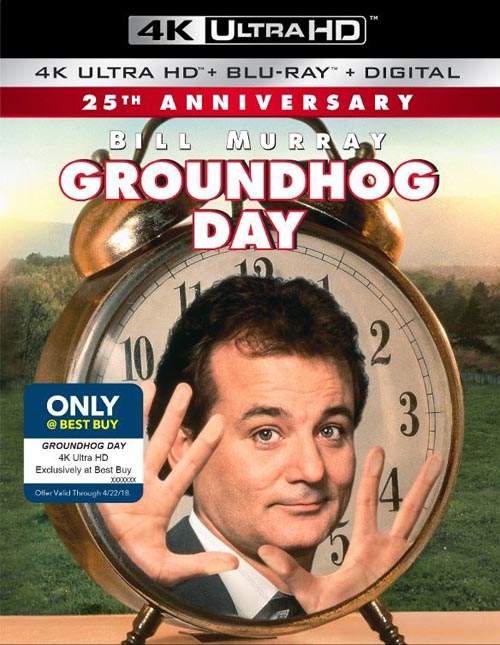