Gringo has its charms and surprises, but it parries when it should embrace, and hedges when it should let loose. It also misses an opportunity for snappier dialogue that would have played up the danger and the comedy. Still, it is an entertaining enough film with enough chuckles to make it worth checking out. In addition, David Oyelowo’s comedic prowess is something of which I hope we get to see more.

“I know I’m not supposed to touch the mini-bar but I’m going to do it. You know, I don’t even care anymore, I’m doing it. I’m having the merlot!”

Harold Soyinka (David Oyelowo) works for the pharmaceutical company, Promethium, under his friend, Promethium CEO, Richard Rusk (Joel Edgerton).  Harold is a trusting, honest man whose innocent view of the world makes him easy to take advantage of, which is exactly what his wife is doing spending all his money while sleeping with Soyinka’s boss, Rusk. When Soyinka is asked to head to Mexico, the territory he oversees, with his duplicitous boss and the evil-tongued co-boss, Elaine Markison (Charlize Theron), he’s rightly concerned. He has suspicions that a merger is on the horizon which would threaten his job, but that’s not even the half of it. Things going awry quite quickly on the trip and Soyinka find himself mixed up in drug cartels, kidnappings, and hitmen, without a clue of how to handle himself.

Gringo is a movie that is good at times, but it never risks being anything more. It’s far too laid back to threaten running away with its ideas. It saunters more than sprints through the predicaments into which it places Oyelowo’s Soyinka. Performances are all strong and the easygoing nature of the pace works in its favor at times, but it lacks a vital dose of energy at key moments that would have injected a much-needed zip here and there. Gringo also would have benefitted from much more of Charlize Theron’s Elaine Markison, with her mean tongue and penchant for very funny takedowns and pithy, disquieting insults.

As dark comedies go, Gringo let’s its wicked side show, but not enough to realize its full potential. The plot has lots of calculating characters that get tripped up by misfortune, and it exploits the comedy of errors effectively at times, but it feels like its just scratching the surface. A few twists here and there in the story are welcome, though not entirely unpredicted.

Gringo may offer us a familiar set of predicaments, but it gives us a superb cast to do it. David Oyelowo, a brilliant dramatic actor, is worth the price of admission alone as he delivers a warming, endearing blend of naiveté and disbelief. He’s a delight to watch wander aimlessly into situations beyond his understanding and to waffle, with bemusement and befuddlement, as he grapples with his incredulity. Oyelowo surely must further explore comedy because he is a natural, mining his dramatic performance gifts for the right amount of pathos. Joel Edgerton, another accomplished actor, delivers a performance in command of his comedy. Charlize Theron is impressively vicious and often has the best lines within the scenes she’s in. Supporting players, including Thandie Newton, Amanda Seyfried and Sharlto Copley, offer fine performances as well.

Gringo has its charms and surprises, but it parries when it should embrace, and hedges when it should let loose. It also misses an opportunity for snappier dialogue that would have played up the danger and the comedy. Still, it is an entertaining enough film with enough chuckles to make it worth checking out. In addition, David Oyelowo’s comedic prowess is something of which I hope we get to see more.

Universal’s Gringo on Blu-ray, like the film, is good not great. A good display of fine details, strong use of colors, with cooler, bluer colors for the city (Chicago), warmer with oranges, reds, greens and yellows for the locations south of the border. While there is good detail and effective color balance, there’s no pop. Some scenes appear soft (could be by design, but doesn’t really seem like it), and some of the lowlight scenes wobble. Overall this is a good image that shines in some key areas, notably levels of detail and color, but has some things that hold it back.

Gringo has been provided a 5.1 DTS-HD Master Audio track that suits the film. Dialogue is clear, music is balanced nicely, and the occasional surround sound makes use of the available tracks.  Ambient sounds of streets, office scenes and such are presented effectively, and deep bass makes a strong play at key moments giving your subwoofer something fun to do.

A very light collection of special features that run about 15 minutes in total. They include a look at Oyelowo’s character, the stunts, location shooting and a 4+ minute that covers the production. Nothing of depth or real value here.

The Stunts of Gringo

The Making of Gringo

Digital Copy redeemable only at Amazon

Gringo is likeable, driven largely by a great cast and Oyelowo’s very appealing portrayal of the befuddled Harold. However, it fails to live up to its potential. When it’s written well, it works wonders, but the great moments are too few to bring it all together to something more memorable. It is worth watching? Sure, but it could have been far more memorable and fun with some adjustments. 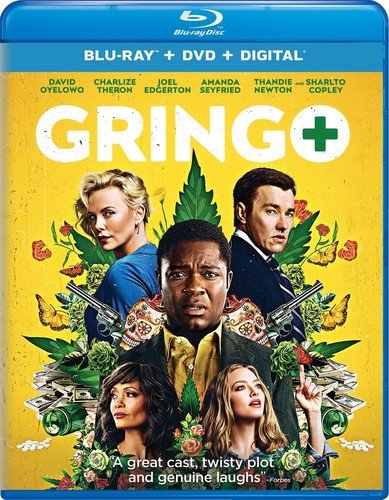