Gremlins arrives on 4K UHD Blu-ray, just in time for Halloween and Christmas.

Inventor Randall Peltzer (Hoyt Axton) purchases a new pet as an early Christmas present for his teenage son, Billy (Zach Galligan), at a gift shop in Chinatown. The grandson of the store owner gives Randall three rules he must follow in order to keep the Mogwai: Don’t expose him to bright light, don’t get him wet, and never ever feed him after midnight. Randall brings him home to Kingston Falls, a Capra-esque town that has fallen on hard times with high unemployment and a bank owner (Polly Holliday) that wants to foreclose on the entire town, and Billy immediately names him Gizmo (vocalizations by Howie Mandel). Unless you’ve lived under a rock for the last 35 years, you know what happens – the rules get broken fairly quickly and all mayhem breaks lose in the town.

With the success of E.T.: The Extra-Terrestrial and Poltergeist, filmmaker Steven Spielberg became something of a brand in the mid 1980s, launching his production company Amblin Entertainment, and producing mid and large scale movies under the banner “Steven Spielberg Presents,” mostly for both Warner Bros and Universal, giving many directors their first chance at making a studio picture. Robert Zemeckis, Matthew Robbins, Kevin Reynolds, William Dear, Gary David Goldberg all got their big breaks at Amblin Entertainment, and Gremlins proved to be director Joe Dante’s big breakout in the summer of 1984. Dante came out of Roger Corman’s New World Pictures, first editing trailers for the little studio that could and eventually getting to direct his first film, Piranha, in 1978, which was almost shelved when Universal threatened to sue Corman for the film being too close to Jaws. The lawsuit was withdrawn when Spielberg saw Piranha, calling it the best Jaws spoof he had seen. Dante would go on to direct the werewolf film The Howling, another big hit, this time for Avco-Embassy. Those two films convinced Spielberg to hire the up and coming director to helm Gremlins and a segment from Twilight Zone: The Movie. Gremlins, from a script by Chris Columbus (who penned many of the 1980s Amblin productions before becoming a director himself), has become something of a quintessential classic piece of 1980s cinema. It’s a mixture of horror and dark sly comedy, as Dante crams the screen with blink and you’ll miss them pop culture references. The Mogwais and Gremlins were, at the time, a technical achievement in creature design by Chris Walas (who had worked with Dante previously on Piranha). The movie’s violence, though, angered many parents who thought they were taking their kids to another E.T. like adventure, and it was both Gremlins and Indiana Jones and the Temple of Doom, both rated PG and released within weeks of each other, that prompted the MPAA to create the PG-13 rating, for better or worse.

I’ve always enjoyed Gremlins, and it was this film along with his segment from Twilight Zone: The Movie (the third one, It’s A Good Life) that introduced me to the director’s work, and have been a fan ever since.  The movie is filled with Dante’s signature, the dark and sometimes bizarre comedy, taking a ludicrous idea and running with it (and selling the audience on it), placing pop culture references subtly within the frame, etc. Gremlins also includes many of Dante’s usual repertory of actors and celebrities, such as Dick Miller and Jackie Joseph as the Futtermans (who would get a much larger role in the sequel), Chuck Jones, Belinda Balaski, Kenneth Tobey, and in a stretch Kevin McCarthy in a clip from Invasion of the Body Snatchers. Gremlins was also the second film in what would be a long collaboration between Joe Dante and composer Jerry Goldsmith, creating one of his most recognizable themes, the Gremlins Rag.

For me, Gremlins has always looked soft on home video, from laserdisc to DVD to Blu-ray, with the Blu-ray being almost indistinguishable from DVD. I had high hopes that this new (and true) 4K release would finally present Gremlins in a more faithful presentation. Director of Photography John Hora used a lot of filters when he shot Gremlins, plus smoke was used to diffuse the shots in hopes of hiding wires and other practical effects, thus giving the film an overall softness, which appeared more like a haze on earlier video format releases. Warner’s new 4K transfer is presented here in a 2160p HEVC encode with HDR10 in the 1.78:1 aspect ratio (despite the packaging specs indicating 1.85:1). This is a very film-like presentation, with noticeable and organic film grain. This is still a relatively soft image, but there is much more apparent detail and less haze than ever before. Colors are natural without ever appearing over-saturated. Contrast is slightly improved, although blacks often appear as dark grey, yet still retain a lot of shadow detail (the climax inside Montgomery Wards is a good example). This is the best this movie has ever looked.

Gremlins on 4K UHD contains a DTS-HD MA 5.1 track that sounds identical to the Dolby TrueHD 5.1 on the previous Blu-ray. For what likely started as a 70mm 6-track Dolby mix from 35 years ago, it still sounds pretty darn good. Dialogue is clear and understandable throughout, the improved fidelity and dynamic range gives Jerry Goldsmith’s mostly electronic score more room to breathe, and LFE is adequate for 1984. The track also has nice directionality and active surrounds when needed. While I was hoping for a new Atmos mix, this track will suffice. For fun and out of curiosity, though, I did play back a few scenes with DTS Neural:X engaged. Chapter 12 (where the Gremlins break loose in the attic while Mom is baking cookies) was a real joy, as the Gremlins did sound as if they were above me while Mom was still in the kitchen.

With the exception of the two Audio Commentary tracks, all of the Special Features can be found on the included original Blu-ray release.

Audio Commentary with Director Joe Dante, Producer Michael Finnell, and Special Effects Artist Chris Walas: Included on both discs, this is the more technical commentary of the two, as the three men discuss the technical challenges of making the movie.

Audio Commentary with Director Joe Dante and Actors Zach Galligan, Phoebe Cates, Dick Miller, and Howie Mandel: Also included on both discs, this is the more entertaining of the two, as the actors join in and discuss what it was like on the set while Howie Mandel talks about voicing Gizmo as his first-ever voice-over role, all while Dante keeps the track very lively.

Photo Gallery (1080p): 30 stills in all, mostly production stills plus a few very small and hard to read storyboards.

Trailers (480i; 4:42): Two theatrical trailers for Gremlins and a teaser trailer for Gremlins 2: The New Batch.

Gremlins is a film that has remained in my top 20 all-time favorites, and Warner’s new 4K UHD release is the best it has ever looked. 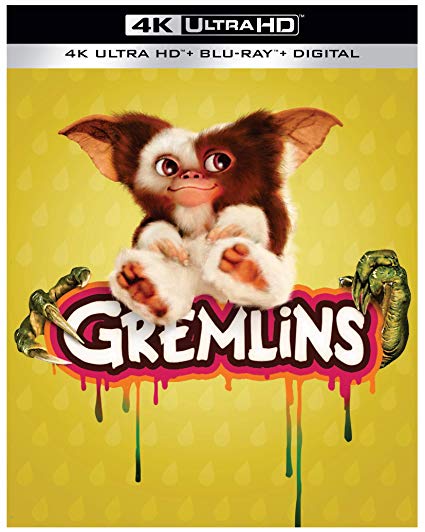