Forum List What's new Dark Style Change width
Log in Register
What's new Search
Menu
Log in
Register
Navigation
Install the app
More options
Dark Style
Close Menu
Posted on March 8, 2021 by Todd Erwin
You are using an out of date browser. It may not display this or other websites correctly.
You should upgrade or use an alternative browser.
Intense disaster flick 4 Stars

One of the most popular recent VOD releases due to the pandemic (it grossed over $32 million in at-home rentals alone), the disaster film Greenland has arrived on Blu-ray from Universal Pictures Home Entertainment.

Structural engineer John Garrity (Gerard Butler) is making amends with his family after a brief separation, moving back in with his wife, Allison (Morena Baccarin) and diabetic son Nathan (Roger Dale Floyd). While out grocery shopping with his son, John receives an emergency call from the Department of Defense, alerting him that he and his family have been chosen for emergency shelter from a comet named Clarke that is headed towards Earth, with fragments expected to strike the planet, and to await further instructions. During a party at the house, John receives that further update after it appears that the comet and not its fragments are headed for an extinction-level impact, and is informed to report to Warner Robins Air Force Base with his family, and no one else.  This sets up an intense setoff sequences as John and his family try to make their way to the Air Force Base, are separated, and then must try to regroup to make the journey together to long-rumored underground fallout shelters in Greenland as quite literally all hell breaks loose.

As with most disaster flicks, Greenland does take some leaps of improbability. What the Garrity family endures during their journey to regroup often seems far-fetched or happens as nothing more than a plot point. Of course, just as they are about to board, Nathan leaves his insulin in the car, to name one incident, but there are many more that fall into spoiler territory. Once the comet fragments start impacting the planet, the movie becomes relentlessly intense, something I found almost exhausting. The performances are what help drive this movie, and Gerard Butler, Morena Baccarin, and Scott Glenn (in a small supporting role as Allison’s father) are excellent. The visual effects are, for the most part, extremely well-done, although there are a few shots where explosions are very noticeably computer generated.

For whatever reason, either STX (who had US theatrical and digital distribution) or Universal (who handled physical media distribution for STX) or possibly both decided to release Greenland on Blu-ray rather than 4K UHD Blu-ray (the movie is available in 4K digital which is also included in this package). That is a bit of a shame, because as good as this Blu-ray looks, the 4K digital excels dramatically. There are a few minor instances of banding (most noticeable in the opening logo for production company Anton), and some instances of noise in darker sequences. Colors are consistent but not always accurate, but that is an artistic choice as the image becomes more and more tinged with yellow as the planet continues to get bombarded with comet fragments. The same can be said about contrast levels, although the 4K HDR digital does do a better job of handling black levels. The Blu-ray is not unwatchable, and most will find it very pleasing and satisfactory, but the included 4K iTunes copy included in the package simply blows it away.

This is where the Blu-ray excels over the iTunes 4K digital. The DTS-HD Master Audio 7.1 track is most definitely reference quality (and a shame that a Dolby Atmos mix was not included or created), while the included iTunes 4K digital only provides a Dolby Digital+ 5.1 mix. This is a no-holds-barred, very aggressive mix, with almost deafening LFE (you may want to turn down that subwoofer first) and immersive use of all seven available speaker channels, as comet fragments travel almost seamlessly from all angles (except overhead). Dialogue is clear and understandable throughout. This is a demo-worthy mix.

As with most STX releases, the special features are rather minimal.

Audio Commentary with Director Ric Roman Waugh and Producer Basil Iwanyk: The two discuss the production, casting, story, visual effects, and releasing the film during the COVID-19 pandemic. The audio quality of the commentary track suffers due to it being recorded via Skype or similar technology.

Humanity (1080p; 1:20): An EPK behind the scenes trailer for the film, as expected on most STX Blu-ray releases.

Digital Copy: An insert contains a code to redeem a 4K digital copy on iTunes/Apple TV, plus on the reverse side is a Universal All Access Rewards code that can be redeemed for 1200 points.

Greenland is an intense, sometimes exhausting disaster movie with strong performances. The 4K digital will give you the best picture, but the Blu-ray provides a reference-level and demo-worthy 7.1 mix. Choose wisely.

Regarding the digital copy, can it be redeemed directly on iTunes or is it a MA redemption code?

Tino said:
Regarding the digital copy, can it be redeemed directly on iTunes or is it a MA redemption code?
Click to expand...

It is an iTunes/Apple TV code. STX is not a member of MA.
You must log in or register to reply here. 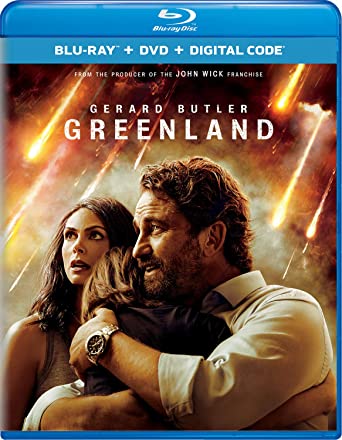