In 1962, Tony Vallelonga aka “Tony Lip”(Viggo Mortensen) finds himself temporarily unemployed from his job in “public relations” at the Copacabana Club in New York when the club closes for several months for renovations.  Fortunately for Tony, his no-nonsense, fearless approach to his job as a bouncer puts him on the radar of the record label managing the Don Shirley Trio.  Dr. Donald Shirley(Mahershala Ali) has been booked for a concert tour of the United States, including the Deep South, and Tony is hired to provide needed security for the musician.

The film’s title is derived from the Negro Motorist Green Book, an actual directory that listed hotel accommodations available for non-whites in the segregated Southern United States.  Tony uses the guide book as reference in their travels in finding hotels that will accept Dr. Shirley as a guest.
Tony and Dr. Shirley are something of an odd couple, and their differences are not all as expected.  Dr. Shirley lives in a metaphorical castle in lodgings above Carnegie Hall where he sits upon an actual throne.  Tony Lip has a blue collar existence with his family in a home where the closest thing to a throne would be a commode.  Dr. Shirley is well versed in classical music while Tony Lip is more familiar with Little Richard and Aretha Franklin than the musician.  This implausible dynamic would seem far-fetched were it not based in fact, as Dr. Shirley and Tony Lip did actually tour the United States in this fictionalized account of their journey.
Green Book is both entertaining and thought provoking in its presentation of the journey of the musician and his bodyguard.  The fine supporting cast also includes Linda Cardellini(Scooby Doo, Freaks and Geeks) as Tony’s wife Dolores.  Mahershala Ali received the Academy Award for Best Supporting Actor for his portrayal of Donald Shirley, and the film received the Award for Best Picture for 2018.  Director Peter Farrelly(Dumb and Dumber) collaborated on the screenplay with Brian Currie(Con Air) and Tony’s son Nick Vallelonga.
Donald Shirley and Tony Lip came from very different worlds, but their time together helped them both develop mutual respect and understanding and a lifelong friendship thereafter.  As most art reflects the era in which it is created, it is not surprising that the AMPAS embraced this film in selecting it at Best Picture of 2018, since the Academy must have felt that the world we live in today could benefit from the tolerance, respect, and understanding that came into being between Donald Shirley and Tony Vallelonga.

Green Book appears on 4K UHD in its original 2.00:1 aspect ratio.  This is a sublime presentation in 4K with exceptional fine detail, excellent shadow detail, and hues that only UHD can provide.  Certain aspects of the clarity of image should be credited to DP Sean Porter(Green Room) with everything kept in focus and exquisitely timely changes of focus within scenes as dialogue shifts between characters in foreground and background.  4K images can only do so much if the camera lens is out of focus, and everything was done right in the visuals on this film.

The English Dolby Atmos audio is up to the same high standard as the visuals.  The sound mix shifts perspective, as it should, when camera angles change, and directional audio is employed well at intervals.  There is a lot of music on the soundtrack, and the Dolby Atmos audio serves it well with exceptional fidelity.

Special features include the following:
Virtuoso Performances(4:10):  This brief featurette has leads Viggo Mortensen and Mahershala Ali speaking about their portrayals of the real life personas, with backup from Tony’s son Nick Vallelonga, director Peter Farrelly, and executive producer Octavia Spencer.
An Unforgettable Friendship(5:09):  Tony’s son Nick, actors, and producers talk briefly about the lifelong respect and friendship that developed between Tony and Dr. Shirley.
Going Beyond The Green Book(4:20):  Postal worker and author Victor Hugo Green is highlighted in this discussion about segregation from historians and the producers of the film.
Also included is a Blu-ray disc and a paper insert with validation code for digital download of the film via the Movies Anywhere App.

Green Book offers fine performances from its cast and an interesting story of the travels of Tony and Dr. Shirley.  The video and audio presentation are flawless on 4K UHD.  The special features are minimal.  Green Book is a story of love, friendship, tolerance, and understanding, and demonstrates that these principles belong to all time, and should not be limited and confined to any historical era.

Thanks for the review, Timothy!

This is a film I've had pre-ordered as soon as it went live.

I'm looking forward to seeing what it's all about...compounded by the "surprise" (to some) win as Best Picture 2019.
Expand signature
There's Jessie the yodeling cowgirl. Bullseye, he's Woody's horse. Pete the old prospector. And, Woody, the man himself.Of course, it's time for Woody's RoundUp. He's the very best! He's the rootinest, tootinest cowboy in the wild, wild west!

The Dog in the Dentist Chair -- the new book by Peggy Frezon
Reactions: PMF, SAhmed and Tino

Yes, thanks for the review as I watched this film twice at the movie theater including my latest viewing last week. I'm waiting on a price drop so I'll either buy this later on in the year during Black Friday sales or purchase the 4K/HDR stream/download from iTunes that will propagate to other services as part of MA.
Expand signature
Crawdaddy's favorite "The Mandalorian" Quotes: "This is the Way" and "I have Spoken"

Thanks for the review, Timothy. I saw this in the theater and really enjoyed it. I have it pre-ordered via Amazon.
Reactions: atcolomb and PMF
T

Good review. I saw this in the theater during the holidays and will make this one a birthday buy in June...on 4K!!!!
Expand signature
The Acid Queen Still Rocks and Souls!!!! ;D
Reactions: atcolomb and PMF

Just view the movie from my local library. Liked the film and the performances and it did remind me a little of Driving Miss Daisy. The movie also had some extra meaning because of what's been in the news recently.
You must log in or register to reply here.
Share:
Facebook Twitter Reddit Pinterest Tumblr WhatsApp Email Link 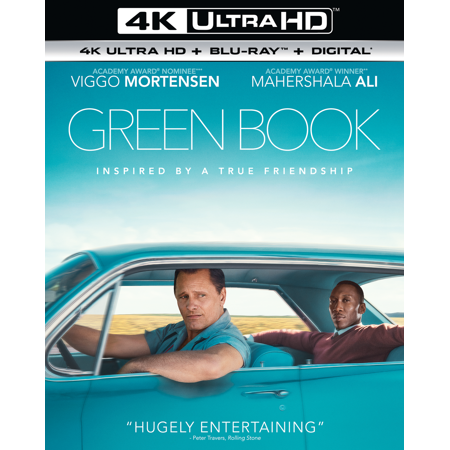