Posted on December 14, 2016 by Todd Erwin
Scorsese's mob classic gets some respect 5 Stars

Upon its release in 1990, Martin Scorsese’s Goodfellas became an instant classic, a part of our pop culture, yet to this day is timeless. Released multiple times across almost all platforms (VHS, LaserDisc, DVD, Blu-ray), it wasn’t until last year’s 25th Anniversary release that the film got the respect it deserved. With this new UHD release, that respect is returned in spades.

For as long as I can remember, I always wanted to be a gangster. – Henry Hill (Ray Liotta)

With that opening line, Martin Scorsese’s Goodfellas, based on the book Wise Guy by Nicholas Pileggi, takes us on a journey of life as a member of an organized crime family, circa late 1960s to early 1980s, through the eyes of Henry Hill (Ray Liotta). The film is a masterpiece in character study, not just of Henry, but also of James Conway (Robert De Niro), who takes Henry and Tommy DeVito (Joe Pesci) under his wing. These wise guys are middle management, led by Paul Cicero (Paul Sorvino), and that is what helps distinguish it from Francis Ford Coppola’s Godfather series. It’s a look at the working stiffs in the mob, the guys who make things happen (for good or bad), and how that power and corruption can lead to paranoia.

There is not one bad frame, not one bad performance in Goodfellas. Ray Liotta was a virtual unknown when he was cast in the lead as Henry, with supporting roles in short-lived television series (Casablanca, Our Family Honor) and movies (Something Wild, Field of Dreams). De Niro, in his sixth collaboration with Scorsese, is at the top of his game in what is, essentially, a supporting role. Pesci, who would take home a Best Supporting Actor Oscar for this role, came out of retirement to play the crazed, comedic relief (“Do I amuse you?”), leading to starring roles in My Cousin Vinny and Jimmy Hollywood, as well as scene-stealing roles in the Lethal Weapon and Home Alone series of films. Scorsese and Pileggi would return to the mob world five years later in Casino, and as good as that film is, it never quite captured the magic in a bottle that was Goodfellas.

For the 25th Anniversary Blu-ray release, Warner Bros. went back to the original negative and created a new transfer in 4K, supervised by director Martin Scorsese. It is that transfer that appears here, with HDR, and what a beautiful transfer it is (with the film’s original WB logo intact). Black levels are exceptional from the moment the movie begins, as Henry pulls over to the side of the road so he, Jimmy, and Tommy can investigate what is making that thumping sound from the trunk. Fine shadow detail is retained, not only in this sequence, but throughout the film. Colors are much more natural and vibrant, but never oversaturated. Film grain is also retained, a welcome sight for this reviewer, but there may be some who may feel that it softens the picture (those who think anything in 4K should be crisp and pristine). This is how movies shot on film should look, and one can only hope that studios will begin digging much deeper into their catalog to give us more classics in this format.

Goodfellas was released theatrically with a Dolby Stereo SR (Spectral Recording) surround track, and was remixed for the 25th Anniversary release in DTS-HD Master Audio 5.1. That same soundtrack appears on this UHD release, giving the film a much wider dynamic range than it ever had before. The 5.1 remix also provides a much wider soundstage, with more precise stereo separation than it did in its original stereo mix. Dialogue is clear and understandable (even when characters naturally speak over each other), directed mostly to the center channel. Surrounds are used sparingly, likely to replicate the film’s original sound design.

Although not clearly identified on the packaging, this is a 3-disc set, containing the film and audio commentaries on both UHD and Blu-ray, plus a second Blu-ray disc chock full of extras (it’s the same extras disc from the 25th anniversary set). Sadly, the 36-page book of film and production stills and a letter from Scorsese were omitted for this release.

I Like Mountain Music (480i; 7:02): Classic black and white Looney Tunes cartoon

Digital HD Copy: An insert contains a code to redeem a digital copy through Ultraviolet partners. If redeemed through Vudu, users get access to a streaming UHD version of the film.

Goodfellas represents how classic films should appear on UHD, and hopefully this title will be successful enough for more deep catalog titles to be released from all of the major studios. Highly Recommended. 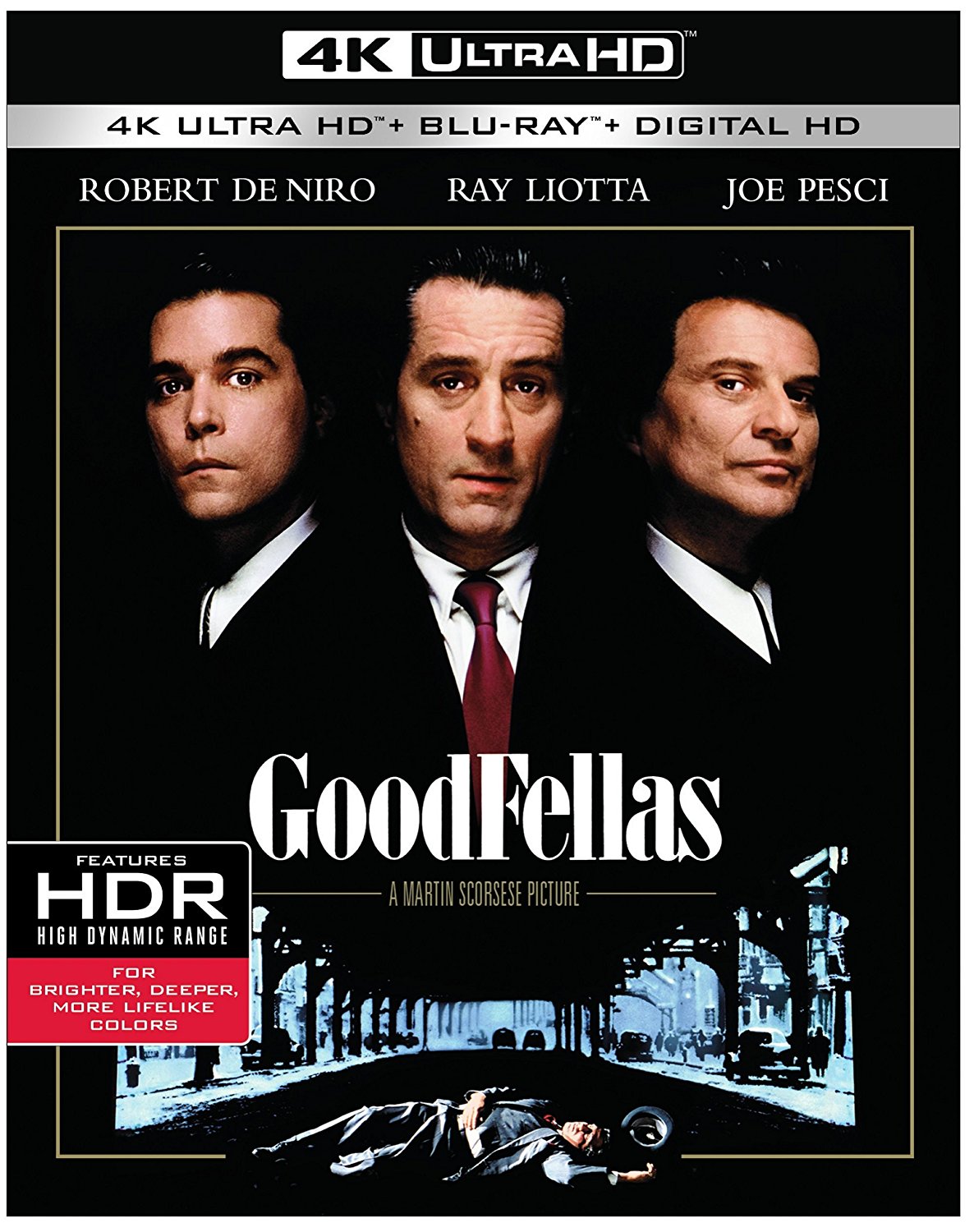