Forum List What's new Dark Style Change width
Log in Register
What's new Search
Menu
Log in
Register
Navigation
Install the app
More options
Dark Style
Close Menu
Posted on January 14, 2021 by Matt Hough
You are using an out of date browser. It may not display this or other websites correctly.
You should upgrade or use an alternative browser.
Snappy song and dance spectacular has never looked nor sounded better. 4 Stars

The 1947 version of Good News is another of the triumphant Warner Archive Technicolor Blu-ray releases bringing all of the musical’s color and fun to the screen in its brightest possible light.

Everyone’s favorite college musical Good News was brought to the screen for the first time by MGM in 1930 after wowing Broadway audiences in 1927 as one of a new breed of musical comedies which were leaving the established operetta form behind in a wave of nostalgic dust. MGM had originally intended remaking the musical as a vehicle for their new teenaged stars Mickey Rooney and Judy Garland, and it remained on their feature schedule for several years until the team had finally disbanded as each star went on to new cinematic pastures solo. Arthur Freed and his co-producer Roger Edens pulled the title from mothballs for a new musical team June Allyson and Van Johnson, but by the time the movie was ready to be produced, Johnson, one of the top ten box-office stars in America, was too busy with other projects and contract player Peter Lawford was substituted. While the substitution was merely adequate, the movie was nevertheless one of the feel-good features of post war America with a bevy of hit tunes, a pert and perky cast, and Technicolor as the cherry on top of a rich, satisfying sundae.

Languages major Connie Lane (June Allyson) has her heart set on football captain Tommy Marlowe (Peter Lawford), but he’s immediately smitten with the vain, calculating Pat McClellan (Patricia Marshall) who doesn’t feel he’s got enough wealth or social status for her. Trying to impress her, Tommy learns some French from Connie while the two realize they have feelings for each other, but when campus flirt Babe Doolittle (Joan McCracken) intimates to Pat that Tommy is heir to a pickle fortune, Pat changes her tune much to Connie’s dismay. Tommy’s infatuation with Pat, however, causes his grades to drop, particularly in French, and so Connie is called upon to tutor him so he can pass his midterms and play in the big football game for Tait College.

Broadway librettists Betty Comden and Adolph Green were recruited to Hollywood to pen their first screenplay for a movie musical, and while they retained six songs from the Broadway show and kept the basic plot, some extra characters and songs were added making the 1947 Good News quite its own creation apart from the stage version (indeed, there’s not much about the movie from hairstyles, fashions, or the musical arrangements that speaks to the 1920s; this is a 1940s musical all the way). By making Tommy interested in French rather than astronomy, it allowed the team to pen a charming new song for the movie “The French Lesson” (music by associate producer Roger Edens) which not only cleverly sets up the Connie-Tommy relationship but creates one of the movie’s most notable sequences (and allowed mostly non-singer Peter Lawford a chance to perform a song without having to sing much). Elsewhere, the music highlights the film time after time from the opening title song (staged unimaginatively by first-time director Charles Walters: this was the first sequence he filmed for the movie with his inexperience clearly showing, but his creative juices began flowing much more freely in subsequent numbers) through “Lucky in Love” as the principals each sing of their romantic longings (Walters taking his camera weaving in and among the college students), the jitterbuggy “Pass That Peace Pipe” (written for Ziegfeld Follies but fitting in just fine here as a soda shop production number), and the rousing, toe-tapping climactic “The Varsity Drag” which is one of the highlights of all MGM musicals with splendid dancing from a very talented and quite sizable group: the stars, the supporting characters, and the ensemble.

This was the zenith of June Allyson’s musical career at MGM. She was versatile enough to be able to handle comedy and drama as well as song and dance, but apart from “Thou Swell” in Words and Music, the studio didn’t do much with her musically after this until The Opposite Sex almost a decade later. She’s heartbreaking in “Just Imagine” and perkiness-personified in “The Best Things in Life Are Free” while handling her parts in the group numbers with aplomb. Peter Lawford himself admitted he was ill-equipped for the occasional musical in which he found himself, and he’s not being modest: apart from his looks, he’s the weak link in the musical cast of the picture. Better are ingénue Patricia Marshall as the vampy Pat McClellan (in a role intended for Gloria DeHaven) and sensational dancer Joan McCracken as Babe who excels in all of the film’s dance numbers. Ray McDonald partners her in a couple of dances, but his exceptional talents as a tapper aren’t given full measure here. Neither is Mel Tormé in the first of a three-picture deal for him as a college sheik, his “Velvet Fog” utilized most notably in a late reprise of “The Best Things in Life Are Free.” Donald MacBride and Tom Dugan make amusing football coach and trainer, Clinton Sundberg is his always reliable self as the snappish French professor, Loren Tindall is an endearing beefy lug with a crush on Babe, and Robert Strickland, who was the object of great desire for Judy Garland in Girl Crazy, now becomes the stuffed shirt, undesirably snooty Peter Van Dyne III here.

The film’s original theatrical aspect ratio of 1.37:1 is faithfully reproduced in this 1080p transfer using the AVC codec. Bright and snappy (one might think occasionally too bright in a couple of shots), the film has never before looked so good on home video. Color is beautiful, solid, and consistently hued (reds and greens are particularly vibrant) while the colored debris and reel change cues from the DVD are long gone. Flesh tones are gorgeous, and the image is sharp throughout except in close-ups where the glamour photography of the era takes over to soften unwanted lines.

The DTS-HD Master Audio 2.0 mono sound mix offers solid and clear fidelity. Dialogue has been beautifully recorded, and song lyrics, music, and sound effects have all been blended together with professional surety. There are no discernible instances of hiss, flutter, pops, or crackle to distract from one’s enjoyment of the film.

Deleted Song (4:56, SD): written for the film by Edens, Comden, and Green, “An Easier Way” offers the contrasting views on love from Connie and Pat.

Radio Promotion (4:43): June Allyson answers some questions about her life and the film in this brief promotional ad.

The 1947 version of Good News is another of the triumphant Warner Archive Technicolor Blu-ray releases bringing all of the musical’s color and fun to the screen in its brightest possible light. Highly recommended!

Great review, Matt! Thanks so much, you're making me giddy with anticipation for this release!
P

Thank you for the excellent review Matt.
I am really looking forward to this Blu joining my collection as I have ever only seen segments of the movie.

Excellent review. One of my favorite musicals. My pre-order has been in for a week.

Thanks for your bright review, Matt! So looking forward to seeing this energetic musical on Blu-ray, especially with the intricate vocal arrangements by Kay Thompson and the dazzling, swirling choreography by Robert Alton. It's a delight!
R

Blu-ray.com gives the movie itself 3 stars and calls it 'disposable.' It's one of my favorite films. Ouch.

Hang on. Blu-ray.com gives it 5 stars for video quality and says: "The real good news for fans is Warner Archive's terrific new Blu-ray, which is highlighted by one of the label's very best 1080p transfers to date. It's jaw-droppingly good."

Clearly someone was trying for a laugh because of Ms. Allyson's product endorsement - Of course I would NEVER step in to that mess ... Don't feel bad as I think he missed the whole point of the movie in that review. It's a nostalgic, stylized homage to something that was already considered antique by 1947, which is its whole reason for being. It's exuberant (if highly lacquered) Technicolor comfort food and delivers precisely on what it promises, built in cliches and all.
You must log in or register to reply here. 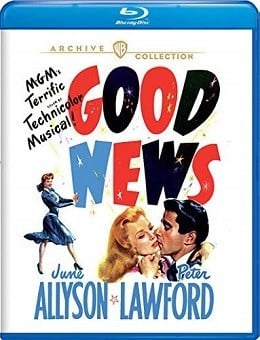