Posted on November 20, 2019 by Todd Erwin
Inappropriate and Not Funny 2.5 Stars

The creators of Good Boys apparently think having sixth grade boys use profanity, drink beer, and other adult situations is funny enough to carry a 90 minute movie. It’s not.

Three best friends embark on an epic 4-mile adventure, ditching school to replace the drone Max (Jacob Tremblay, Wonder) accidentally destroyed when they were trying to spy on two teenage girls. The drone belonged to Max’s father (Will Forte), who expressly forbid Max to touch the drone while he was out of town on a business trip. The three boys call themselves “The Beanbag Boys,” and often feel awkward at school. Max has a crush on Brixlee (Millie Davis), Thor (Brady Noon) is an aspiring singer, and Lucas (Keith L. Williams) has just learned that his parents are getting a divorce. When Max is invited to a Kissing Party by “cool kid” Soren (Izaac Wong), and knowing that Brixlee will also be attending, is what sets the adventure in motion.

Writers Lee Eisenberg & Gene Stupnitsky (who also directed) have our young cast dropping f-bomb after f-bomb while also occasionally drinking beer and raiding a parent’s closet of sex toys and placing them in precarious situations (like crossing a freeway during rush hour) for much of the films 90 minute running time. I did not laugh once, not even a chuckle or a smile. Somewhere underneath all the profanity and sex jokes lies a story about three 12-year old boys who must suddenly come to terms that their friendship will change as puberty beckons. I really wish the latter was the main focus, as that may have made for a better movie. Unfortunately, it’s not.

Good Boys was captured at 2.6K and 3.4K resolutions on Arri Alexa Mini and SXT cameras, presumably completed as a 2K digital intermediate. Universal’s AVC-encoded 1080p transfer retains the film’s theatrical aspect ratio of 2.39:1, and is a slight disappointment from the studio, who has had an excellent track record of late with their new Blu-ray releases. Overall, it is not a bad transfer, with vivid colors that are not oversaturated, sharp detail, and decent contrast and black levels. There is some minor noise that creeps into the picture now and again, noticeable if you are looking for it.

Good Boys comes with a default DTS-HD Master Audio 5.1 track that, unfortunately, is a pretty standard front-heavy comedy mix. Surrounds are used ever so sparingly, even during the freeway crossing scene and the drone chases. LFE is also weak, not really supporting the film’s occasional use of music. Dialogue is clear and understandable throughout.

Most of the extras are nothing more than EPK fluff, and the commentary is quite boring, as well.

Alternate Ending (1080p; 2:00): Not all that different from the ending the creators eventually decided to use.

Welcome to Vancouver (1080p; 1:07): Apparently star Jacob Tremblay lives and even went to school where the movie was shot.

Bad Girls (1080p; 1:45): A brief look at the two teenage antragonists of the film played by Molly Gordon and Midori Francis.

Audio Commentary with Director/Co-Writer Gene Stupnitsky and Producer/Co-Writer Lee Eisenberg: The two men joke a lot in this track as they discuss the making of the film, often laughing at their own jokes.

DVD Copy: The movie in 480p and Dolby Digital 5.1 audio, plus all of the special features listed above.

I struggled to find any humor or entertainment value out of Good Boys. For the curious, I’d recommend a rental first. 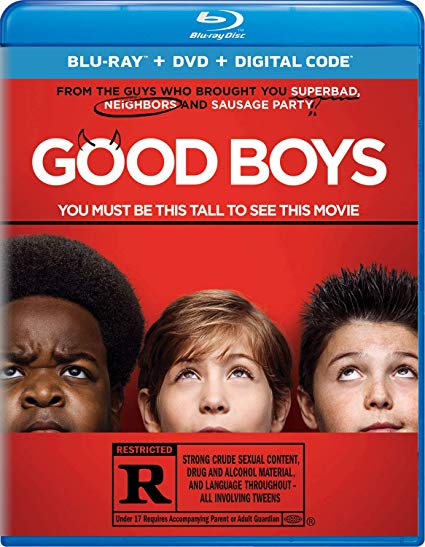