Forum List What's new Dark Style Change width
Log in Register
What's new Search
Menu
Log in
Register
Navigation
Install the app
More options
Dark Style
Close Menu
Posted on March 19, 2021 by Todd Erwin
You are using an out of date browser. It may not display this or other websites correctly.
You should upgrade or use an alternative browser.
Great Atmos track 3.5 Stars

To prepare audiences for the upcoming Godzilla vs. Kong, Warner has released Gareth Edwards’ 2014 feature Godzilla on 4K UHD Blu-ray.

This is the fourth time Gareth Edwards’ 2014 film Godzilla has been reviewed on Home Theater Forum. Cameron Yee reviewed the 2D Blu-ray release, giving the movie 3.5 stars, while Ron Epstein and I both reviewed the 3D Blu-ray. Although Ron paid more attention to the 3D aspect of that release than the movie itself, he more or less panned it while I offered the movie a generous 3 stars. All three of us, though, pretty much agreed that the film came up short in many of its battle scenes with the titular monster, Godzilla. The following installment in the franchise, Kong: Skull Island, fared much better with its 1970s throwback, fun performances, and thrilling action sequences. Yet, the last installment, Godzilla: King of the Monsters, was overstuffed with plot, but at least had some thrilling set pieces with Godzilla.

Godzilla was captured at 2.8k resolution using Arri Alexa Plus 4:3 cameras and completed as a 2K digital intermediate in the 2.39:1 theatrical aspect ratio. Warner has upscaled that 2K digital intermediate to 2160p with HDR10 high dynamic range. This is still a very dark looking film, with contrast (thanks to HDR) getting the mot noticeable improvement. This is not as murky as the previous standard Blu-ray release (included in this set), and colors are the next slightly noticeable improvement, allowing for a bit more pop thanks to the wider color gamut in the BT.2020 color space. Detail receives a very minor uptick, more noticeable in brighter daytime sequences.

This is where the disc really shines, with its new Dolby Atmos mix created “specifically for the home theater environment” as noted in the studio’s press release. It takes the already reference quality 7.1 mix and turns it up to 11. This is a much larger and wider soundstage, allowing sounds to travel even more seamlessly than on the Blu-ray’s DTS-HD MA 7.1 mix. LFE is also much stronger (that is not to say the Blu-ray’s was anemic), with Godzilla’s footsteps becoming even more pronounced. Height channels are very evident, from fighter jets flying overhead to Godzilla smashing buildings during POV shots from the ground. Dialogue remains clear and understandable throughout.

Nothing new in this release (not even a trailer for Godzilla vs. Kong on the 4K disc) – the same features are included on the original Blu-ray release.

Digital Copy: An insert contains a code to redeem a digital copy in UHD on Movies Anywhere.

This new 4K release of Godzilla receives a half-point increase over my previous overall score for the 3D Blu-ray release solely for the new Dolby Atmos track.

Fun guilty pleasure movie for my son and I, but it doesn't sound like it's really worth the upgrade outside of the Atmos track. Might consider picking it up near the end of the year if it's on sale over Black Friday.
You must log in or register to reply here. 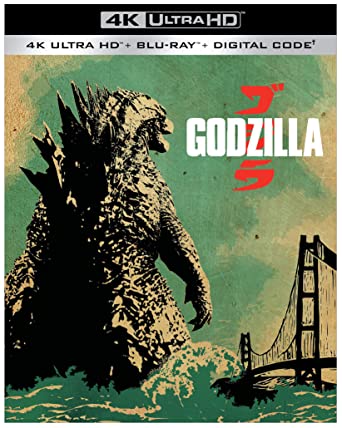