Alex Proyas’ Gods of Egypt, a bloated action-adventure fantasy, is definitely eye candy (especially in 4k), but suffers from dull and unoriginal storytelling and ridiculous dialogue.

Gods of Egypt supposes that gods and man lived side by side, in an Eden-like paradise presided over by the god Osiris (Bryan Brown), who is about to turn over his crown to his son, Horus the god of the air (Nikolaj Coster-Waldau) in a spectacular coronation ceremony. But that ceremony is interrupted by Osiris’ brother, the desert god Set (Gerard Butler), who assassinates Osiris and takes the source of Horus’ power by removing his eyes. Blind and emasculated, Horus escapes to his father’s tomb, feeling sorry for himself. Set has the mortals enslaved to build monuments to himself. Two of these mortals are Bek (Brenton Thwaites), a young thief, and his true love Zaya (Courtney Eaton). With Zaya’s help, Bek breaks in to Set’s treasure vault to steal back Horus’ eyes, and while escaping, Zaya is killed by an arrow, sent on a journey to the afterlife. Bek and Horus strike a deal: Bek will restore Horus’ eyesight and help him defeat Set, and in return Horus will retrieve Zaya from the afterlife, but there’s a deadline, as this all has to be accomplished before Zaya crosses over. There’s one other problem – Bek was only able to retrieve Horus’ right eye, Set is using the left eye as a means of increasing his power (and taking the power of any other gods that will not bow down before him).

Are you keeping up with the story? I know I sure had a hard time following this action-filled soap opera, finding many of the action sequences rather dull and uninspired, despite the artistic beauty of the second-rate CGI visual effects (whose seams are even more evident in this 4k upscale). You can’t really fault the acting, though, as the mostly European and Australian cast give it their all, fully-embodying their characters and delivering their lines as straight as possible. Lines like “I can understand killing for a throne, but this is madness,” “I tore the wings off my wife. Imagine what I’ll do to you,” “I’m the goddess of love. If I don’t do this, I am nothing!” and “Soon I will rule over all of the world.” The screenplay by Matt Sazama and Burk Sharpless is filled with zingers like those, and tries to retrofit and reimagine Egyptian legends in to a superhero origin story, and it just does not work. Director Alex Proyas, who made two classics early in his career, The Crow and Dark City, manages to do what he does best, give the audience something stylish to look at, despite shooting the film mostly on soundstages surrounded by bluescreen, but we’ve seen this all before in better movies (gulp) like the remake of Clash of the Titans and Prince of Persia, which Gods of Egypt constantly reminded me of.

Although Gods of Egypt was captured at 6k resolution during production, the movie was completed as a 2k digital intermediate. What we have here on Lionsgate’s 4K UltraHD release has been upscaled to 4k and re-timed using high dynamic range. The result is a slight improvement over the 1080p Blu-ray, allowing for a minimal increase in detail (note the intricate fabrics used in the costumes, the beard stubble on Coster-Waldau’s face), more natural colors, and better contrast with deeper blacks and brighter whites. The CGI work suffers, though, with the increase in resolution, with the Blu-ray being more forgiving to some of the effects shots than the UHD version. The most glaring example is the shot of Bek and Zaya escaping in a chariot, where it is very obvious that the actors were shot in front of a bluescreen and the background was artificial – it almost appears like a rear projection shot on the UHD version.

Gods of Egypt includes a very active DTS-X soundtrack, backwards compatible with DTS-HD MA 7.1. This track will really give your system a workout, with head-spinning discrete surround effects that seamlessly pan from front to back and vice versa, even when folded down to a 5.1 configuration. LFE rumbles to life quite frequently, so much so that it’s nice that Lionsgate also included a DTS 2.0 stereo track for night time listening. Dialogue is also clear and understandable throughout, very rarely getting lost in the mix.

The 4k UHD disc contains no special features whatsoever. Those can all be found on the included 1080p Blu-ray edition.

A Divine Vision: Creating a Cinematic Action Fantasy (1080p; 11:48): An overview on the development and making of the movie.

Of Gods and Mortals: The Cast (1080p; 10:52): Executive Producer Kent Kubena discusses casting the film, along with interviews with the cast.

On Location: Shooting in Australia (1080p; 12:44): A look at shooting at the Fox Studios in Sydney, as well as a few of the exterior locations used in the film.

The Battle for Eternity: Stunts (1080p; 11:328): A look at some of the action sequences, using both previs and behind the scenes footage.

A Window Into Another World: Visual Effects (1080p; 10:58): A look at the visual effects created for the film.

Gods of Egypt may have been one of the biggest box office disappointments so far this year ($31 million domestic, $114 million worldwide gross on a $140 million budget), but looking at this 4k UHD release (as well as the indidual 3D Blu-ray and 2D Blu-ray releases), you would never know that with the abundance of special features. The disc excels the most with its audio mix, which is the same mix included on the 2D Blu-ray. The increase in resolution and color space is minimal, with the Blu-ray being more forgiving of some of the weaker visual effects shots. It’s a tough call, but if you are not interested in the 3D version and want to future proof yourself, go for the UHD version if the cost is only a few bucks. 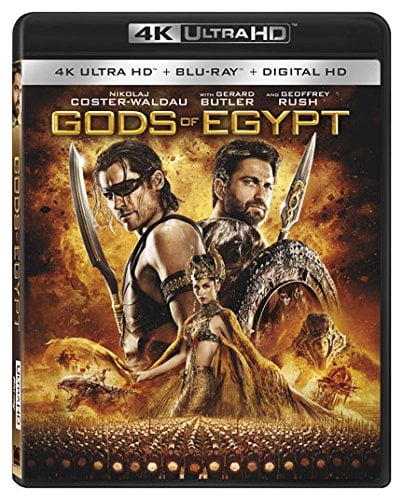