Posted on May 24, 2016 by Matt Hough
A unique musical drama with stupendous performances 4 Stars

In her final completed film, Judy Garland triumphs dramatically and musically in I Could Go On Singing. With its raw, honest emotions and its unique perspective into the psyche of a woman who is alive on stage but floundering when off it, the movie has easily stood the test of time.

For those who were never fortunate enough to see the legendary Judy Garland live in concert, Ronald Neame’s I Could Go On Singing offers about the nearest approximation to the spine-tingling electricity the lady could produce in person that can be found in her thirty-plus filmography. The four concert numbers presented during the movie offer Garland in a variety of moods, completely appropriate to the dramatics which surround them, but on their own offering a one-of-a-kind opportunity to see what the performer could do best: presenting popular songs to a mass audience while insinuating herself into them in such a way that it seemed as if she were singing only to you.

Legendary concert singer Jenny Bowman (Judy Garland) takes the opportunity while appearing at the London Palladium to seek out her former lover Dr. David Donne (Dirk Bogarde) and take her first look at the child they had together more than a decade earlier and which she had given over to his father while she continued touring the world with her concerts. David isn’t anxious for mother and son to meet, but at her insistence, he takes her to son Matt’s (Gregory Phillips) boarding school where she’s instantly charmed by his fresh-faced openness and is eager to spend time with him. When David is called away on an emergency medical case in Rome, Jenny and Matt spend two glorious days together which validates in Jenny’s mind that her son needs her and she needs him and which sets up a certain angry confrontation with Matt’s father once he returns to London.

The screenplay by Mayo Simon certainly bares similarities to the actual life of Judy Garland who waged continual war against her estranged husband Sid Luft over her own fitness as a parent to two underage children while she toured the world earning a living for all of them. Perhaps that’s why the movie’s narrative sequences, spare as they sometimes are, ring so true especially for those who are familiar with the rocky domestic situation that was to mark the last decade of Judy Garland’s life. Those dramatic moments, bolstered by the fiery and tumultuous performances of Garland and Dirk Bogarde, certainly haven’t dated the film at all and give it more than a reason for existence. But it’s the four on-stage song sequences at the London Palladium that remain the film’s highlights, each one not only individually entertaining and mesmerizing but also each one (as Cabaret would later do but with much more élan) mirroring the emotional texture of the character at that particular given moment in the script: buoyant and optimistic in “Hello, Bluebird,” thoughtful and hopeful in “It Never Was You” (recorded live during filming and showing director Ronald Neame’s supreme understanding of Garland’s mystique as the staging frames the singer and her accompanist on opposite ends of the frame and then slowly embraces the singer as she gets to the heart of the plaintive Kurt Weill melody), defiant and angry in “By Myself” (staged moodily in near total crimson echoing her passion for her child though costume designer Edith Head let the star down by garbing her in a terribly unflattering tight dress emphasizing Judy’s size in all the wrong places), and the survivor anthem “I Could Go On Singing” (written by her “Over the Rainbow” scribes Arlen and Harburg but sadly not a song that had a lasting impact in her career as she had hoped it would).

While it’s generally acknowledged that Judy did her best on-screen work in George Cukor’s A Star Is Born, her performance in I Could Go On Singing must come a close second in sheer artistry and emotional impact to that Oscar-nominated tour de force. While she may occasionally pour on the volume where finesse might be more appropriate, she nevertheless unleashes a musical and dramatic performance of great power and intensity: honest, raw, and ultimately poignant. Dirk Bogarde is more than up to the challenge of meeting her force field head-on without flinching, and his performance is achingly real and heartfelt: fighting to save their son from her indulgences and megalomania while also admitting that he does love and admire her despite himself. Gregory Phillips makes for a very appealing pre-teen Matt. Jack Klugman has a wonderful role as Jenny’s manager and performs it admirably while Aline MacMahon is likewise solid as a rock as Jenny’s assistant Ida.

The film’s original Panavision aspect ratio of 2.35:1 is faithfully presented in this 1080p transfer using the AVC codec. Despite a few specks here and there and black levels that are sometimes a bit chalky, this transfer is eons ahead of any previous release of this movie on home video. Sharpness is superb, and color is spot-on with lifelike and very appealing skin tones. Contrast has been consistently applied for an often startlingly good high definition image. The movie has been divided into 24 chapters.

The DTS-HD Master Audio 2.0 mono sound mix is typical of the era, but engineers have cleaned up the track wonderfully so that any possible hiss or crackle is gone leaving only crystal clear dialogue, the marvelous score where Judy’s voice really shines with Mort Lindsey’s masterful musical direction (he was the conductor of her concerts at the time and appears as himself during the concert scenes), and the occasional atmospheric effects.

Audio Commentaries: historians Nick Redman and Lem Dobbs welcome the film’s producer Lawrence Turman who reminisces candidly about the troubled film and many others he produced during his prodigious career. A second track features more direct analysis of the movie by historians David Del Valle and Steven Peros. For fans of the movie, both tracks are irreplaceable and infinitely interesting.

Isolated Score and Effects Track: presented in DTS-HD Master Audio 2.0 stereo (including Garland’s vocals which offer an interesting stereo contrast in the concert sequences to the mono originals heard in the movie).

Six-Page Booklet: contains some black and white and color stills, original poster art on the back cover, and film historian Julie Kirgo’s thoughtful commentary on the movie.

In her final completed film, Judy Garland triumphs dramatically and musically in I Could Go On Singing. With its raw, honest emotions and its unique perspective into the psyche of a woman who is alive on stage but floundering when off it, the movie has easily stood the test of time. There are only 3,000 copies of this Blu-ray available. Those interested in purchasing it should go to either www.twilighttimemovies.com or www.screenarchives.com to see if product is still in stock. Information about the movie can also be found via Facebook at www.facebook.com/twilighttimemovies. 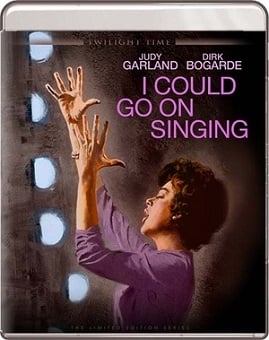