Glory tells the story of the 54th Massachusetts Volunteer Infantry, the first black regimen to fight for the Union during the Civil War under the leadership of Colonel Robert Gould Shaw (Matthew Broderick). Having survived the harrowing Battle of Antietam (the bloodiest battle of the war with combined casualties exceeding 22,000), Shaw is offered the appointment of commanding a unit of all-black soldiers, training them with the assistance of his best friend Major Cabot Forbes (Cary Elwes) and Drill Sergeant Major Mulcahy (John Finn). Eager to sign up for this volunteer squadron is the freed and intellectual Thomas Searles (Andre Brauer), also a friend of Shaw’s, and escaped slaves John Rawlins (Morgan Freeman), Jupiter Sharts (Jihmi Kennedy), and Trip (Denzel Washington). The film is based on the books Lay This Laurel by Lincoln Kerstein, One Gallant’s Rush by Peter Burchard, and the personal letters of Robert Gould Shaw (which are used in narration). Shaw soon realizes he has his work cut out for him, and that his superiors are determined to undercut him and his regimen at every opportunity. The army cuts his soldiers’ pay from $13 to $10; supply officers hold back required shoes, uniforms, and weapons; Col. James M. Montgomery (Cliff DeYoung) and Gen. Charles Garrison Harker (Bob Gunton) even rope in Shaw’s regimen to assist in the pilfering of southern towns for their own gain until Shaw and Forbes call their bluff by threatening to expose them to the War Department.

Glory is quite possibly Broderick’s best dramatic performance (prior to this he was best known for War Games and Ferris Bueller), and there are fine performances all around, with Denzel Washington winning his first Oscar for Best Supporting Actor as Trip. The film features beautiful cinematography by Freddie Francis (Dune, The French Lieutenant’s Woman) and a stirring score by James Horner.

Sony continues to release stellar catalog titles in 4K UHD Blu-ray, and Glory is no exception. This true 2160p transfer with HDR10 high dynamic range from 35mm film elements is a truly film-like experience, with organic grain structure left intact, so much so that it is much more evident (yet not the least bit distracting) than on the included 2009 Blu-ray release. Colors are more vivid and natural, with much more discernible color gradients (the main title card blends from gold to red much more subtly here than on the Blu-ray or even the video commentary found on the UHD disc). Contrast is greatly improved, with nighttime exteriors getting a nice boost in overall shadow detail.

I first saw Glory in 70mm during its original theatrical run in 1989, and thought the “Dolby Six-Track Stereo” mix was very impressive. That track translates over to this new Dolby Atmos mix extremely well, adding a bit more depth to its sound design, providing a much wider aural experience. Sounds are more precisely placed and move much more seamlessly throughout the viewing/listening area, such as flying cannonballs and artillery fire. James Horner’s score also sounds more spacious, with heights used to fill out the room. LFE is very good for a film from this era, with a nice balanced low-end that never feels overbearing. Dialogue is clear and understandable throughout. Sony has also included a 5.1 and 2.0 stereo mix in DTS-HD MA.

UHD Disc:
Video Commentary (1080p; 122:14): This picture-in-picture commentary track has been ported over from the 2007 2-disc DVD release, and is presented here in 1080p. It features most of director Edward Zwick’s original audio commentary (available in its entirety, sans PiP, on the Blu-ray), plus comments from Matthew Broderick and Morgan Freeman.

The Voices of Glory

Glory continues Sony’s track record of catalog titles on 4K UHD Blu-ray, with outstanding video and audio, and bringing back an older video commentary from a prior DVD release. Recommended. 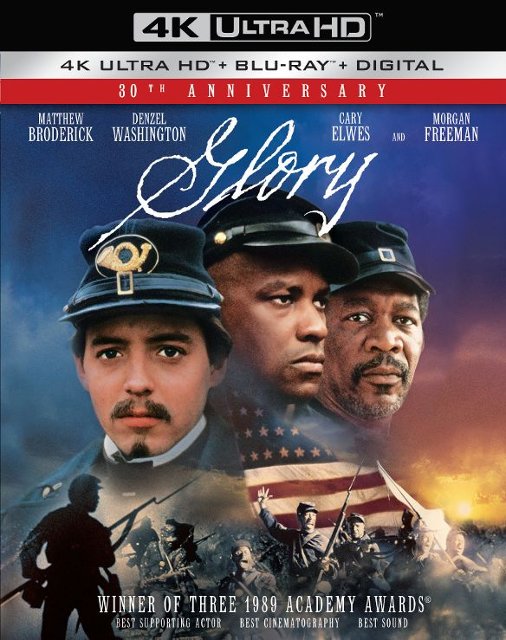