Forum List What's new Dark Style Change width
Log in Register
What's new Search
Menu
Log in
Register
Navigation
Install the app
More options
Dark Style
Close Menu
Posted on August 26, 2016 by Matt Hough
You are using an out of date browser. It may not display this or other websites correctly.
You should upgrade or use an alternative browser.
Beautiful looking if mediocre romantic action western 3.5 Stars

Arnold Laven’s The Glory Guys combines a slice-of-life look at post-Civil War cavalry duty with a fictional preparation for what would turn out to be Custer’s Last Stand.

Arnold Laven’s The Glory Guys combines a slice-of-life look at post-Civil War cavalry duty with a fictional preparation for what would turn out to be Custer’s Last Stand. All told, it’s neither soup nor nuts in terms of its narrative thrust, and there are plenty of cardboard characters and storytelling clichés on display, but it does look beautiful throughout with a host of familiar Hollywood faces in the mix, and the great cinematographer James Wong Howe comes to the fore in offering painterly, poetic images of the Old West in between the rather standard action and romance in the offing.

Captain Demas Harrod (Tom Tryon) once again finds himself under the command of the vainglorious General Frederick McCabe (Andrew Duggan) who thinks nothing of sending a platoon of men acting as decoys out to slaughter while his large army can close in and gain victory against the Sioux. Harrod’s company which he is tasked to train is composed as usual of misfits and ne’er-do-wells but with the help of Sergeant James Gregory (Slim Pickens), he eventually gets his men ready to engage in the Sioux Wars. Meanwhile, Harrod also has his hands full with his former love Lou Woodard (Senta Berger) who is also being courted by army scout Sol Rogers (Harve Presnell). To keep his mind on his work, Harrod bows out of the love triangle, but that doesn’t stop the widow Woodard from coming around at every opportunity to cause him no end of angst.

The film’s greatest claim to fame apart from its multi-award-winning cinematographer is likely its screenwriter: Sam Peckinpah who penned his script based on Hoffman Birney’s novel The Dice of God. Most of the characters in the mix are cardboard clichés: stalwart hero, glory-mad commanding officer, happy-go-lucky Irishman, gritty sergeant with a heart of gold, beautiful widow torn between two loves, innocent youngster emotionally ill-equipped for fighting, and nothing particularly innovative has been done with these people. In fact, several of the character arcs aren’t even carried forward to fruition, their fates left to our own imaginations. Instead, we’re treated to several extended fight sequences with lots of property destruction: Harrod and Rogers trading roundhouse punches on first meeting, a free-for-all bar fight, a faux Indian attack as a means of training the raw recruits. But in the film’s last quarter, we do get its unquestionably most important sequence: the showdown between the embattled decoy regiment used to draw the enemy fire and the rampaging Sioux. Director Arnold Laven sustains the battle over a very long amount of time with realistic ebbs and flows in the attack as one side or the other gains advantage and the outcome always unclear as to the survivors (it may surprise some that the Little Big Horn aspect of the battle is never shown, only its shockingly decimated aftermath). Cinematographer James Wong Howe offers wonderfully composed images throughout, from an astonishing shot of silhouetted cavalry against the early morning sky to a wonderfully photographed moment where the full army snakes back across the plain. The color and Panavision turn out to be wise choices in giving this otherwise mediocre cavalry western more than enough reason for existing.

Tom Tryon cuts a handsome figure on screen, but like John Gavin and other handsome leading men of the period, there’s little inner fire and their personalities are rather muted. Harve Presnell with his perfectly coiffed hair and beautifully cleaned and pressed clothes seems a far cry from the usual scout of the era (think of Henry’s Fonda’s scraggly appearance as the scout in How the West Was Won for contrast). Both men, however, get their licks in with romantic scenes with the beautiful but underused Senta Berger and later in the combat scenes where they put their romantic rivalry aside and work together to try to survive. Slim Pickens is reliably crusty and lovable, and Andrew Duggan to his credit doesn’t play General McCabe as completely bonkers but instead as simply mad for glory and supercilious. James Caan plays the genial Irishman with an accent that occasionally takes side trips to the Bronx. Peter Breck is the cocky lieutenant always on the Irishman’s case, and Michael Anderson, Jr. plays the innocent Private Martin Hale who ran away from a shotgun wedding and now wishes to be out of the military. Jeanne Cooper has a couple of scenes as the haughty wife of General McCabe, and Wayne Rogers pops in and out as Harrod’s friend Lieutenant Mike Moran.

The film’s Panavision 2.35:1 theatrical aspect ratio is faithfully delivered in 1080p using the AVC codec. This is one of the better MGM transfers that Twilight Time has presented. Sharpness is excellent with lots of detail in hair, clothes, and facial features while color is very saturated with occasionally hot skin tones which appear a tad unnatural. Contrast gets a consistent application, and black levels are surprisingly rich. And, unlike so many of the MGM HD transfers, this one has almost no dust and dirt traces making for a very captivating picture. The movie has been divided into 24 chapters.

The DTS-HD Master Audio 2.0 mono sound mix is typically unremarkable for a medium-budget movie of the period. Dialogue is sometimes a bit clipped in the mix, and in the title song there’s a bit of distortion present in the upper reaches of the soundtrack. Riz Ortolani’s music is serviceable and is combined with surety with the sound effects for the movie. Age-related problems with hiss and crackle have been eliminated.

Audio Commentary: producer Nick Redman and film historians Paul Seydor and Garner Simmons, all Sam Peckinpah enthusiasts, provide a somewhat ordinary commentary since they have little respect for the film (Nick Redman seems more willing to give it the benefit of the doubt than the others), they speak more about Sam Peckinpah’s career than about the film itself (they haven’t even researched it enough to identify some of the major featured players).

The James Wong Howe Story (8:23, HD): narrated by Tom Tryon, this promo for the upcoming The Glory Guys focuses on the cinematographer who that day was shooting the climactic battle scene.

Promoting The Glory Guys (3:34, HD): a montage of lobby cards, stills, and posters from around the world used to publicize the movie.

Art Gallery: many of the dozens of materials used in the montage above are available for viewing singly.

Six-Page Booklet: some color and black and white stills, original poster art on the back cover, and film historian Julie Kirgo’s altruistic examination of the movie.

It’s not a great film, but it’s a highly watchable one; The Glory Guys offers a beautiful looking high definition transfer and a truckful of famous Hollywood faces at various points in their careers. There are only 3,000 copies of this Blu-ray available. Those interested in purchasing it should go to either www.twilighttimemovies.com or www.screenarchives.com to see if product is still in stock. Information about the movie can also be found via Facebook at www.facebook.com/twilighttimemovies.

I remember very little of this film but I'm going to buy the disc. I'm disappointed that the commentary is less that we have become used to with Twilight Time discs, but the other "extras" are interesting. I assume the Senta Berger interview has subtitles?

Robin9 said:
I remember very little of this film but I'm going to buy the disc. I'm disappointed that the commentary is less that we have become used to with Twilight Time discs, but the other "extras" are interesting. I assume the Senta Berger interview has subtitles?
Click to expand...

I finally tried the commentary this evening. I lasted about 20 minutes before dozing off. Talk about yawnsville! I know these people are Peckinpah fanatics but didn't it occur to them to discuss the film? All they seemed to want to do was parade their knowledge about Mr. Peckinpah's career.
You must log in or register to reply here. 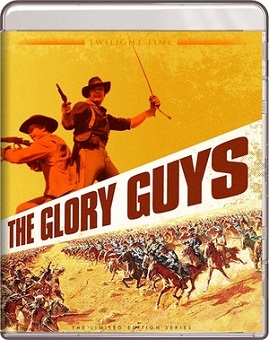