Posted on April 16, 2019 by Todd Erwin
Disappointing conclusion to the trilogy 4 Stars

M. Night Shyamalan brings his Unbreakable trilogy to an end with Glass, a movie that, unfortunately, does not deliver on its promises.

M. Night Shyamalan’s surprise shock ending to Split wasn’t that James McAvoy’s multiple personality serial killer Kevin escaped, it was that it was part of the Unbreakable universe he began back in the year 2000, setting up that David Dunn (Bruce Willis) was probably going to track down Kevin in the next installment. Audiences may have feared and wondered if it would be another sixteen years to see that showdown, but Split was a surprise success, and both Universal and Blumhouse wanted to cash in with a sequel as soon as possible. With Glass, the wait was less than three years, but was it worth it?

David Dunn has moved on from being a security guard at the university athletic field, now running a security electronics store with his son, Joseph (Spencer Treat Clark), during the day while the two fight crime at night (David taking down the perps while Joseph relays info such as police activity). One day, while on a walk in the warehouse district, David sees a young man (James McAvoy) acting childish who brushes up against him while walking by. This triggers a vsision for David, and he sees not only the four missing cheerleaders that has been reported on the news, but there location as well. As David attempts to rescue the girls, The Beast (McAvoy) arrives, leading to a foot chase through city streets, until both are cornered by police and psychologist Dr. Ellie Staple (Sarah Paulson). The two are captured and sent to Raven Hill Memorial Mental Hospital for observation under Dr. Staple’s care. Dr. Staple believes that there is no such thing as a “super human” and that it can all be simply explained away and cured by a laser surgery technique on the frontal lobe of the brain she invented. Also under her care and under heavy sedation for the last eighteen years is Elijah Price (Samuel L. Jackson), aka Mr. Glass, who was responsible for the train crash in Unbreakable, as well as many other mass fatality incidents. Or has he? Glass is more talk than action, bringing back many characters from the previous two films, most notably Casey Cooke (Anya Taylor-Joy) known as the one The Beast let get away who turns out to be the beauty that tames this Beast. Also back (in heavy age make-up) is Charlayne Woodard as Elijah’s mother. The latter half of Glass has Elijah essentially playing chess with the hospital staff as well as David and Kevin, giving the audience the assumption that a final showdown is about to take place in downtown Philadelphia at the grand opening of a state of the art office skyscraper, pitting The Beast against David. SPOILER ALERT: This is where Glass shatters that assumption with its audience, instead leading to a confrontation between the three on the grounds of the hospital, and one that really isn’t all that exciting. While it is somewhat understandable that with the budget allotted to Glass likely wasn’t going to allow that showdown, it’s a big letdown for the audience since writer-director Shyamalan constantly builds towards that ending, then falls extremely short of that buildup. Both Unbreakable and Split are very much self-contained movies with the ability to stand on their own without seeing the other (although the surprise ending of Split requires knowledge of Unbreakable, it is not an imperative part of the plot). Glass really requires the viewer to have seen the two previous films to understand the characters more fully, and this reviewer did have to stop Glass fifteen minutes in to go back and screen the first two entries before continuing on.

Glass isn’t a bad movie, it’s just a disappointment due to both its hype and buildup to an ending that does not payoff.

Have I mentioned how great Universal’s Blu-ray releases have been lately? Glass continues that trend with its very film-like 1080p AVC-encoded transfer that presents the film in its theatrical aspect ratio of 2.39:1. Glass was captured at 3.4K resolution on Arri Alexa Mini and SXT cameras, then completed as a 4K digital intermediate. Colors are natural and well-saturated, with no banding or blooming issues. Detail is excellent, providing intimate facial features and fabric textures. Contrast is a bit tricky, as this is a fairly dark film, and at times shadow details can get lost in those darker sequences.

The Blu-ray edition of Glass contains the same Dolby Atmos mix found on the 4K UHD Blu-ray release. I found the use of heights to be more subtle than expected in a film like this one, utilizing them more for atmospheric effects and helping to pinpoint sounds more precisely. Dialogue is clear and understandable throughout, and LFE is excellent, giving the low hums of the equipment at the hospital a deeper low end.

There is a good wealth of material here, sure to please fans of the trilogy.

Alternate Opening (1080p; 2:57): Writer/Director M. Night Shyamalan introduces the original opening title sequence and why it wasn’t used (although most of the shots did find their way into the completed picture).

The Collection of Main Characters (1080p; 8:42): As the title suggests, a look at the film’s main characters – David Dunn, Elijah Price, Kevin Wendell Crumb, and The Rest of the Family.

Bringing the Team Back Together (1080p; 2:54): The cast and crew discuss returning to the Unbreakable universe.

Breaking “Glass:” The Stunts (1080p; 1:28): Stunt coordinator Manny Silverio discusses many of the action sequences in the film with help from other members of the cast and crew.

Night Vision (1080p; 1:56): A look at how much the director relies on story boards to bring his vision to the screen.

DVD Copy: The movie in 480p and Dolby Digital 5.1 audio plus Alternate Opening, Deleted Scenes and A Conversation with James McAvoy and M. Night Shyamalan.

Glass was a bit over-hyped as the thrilling conclusion to the Unbreakable trilogy, a buildup that the film fails to really deliver on. Universal’s Blu-ray presentation is very good, although if you are 4K capable that is the better choice. 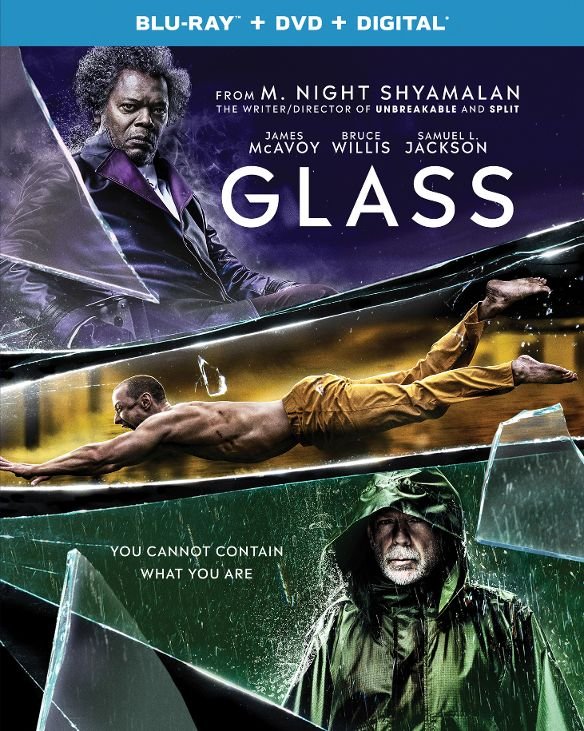