Engrossing mystery with perhaps a too neat conclusion. 3.5 Stars

Whether on UHD or standard Blu-ray, The Girl on the Train successfully brings another cracking mystery thriller to the screen filled with outstanding performances, smooth direction, and an exemplary production.

Three unstable and to various degrees unhappy women form the nucleus to the murder mystery inherent in Tate Taylor’s The Girl on the Train. Presenting three superb roles for talented actresses and a fetching production that feels uncommonly real, the movie offers an unsettling but irresistible conundrum which ably shifts the spotlight of guilt onto any one of several main characters until secrets are finally revealed and all of the layers of the onion-skinned plot have been peeled away with only one unassailable killer. The UHD release of the film offers the same outstanding soundtrack encode found on the Blu-ray disc with additional clarity offered by the higher resolution and judicious use of HDR to bring out skin highlights and increase black levels.

Desperately unhappy and unstable public relations rep Rachel (Emily Blunt) passes by her old neighborhood twice every day on her way to and from Manhattan. Here she sees a very happy couple enjoying what appears to be a satisfying marriage, people whom she later identifies as Megan (Haley Bennett) and Scott (Luke Evans). Meanwhile their neighbors are her ex-husband Tom (Justin Theroux) with the woman he left her for, Anna (Rebecca Ferguson), complete with their newborn daughter, something Rachel was never able to give Tom and one of the reasons, along with her growing need for alcohol to dull her sense of guilt and shame, why their marriage went south. One afternoon, Rachel notices Megan on her balcony kissing another man, her psychoanalyst Dr. Kamal Abdic (Edgar Ramírez) and shortly thereafter, Megan goes missing. When her body is found, suspicion falls naturally on Megan’s husband Scott, but after Rachel reports what she had seen to Detective Riley (Allison Janney), it soon becomes known that Rachel herself had left the train before Megan’s disappearance and confronted Megan about her unfaithfulness. Her drunken presence in the neighborhood had also terrified Anna who had had previous discordant run-ins with the unstable Rachel, and with Tom’s complaints to the police about Rachel, she becomes a chief suspect in the death of Megan.

Erin Cressida Wilson has adapted the best seller by Paula Hawkins, but while the three main female characters remain, the multiple points of view as narrated by the women have been streamlined into Rachel’s being the primary narrator with occasional first person sequences with both Anna and Megan. What also remains from the book is the unreliability of the Rachel narration. The fact that Rachel is a full blown alcoholic suffering from blackouts where her memory is foggy at best obscures for a good portion of the story what’s actually occurring on this idyllic street where Rachel is no longer welcome. But the script quite cleverly does expand the list of viable suspects to almost every main character until finally, in a protracted and somewhat talky climax, the murderer’s real identity is revealed, and we get a flashback to the actual killing. Tate Taylor directs smoothly, sometimes focusing on mirror images of a certain character allowing us to make the connection that these three women are in certain respects and at certain key moments mirror images of one another and filming Rachel’s important confrontation with Megan with its blackouts slowly but surely replaced as the film runs by snippets of what else of great importance transpired. Manhattan locations (Grand Central Station is always a wonderful site for filming) and the surrounding Ardsley-on-Hudson suburb make stupendous sites for characters to interact, and even apart from the delicious mystery unspooling, it’s simply a pleasure to watch as the handsome scenery along the Hudson River passes by.

It’s another star-making performance for Emily Blunt who seizes the opportunity of playing the broken, drunken Rachel and runs with it. She’s stunning throughout, never worrying about how dreadful she looks or how slurry her speech is in creating this sometimes pitiful, sometimes enraging woman. Haley Bennett and Rebecca Ferguson likewise make their opportunities playing the unstable Megan and Anna respectively count, the former with less screen time but a more interesting character and the latter with a character we’d like to know more about. The men of the piece have also been cast felicitously: Justin Theroux makes a great Tom, eager to please his wife without upsetting the happiness of their home with their new baby, Luke Evans is excellent as the baffled Scott who had no idea of Megan’s life being in danger, and Edgar Ramírez is effective as the concerned Dr. Abdic whose bedside manner is perhaps a little too accommodating. Allison Janney brings her usual no nonsense approach to Detective Riley to good effect, and Lisa Kudrow as a socialite wife holds some key pieces of the puzzle without realizing it has a couple of snappy scenes. Laura Prepon as Rachel’s friend and roommate Cathy and Darren Goldstein as a man on the train who appears at key moments also do well in their smaller roles.

The film’s original theatrical 1.85:1 aspect ratio is brought to this transfer in 2160p resolution using the HEVC codec. The extra resolution from the upconverted 2K files in 4K allows us to study even more effectively the facial features (freckles, blotches, bruises, cracked lips) of the characters while hair and clothes textures take on added dimension with the sensible application of HDR throughout. There are still occasional scenes where contrast seems a bit off or sharpness lags a bit (this doesn’t include the many flashbacks where a drunken Rachel goes in and out of consciousness), but light highlights are especially pleasing in this encode. The movie has been divided into 16 chapters.

The sound encode on the UHD release is the same one found on the Blu-ray release. The film’s sound design is represented on the disc with DTS:X (decoded by my equipment as DTS-HD Master Audio 7.1). The film, however, doesn’t really make full use of such an elaborate sound design with the surround channels doing splendidly with Danny Elfman’s background score. Atmospheric effects can have some very good dynamics here, but dialogue is rooted to the center channel, something that might have been used with a bit more imagination with voices drifting in and out of Rachel’s consciousness as she veers in and out of sobriety.

The UHD disc contains one bonus feature, the audio commentary track which is also found on the enclosed Blu-ray disc. That disc contains the following features:

Audio Commentary: director Tate Taylor shares a good-natured track of reminiscences as he watches the film, filled with praise for all his collaborators but becoming spottier the longer the film runs.

Deleted/Extended Scenes (17:38, HD): fourteen scenes may be watched separately or in montage.

The Women Behind The Girl (5:04, HD): original author Paula Hawkins and screenwriter Erin Cressida Wilson discuss the original story and its adaptation for the movies, spelled by comments from producer Mark Platt and director Tate Taylor.

Blu-ray/Digital Copy/Ultraviolet: disc and code sheet enclosed in the case.

Whether on UHD or standard Blu-ray, The Girl on the Train successfully brings another cracking mystery thriller to the screen filled with outstanding performances, smooth direction, and an exemplary production. Those who haven’t already read the book will likely be kept guessing until the mystery’s solution is revealed, and there’s a satisfying resolution to the crime even if things get tied up perhaps a bit too neatly.

Thanks for the always excellent review Matt. I read the book and figured out the culprit only one third in. Very disappointing. I was hoping I was wrong.
Reactions: Matt Hough

JoelA said:
Thanks for the always excellent review Matt. I read the book and figured out the culprit only one third in. Very disappointing. I was hoping I was wrong.
Click to expand...

I hadn't read the book, so I was completely fooled and quite surprised when the twist finally came.

Matt Hough said:
I hadn't read the book, so I was completely fooled and quite surprised when the twist finally came.
Click to expand...

I never read the book and I was so bored by the movie that I've already forgotten who did it!
Reactions: JoelA

Matt Hough said:
I hadn't read the book, so I was completely fooled and quite surprised when the twist finally came.
Click to expand... 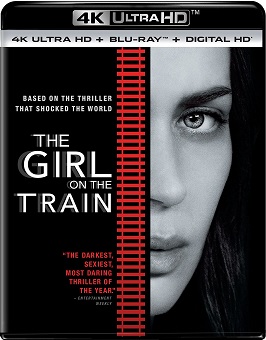