Posted on February 11, 2016 by Matt Hough
A classic gets some classy treatment 4 Stars

One of the most enigmatic love triangles in the history of movies can be found in Charles Vidor’s Gilda.

One of the most enigmatic love triangles in the history of movies can be found in Charles Vidor’s Gilda. Unconventional from start almost to finish (with a most conventional and implausible denouement that seems so false compared to all that has gone before), Gilda is quintessential Hollywood filmmaking with alluring stars, an exotic foreign locale, and a noirish spin to the storytelling that keeps things off balance and unsteady throughout. Seventy years after its theatrical premiere, the movie still casts its own particular and peculiar kind of spell.

Saved from an attack on a Buenos Aires dock, Johnny Farrell (Glenn Ford) goes to work for the man who saved him, a shady entrepreneur named Ballin Mundson (George Macready). The two men are devoted to one another until Ballin returns from a business trip with a new wife, a red-headed bombshell named Gilda (Rita Hayworth) with whom he’s besotted. Johnny and Gilda obviously dislike one another on sight, but it gradually becomes clear that they had had an affair some time ago that ended badly, and now Gilda plans on making Johnny’s life miserable by having dalliances with every attractive man she can get her hands on knowing that Mundson expects him, among his other duties, to keep her away from other attractive men. But what games are Mundson and Gilda playing? He’s obviously got some unscrupulous deals in the works, and is Gilda merely trying to make Johnny jealous to either win him back or cause him grief at letting her go, or does she have more ulterior motives with her late-night activities?

With the Hollywood Production Code operating in full force, the real nature of Mundson and Farrell’s relationship can only be surmised in subtext from the screenplay by Marion Parsonnet, but it seems fairly obvious after several viewings that the two men have an unusual attraction that only Gilda, the one woman either of them shows any interest in at all, can deflect. Johnny fights any sparks between him and Gilda until the sexual tension is thick enough to slice with a knife while always thinking of Ballin’s feelings and welfare and even after it appears he’s dead keeping Gilda a prisoner without affording her any of the pleasures of conventional marriage. But the focus of the film is not the shady and powerful neo-Nazi cartel corporation that Mundson seems to control, but the guilt trips and hedged innuendos Johnny and Gilda fire back and forth in each other’s direction and making one another alternately miserable and triumphantly if momentarily in control. Director Charles Vidor allows Rita Hayworth to make one of the most spectacular star entrances in any film, popping up into frame with her lion’s mane of red hair flipping backward filling the screen and from there proceeding to present her in an alluring series of stunning Jean Louis gowns while dancing and crooning two songs written for the film which Hayworth’s distinctive voice double Anita Ellis sings memorably: “Amado Mio” and (most famously) “Put the Blame on Mame” (performed twice, once with simple guitar accompaniment and later in a full nightclub setting with orchestra). But despite the movie title and Hayworth’s stunning presentation, Glenn Ford really seems the focal point of the movie. He’s the narrator, and it’s his journey through a bisexual relationship with a powerful man while maintaining a poisonous, hated-tinged confusing relationship with his new wife (and Johnny’s ex-lover) that drives all of the film’s action.

Gilda afforded Glenn Ford his biggest role yet in the movies (he began making them in 1939), but it’s one of the least conventional leading male roles he would ever play. He allows himself to enjoy being the number one man to the boss, his delight playing across his face at regular intervals in the early going and later his contempt and aggravated sense of loss, love, and hate manifesting themselves clearly in his features and body language as the film progresses. Rita Hayworth certainly basks in the limelight of such a showy role even if both she and Ford are double-crossed by the script’s terrible last minute turnaround in their personalities becoming almost angelic in the film’s final moments negating much of the strong, seared personalities we had gotten to know and be intrigued by during the film’s preceding one hundred minutes. George Macready gives a very still and internalized performance holding back enough to make him an almost unsolvable enigma for the audience. Joseph Calleia offers a strong performance as Detective Maurice Obregon, serving more as the conscience for goodness in the film and underplaying beautifully throughout. Steven Geray manifests an amenable presence as the club’s judgy custodian Uncle Pio.

The film’s original theatrical 1.33:1 aspect ratio is faithfully presented in this 1080p transfer using the AVC codec. Sharpness is dazzling in the presentation, and the grayscale offers beautifully realized black levels and whites that are clean and crisp. Apart from a couple of faint digital fingerprints left behind in restoring the film to its former glory, the image is clean as a whistle and very beguiling to view. The movie has been divided into 23 chapters.

The PCM 1.0 (1.1 Mbps) sound mix offers era-appropriate sound design that presents the dialogue, the background score by Morris Stoloff, and the sound effects in perfect balance in the mono track. Any age-related problems with hiss or crackle have been handled with almost perfect results.

Audio Commentary: critic Richard Schickel offers another of his mediocre appraisals of films from the era. He seems to be a fan of the movie, but his research is nil as scores of character actors pass by without a word of comment on their careers while he focuses on generalities about the stars, the director, a few other key personnel, and some of the film’s themes. There are plenty of silent gaps also in this commentary.

Martin Scorsese/Baz Luhrmann Interviews (16:06, HD): both directors offer opinions (separately) about the movie. Luhrmann in particular makes some salient comparisons to his Moulin Rouge! and expresses real admiration for this period of big studio moviemaking.

Hollywood and the Stars (25:11, HD): a 1964 episode of the television series narrated by Joseph Cotton which focuses on the career of Rita Hayworth with brief clips from her films (not identified) and the star herself offering up opinions of her work and her future (she had just completed filming Circus World).

Eddie Muller Interview (22:13, HD): the disc’s best bonus feature is this critical analysis of the movie in which the film historian examines the central relationship between the two men and how the character of Gilda figures into the turmoil.

Enclosed Pamphlet: contains a brief cast and crew list, information on the video and audio transfer, and film critic Sheila O’Malley’s trenchant analysis of the movie and an overview of Rita Hayworth’s career.

Another Hollywood classic, this time Gilda, comes to Blu-ray in an exquisite Blu-ray presentation with the film looking and sounding as striking as it must have been at its premiere seventy years ago. The bonus features vary a bit in quality, but the best ones make the set well worth having. Recommended! 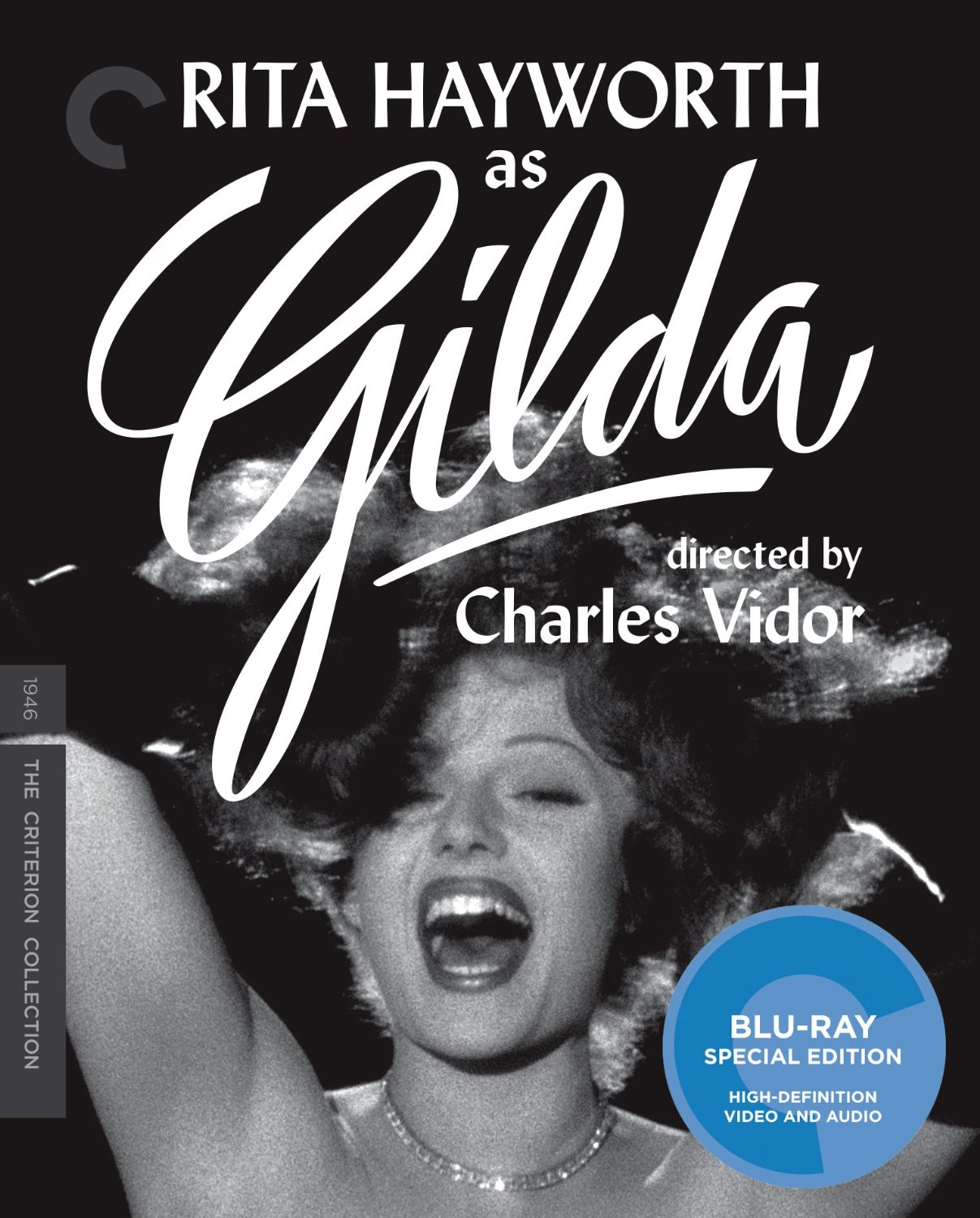