The summer of 1984 was a great time to go to the movies. Harrison Ford donned the fedora a second time in Indiana Jones and the Temple of Doom, Joe Dante brought his mischievous blend of horror and comedy with Gremlins, but the box office champ that summer was Ivan Reitman’s Ghostbusters, a movie that had ingrained itself into pop culture almost immediately upon release, with friends quoting line after line all summer long.

Something supernatural is afoot in New York City, with hauntings on the rise, and three parapsychologists (Bill Murray, Dan Aykroyd, and Harold Ramis) find a way to trap and incarcerate ghosts, forming the Ghostbusters. Cellist Dana Barrett (Sigourney Weaver) enlists the ghost exterminators when eggs begin to pop out of their carton and fry on her countertop, and a portal appears in her refrigerator inhabited by a terror dog. Peter Venkman (Murray) is sent to investigate, finding very little evidence of any paranormal activity, but becomes smitten with Dana, agreeing to solve her problem. With their business booming, the Ghostbusters are quickly shut down by Walter Peck (William Atherton) from the EPA for illegal disposal of hazardous waste, and thus releasing all of the captured ghosts to run free in New York City. This all leads to the film’s climax, as they soon discover that Dana Barrett is living in a building that is a gateway to the demigod Gozer the Gozerian, who is bent on destroying the world. Dana and her neighbor Louis Tully (Rick Moranis) are the lock and key, quite literally, to freeing Gozer, and it is up to the Ghostbusters to save the city (and the world) from being erased from existence.

In the summer of 1984, I was one of three visual effects supervisors on a student-produced science fiction epic called Odyssey Through Time as part of Cinekyd’s summer program. What I remember most from that summer was the crew, especially my two colleagues George Gakoumis, Jr. and Eric Kurland, quoting many of the best lines from Ghostbusters as part of their normal dialogue with each other within days of its initial release. Credit has to go to the film’s writers Dan Aykroyd and Harold Ramis (who also played Raymond Stantz – the heart of the Ghostbusters; and Egon Spengler – the brains, respectively) as well as the improvisational talents they shared with Bill Murray. Ivan Reitman was one of the top comedic directors in Hollywood in the 1980s and early 1990s, having made Meatballs and Stripes (both with Murray and Ramis), Twins, Dave, and Kindergarten Cop. But none of those films matched the success of Ghostbusters, not even the 1989 sequel. Sigourney Weaver showed her knack for comedy, standing toe to toe with Murray and actually helping draw out one of his best comedic performances. Rick Moranis is perfectly cast as the geekish accountant Louis Tully who has a habit of locking himself out of his apartment. Ernie Hudson is sorely underused as the hired hand brought in as a script device to help explain the paranormal science for the audience. Richard Edlund’s visual effects hold up for the most part, but at times look a bit cheesy by today’s standards. Overall, Ghostbusters is a film that is practically timeless, as fresh today as it was over 30 years ago.

Ghostbusters is a film that was completed back in the days when visual effects were completed optically, a product of a very analog world, where the only thing a computer could do was record and playback a camera movement. For this 4k UHD release, Sony has gone back to an actual film source, scanned the print at 4k resolution, and retimed the color and lighting using HDR. The result is one of the most organic-looking discs released in the format thus far. Many will likely enjoy it, some will probably hate it. This is not the sharp, sterile style of transfer like Deadpool or The Revenant (both taken from 4k masters), as those were both captured digitally during principal photography. Ghostbusters was photographed by the late Laszlo Kovacs in 35mm and 65mm (for effects shots), using a very fast film stock that results in a rather grainy image. Non-cinephiles may be bothered with the inherent film grain, but I never found it distracting. It actually reminded me of how it looked when I saw the film theatrically back in 1984. Colors are natural and consistent, flesh tones are perfect, and contrast is excellent, providing very fine black level detail throughout most of the film (that’s not crush you are seeing – it’s film grain). If this is how classic films are likely to appear on the format, I’m all in!

As part of Sony’s audio policy regarding 4k UHD discs, Ghostbusters has been remixed in Dolby Atmos, and is backwards compatible to Dolby TrueHD 7.1. Folded down to 5.1 in my home theater space, the film sounded exceptionally well. Dialogue was clear and understandable, never getting lost in the mix. Elmer Bernstein’s score and the many pop songs used throughout fill the room nicely, utilizing all available channels, including LFE for nice bass response. Sound effects are also used discretely, never sounding gimmicky as some multichannel remixes from matrixed surround masters sometimes do. Ghostbusters has never sounded better.

This is my first experience with a 4k UHD disc from Sony, and their menu design takes some getting used to. While the other studios are using the exact same menu design they use on their Blu-ray (which is sometimes confusing when you’re not sure which disc is in the player), Sony has decided to go with something entirely new, where the viewer has to follow the arrows to get to the options screen they want to arrive at.

If Ghostbusters represents how classic films will appear on the UHD disc format, then this is truly something to be excited about. Extras on the UHD disc are slim, but at least Sony included the audio commentary so one can watch in 4k and listen to this classic track. Most of the bonus features from the various home video formats are included on the Blu-ray, so that’s a nice plus. 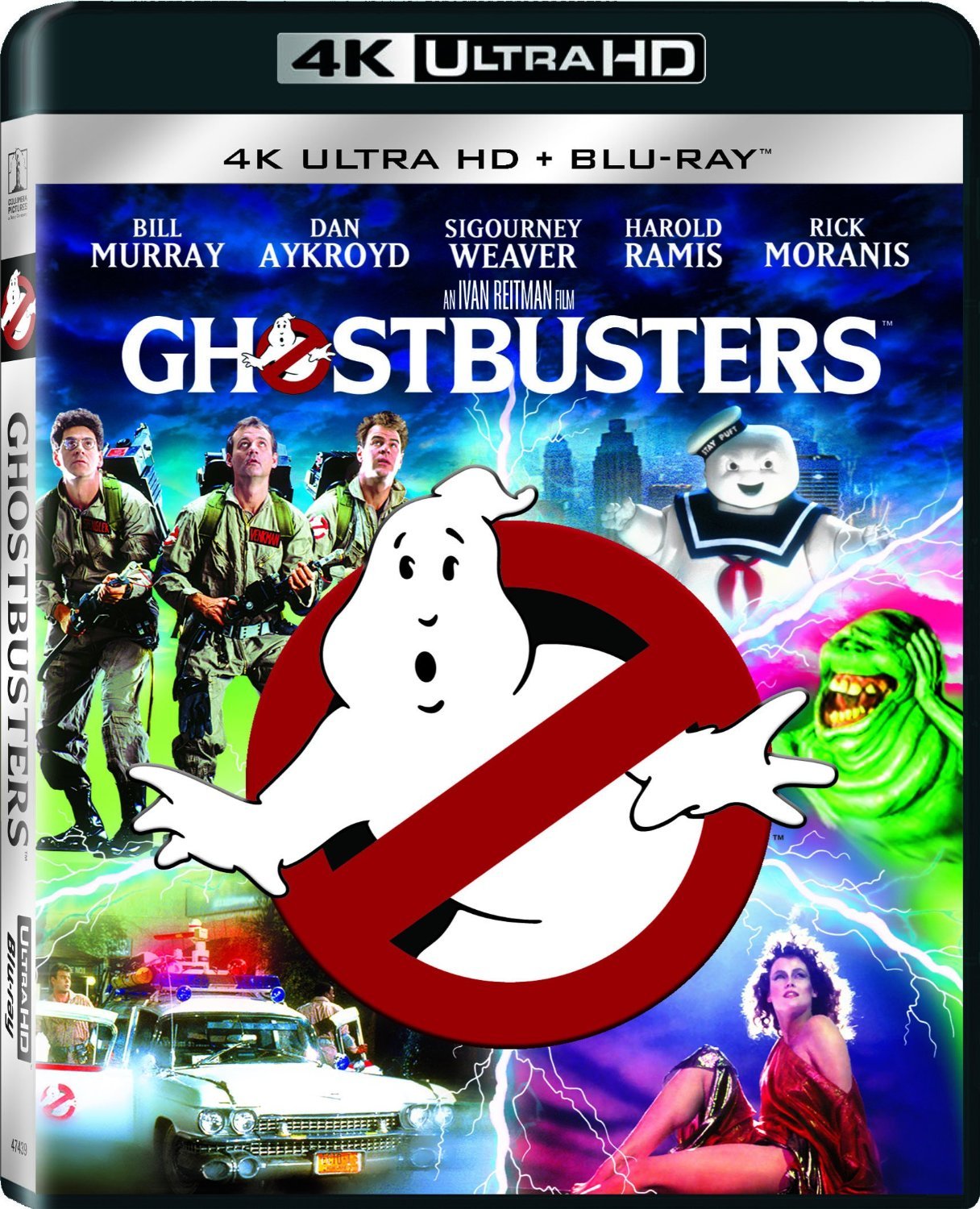