Ghost in the Shell is an ambitious, stylized, visually impressive film with a good cast. While it may not have satisfactorily explored the moral questions of who we are and what makes us human, it makes a genuinely earnest attempt at probing something deeper than just a plot around which action set-pieces are formed. The film received considerable backlash for casting a white actress in the lead–a role (from a Japanese manga series, set in Japan of the future.) That issue is quite real and while reactions to the casting by Asians and Asian-Americans vary from shrugs or enthusiastic embrace, to cries of whitewashing and reminders that Hollywood has a minority and people of color-representation problem, the issue hurt the box office potential of the film. Judged outside the controversy, Ghost in the Shell is a good motion picture with a terrific central performance and a flurry of technical excellence. The controversy, however, casts quite a shadow.

“They created me. But they cannot control me.”

It is the future and people have become comfortable enhancing themselves with technology, blurring the line between humanity and technology. In this world, Major Motoko Kusanagi (Scarlett Johansson) is the first of her kind, a human saved following a tragedy and merged with cyber enhancements to become a perfect soldier. As cyber terrorism increases, where humans can be hacked and controlled, Major and the others in her unit, Section 9, along with her partner Batou (Pilou Asbæk), and under the leadership of Aramaki (Takeshi Kitano) fight to bring down the terrorists, but Major discovers that all is not as it appears, and begins to question everything about who, and what, she really is.

Ghost in the Shell is an ambitious and was, frankly, a risky proposition for Paramount. Certainly, a favored property to those familiar, but not as well-known outside the targeted audiences for manga and anime. The subject and storyline are also deep and bleak where the boundaries of humanity have slipped and shifted (allowing for the central question at the heart of Ghost), and our hero is at once a conflicted ‘construct’, and also the most ‘human’ of all the characters we meet in this world.

The success of Ghost in the Shell as a major motion picture would be predicated on a compelling adaptation of the source material, acceptance of the adaptation from those familiar with it, and interest and excitement from those who were unaware of the story. On those three grounds, Rupert Sanders’ cinematic adaptation comes close, but has too much working against it. On the first, the faithful adaptation of the source aesthetic using complex and detailed visual effects work, costume, set-design, and practical effects, seemed to boost interest and favor, but on the second, acceptance of the adaptation, any goodwill conjured from the aesthetic and design mastery would be knocked by the casting of the vital Major character by a non-Asian actress; a controversy the film would not escape or assuage. Finally, enticing or persuading those unfamiliar that this was a story and a world to invest in would, it seems, be irrevocably harmed by the casting controversy as well. So let’s talk about that controversy.

There have been many terrific examinations of the controversy and the complicated and long fermenting reasons of why the casting choice here mattered so specifically (covering everything from cultural appropriation and sidelining born from America’s victory over Japan in World War II, to the rise and fall of Japan’s electronics-based economy that fed the story in the first place). In one particularly insightful piece, published on The Verge, the complicated matter of ‘representation’ as viewed by people in Japan versus Japanese-Americans (where those in Japan were largely thrilled at Scarlett’s casting, and Asian-American’s were largely disappointed and angry) was discussed. The director of the 1995 Anime version of Ghost in the Shell publicly supported Scarlett’s casting, but that didn’t seem to dampen the anger. The casting of Scarlett Johansson, who is striking in the role, came on the heels of a heightened awareness of ‘whitewashing’, everything from the proliferation of white actors in Alex Proyas’ Gods of Egypt, to Emma Stone’s casting in Aloha, to Tilda Swinton in Doctor Strange, and others, the matter of white actors taking roles and characters that either historically were Asian, or were understood to be Asian in the source material, highlighted the blatant bias against casting minorities. Add to that the appalling lack of Asian roles in film and television (and the appalling lack of people of color, or the persistent lack of opportunities for minorities and women to have better quality roles), and you have an issue that demanded to addressed. The timing of Ghost in the Shell, and the complicated reason behind why the character of Major in Ghost in the Shell should (and for some, doesn’t have to be) Asian, conspired to be a thorn that could not be overcome.

Outside the controversy, how was Scarlett Johansson’s Major? In a word, magnificent. It would be easier if she were terrible, but she frankly reminds us of just how skilled and capable an actor she is. Portraying a human/machine hybrid, she walks with a strange gate, has none of the natural ticks or twitches humans display unconsciously, she cannot relax in a moment, be human the way others are, because she is something else, other, different. And Scarlett captures the restraint and core humanity of her character with an effortlessness only possible of a performer working hard to achieve that. She is magnetic, strong, vulnerable, and capable, with a captivating beauty and hint of wit. As we have seen of her as Black Widow in the Marvel universe, she has the physicality of fight-sequences down to a fine art, but in the quieter moments, little conversations here and there, her character’s contemplations become the draw into the film and what the film wants to examine. While the script doesn’t always allow that examination to take root in the way we might want-the challenge I suppose of feeding the action-movie spectacle and corresponding big-budget demands-it does at least begin to engage these contemplations. A sequel, I suppose, would have given us a better opportunity to explore the deeper questions at play.

Tonally, this 2017 film fits with the 1995 adaptation, and exalts a marvelously detailed visual-effects rendered future that will reward repeated viewings. The subject is brooding, and the state of the world, with its blurred line between technology and humanity (something that the world has been stridently moving toward since the story was first published), is a bleak indictment on lost humanity. But the world they have created is also punctuated with a beautiful neon brightness, artifice for sure, but stunning nonetheless.

Director Rupert Sanders, who demonstrated a sure feature-film directorial hand with the rather good Snow White and the Huntsman, continues to show that confident hand here. Working with cinematographer Jess Hall, Sanders creates a striking vision of the future, visual abundance and, taking cues from the original material (and the 1995 adaptation) as inspiration, some wonderful images. He also captures some great performances; Takeshi Kitano’s Aramaki, Michael Pitt’s (under-used) Kuze, Juliette Binoche’s Dr. Oulet, and Pilou Asbæk’s Batou primary among them. They each fully embrace the world and their characters role in it, but it is Scarlett Johansson’s Major that mark the center of this film’s story, universe, and reason for checking the film out.

A technically excellent presentation of this film in High-Definition, Ghost in the Shell is terrific on home video. Deep saturated colors, impeccable black-levels, crisp, sharp, wonderful contrast, and impressive in its detail. The brightly colored neon, and the body suit worn by Major, with its reflective/invisibility, positively leap from the screen in 2D.

Shots that begin very wide, above the city, swoop down and through building structures and the cities holographic projections revealing excellent detail.

Ghost in the Shell’s Dolby Atmos track (which presents as Dolby TrueHD for those not Atmos equipped) is superb. Rupert Sander’s choice of composers, a combination of Lorne Balfe and Clint Mansell, produce a thrilling score, pulsing and throbbing with techno-marvel, suited very well to the film. It’s a terrific score that lives and owns the aural space.

This Blu-ray release also makes excellent use of surround sounds configuration to bring you in to the action, particularly with the sounds of electronics, whipping and floating across the sound design.

What’s here is good, anchored by the 30 minutes Hard-Wired Humanity: Making Ghost in the Shell, which covers the inspiring source material and the intent behind the adaptation. This is a good piece that examines almost every element of the production with costumes, weapons, action sequences, design elements, and everything else getting a moment to shine. Section 9: Cyber Defenders, clocking in just north of 11 minutes, takes a closer look at the Section 9 team as it related to the story, and some of the design elements. The Man & Machine: The Ghost Philosophy, examines the prescient nature of the original story and what this story portends for our future.

The VUDU redemption also adds an Inside the Shell special feature with a ground-level look at the production leading up to the premiere in France. This bonus content is combined with the other special features on ParamountMovies.com to create a single, 80 minutes special feature.

Digital (UV and iTunes) version of the film.

Ghost in the Shell is entertaining. Well made, interesting, and showing a future and a world well-worth exploring. The casting controversy proved too high a hurdle for the film to recover from, though the availability of the home video version (and streaming) will mean that more people will be able to discover the adaptation and evaluate, or reevaluate the film on its merits (and, yes, the casting controversy should be a part of that critical evaluation). This kind of film–action spectacle in a future where technologies abundance has reduced society’s humanity–isn’t everyone’s cup of tea (and admittedly has always been mine). For those who enjoy stories on that canvas, Ghost in the Shell is worth exploring. A well-made production with a brilliant performance at its heart.

I hope that Hollywood takes note that representation matters. While the matter of Major’s casting isn’t quite black and white, it underscores the lamentable (and unacceptable) state of characters and roles in film and television showcasing people of color and minorities. Things are getting better, but part of that is because of the ruckus vocal critics are causing. 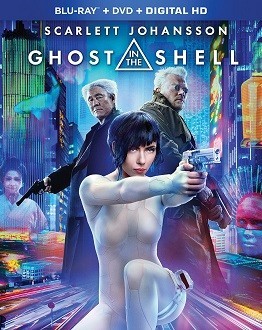