A romantic comedy lacking in both romance and comic flair, Huck Botko’s Who Gets the Dog? features personable actors in a forgettable, disposable domestic situation that doesn’t have one real shred of wit or a genuine belly laugh.

A romantic comedy lacking in both romance and comic flair, Huck Botko’s Who Gets the Dog? features personable actors in a forgettable, disposable domestic situation that doesn’t have one real shred of wit or a genuine belly laugh. Dog lovers might find the mixed breed title pooch adorable, and the film is never really mean-spirited or crass. It’s just not memorable either.

Minor league hockey player Clay Lonnergan (Ryan Kwanten) and Dr. Olive Greene (Alicia Silverstone) have decided to separate when she decides she’s ready for a baby and he isn’t. Dividing the household assets proves no problem until they get to Wesley, their beloved dog. Neither Clay nor Olive wants to give up primary custody of him, and the court appoints Canine Behaviorist Dr. Wendy (Amy J. Carle) to make the determination of who will get permanent custody after sixty days of scheduled and unscheduled visits. Olive believes she can strengthen the bond between her and Wesley by taking him to dog whisperer Glenn Hannon (Randall Batinkoff), but Glenn takes more interest in Olive than in Wesley. Clay believes just being a “bro” with his pet will be enough to insure his successful claim on the dog, but his carefully planned scheduled visit with Dr. Wendy is a disaster. It’s really unclear who’s doing to get the dog.

There is nothing very inventive or hilarious in the script by Matt JL Wheeler and Rick Rapoza. All of the slapstick mayhem that Wesley gets into when left to his own devices is pretty predictable and is thus lacking the humor of surprise. Hannon’s take charge attitude toward being the “leader of the pack” which always gets Wesley’s immediate attention is good for a few chuckles, and the introduction into Clay’s life of a lonely little boy (Paul Rawson) whom he teaches to be a goalie shows he’s ready for fatherhood and adds some warmth to the basically formulaic break up-and-make up scenario of the plot. There’s a silly interlude at a doggie day care center that stresses the creative spirits of the animals (much more could have been done with this concept), and star Ryan Kwanten gets to dress up in a bumblebee costume to try to “cute” his way back into Olive’s heart. Overall, Huck Botko’s direction is pedestrian but unobjectionable.

Both Alicia Silverstone and Ryan Kwanten are personable performers who can act this kind of fluff in their sleep, and the script doesn’t really offer them many emotive challenges. (The actors likely found the winter filming conditions in Chicago more trying than anything they have to act in the movie. They all look very cold throughout.) Clay’s best friend Rhett who teaches boys’ hockey skills offers Matty Ryan an agreeable if thankless role in the film. Randall Batinkoff as Clay’s rival for Olive’s affections is the standard feet-on-the-ground kind of romantic antagonist, the opposite of the man-child Kwanten is playing. Danny Rhodes has some amusing moments as the supervisor of doggie day care, and Amy J. Carle is the standard issue serious doctor assigned to evaluate the flaky central duo. The dog playing Wesley goes through his paces with superb professionalism.

The film’s original theatrical 2.40:1 aspect ratio is faithfully rendered in this transfer which has been anamorphically enhanced for widescreen televisions. Aside from a small bit of moiré, the image sparkles with excellent sharpness throughout, enough to see hair textures and facial features and the creases in Clay’s leather jacket. Color is strong and nicely saturated without anything ever being overblown, and skin tones are quite believable. Contrast has been consistently applied throughout. The film has been divided into 28 chapters.

The Dolby Digital 5.1 sound mix is decidedly frontcentric with dialogue placed in the front channel and just the barest whisper of the music tracks echoing in the rears while showing strong spread through the front channels. Atmospheric effects likewise get stronger direction to the fronts rather than the rears.

Who Gets the Dog? is a pleasant but completely forgettable romantic comedy with the viewer knowing before the film starts where it’s going and how it ends. Entertaining stars like Ryan Kwanten and Alicia Silverstone can’t do much with such lackluster material, but the movie plays smoothly and, at an hour and a half, doesn’t overstay its welcome. 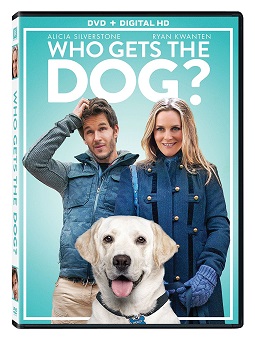