Forum List What's new Dark Style Change width
Log in Register
What's new Search
Menu
Log in
Register
Navigation
Install the app
More options
Dark Style
Close Menu
Posted on November 13, 2018 by Josh Steinberg
You are using an out of date browser. It may not display this or other websites correctly.
You should upgrade or use an alternative browser.
The 1995 comedy about a mobster-turned-Hollywood producer still packs a punch. 4.5 Stars

Get Shorty, director Barry Sonnenfeld’s 1995 comedy based on the Elmore Leonard novel, remains a clever and insightful comedy over twenty years since its original release. John Travolta leads a pitch perfect cast that includes great turns from Gene Hackman, Rene Russo, Danny DeVito and a handful of other outstanding players in supporting roles. Though the types of films in fashion may have changed since Get Shorty’s initial release, the people making those films haven’t, and the film works just as well today as it did then.

Barry Sonnenfeld’s film of Get Shorty was a near-perfect comedy in 1995, and time has not robbed the film of any of its stature. Working from an Elmore Leonard novel (well adapted by screenwriter Scott Frank), Sonnenfeld and his first rate cast bring the story to life in a big way. The laughs have endured, despite the passage of time and repeated viewings, because the characters themselves are never aware that they’re in a comedy. The genius of the film is its knowledge that because Hollywood is such a ridiculous place, it’s not necessary to go for cheap laughs or to play everything for broad laughs; simply put an outsider from another profession into the middle of it and let that outsider observe how crazy it all is.

Chili Palmer is that outsider. John Travolta, back on the A-list after his hugely successful role in Pulp Fiction, was inspired casting; Travolta is so good as the mobster-turned-movie producer that it’s impossible to imagine anyone else in the role. As the sleazy producer who lures Travolta in, Gene Hackman is a hilarious blend of movie savant and idiot man-child. Hackman steals every scene he’s in, completely credible as a guy who can get a movie off the ground but couldn’t follow a simple instruction if his life depended on it. Rene Russo brings a blend of outward sex appeal, but gives her character an inner life that suggests she’s brighter and more interesting than the men in her life have given her a chance to show. As Hollywood’s most in-demand actor, Danny DeVito is able to take every stereotype about entitled and aloof actors and turn them into a character that’s actually believable. Dennis Farina perfectly plays his supporting role as a Travolta’s former boss, a two-bit gangster from Miami who thinks too highly of himself. Delroy Lindo makes a hilarious contrast as a west coast mobster who Travolta sees right through. James Gandolfini is memorable in a small role as a stuntman-turned-enforcer who despite his impressive size is no match for Travolta’s wit.

In Get Shorty, everything just works. While all of the ingredients are there in Elmore Leonard’s source material, and while Hollywood had taken several cracks at Leonard’s works in the past, Get Shorty was arguably the first major film to actually get the tone of Leonard’s writing to translate well to the screen. Scott Frank’s smart script doesn’t have a wasted line or a misplaced comma; it moves, seemingly effortlessly and very efficiently, from Miami to Las Vegas to Hollywood. The premise that Hollywood is like a mob of its own wasn’t new, but the idea that Hollywood wasn’t very good at it, and that a real gangster could wipe the floor with these guys, was. Chili Palmer comes to Hollywood starstruck, in awe of the town and its industry, but quickly realizes that it’s all a hustle, and that with not much effort, he could beat them all at their own game.

More than twenty years after its original release, Get Shorty’s sendup of Hollywood is as biting and relevant as ever.

Shout Factory’s release, as part of their Shout Select line, offers a new 4K-derived transfer of the film in its original theatrical aspect ratio of 1.85:1. (The packaging does not state if the new 4K transfer is from the original negative or another source.) The film’s color scheme looks phenomenal, from the garish hues of art deco Miami to the bright sunshine of Hollywood. Blacks are particularly strong, and well represented between Travolta’s hair and leather jacket. The only minor criticism that the film is at times slightly less sharp than expected, though this may be a reflection of the film stocks used rather than a fault of the disc. (In particular, indoor and nighttime footage can seem slightly less impressive than exterior scenes.) Director Barry Sonnenfeld began his career as a cinematographer, and Get Shorty has always been a good looking film; this disc serves it well.

Shout Factory’s release includes two audio options, both presented in the lossless DTS-HD MA format. Both tracks sound perfectly clean and clear, without a hint of hiss or any other age-related artifacts. The default option is the 5.1 track, which is mostly front-oriented. Dialogue is channeled through the center, while the film’s music (a mix of John Lurie’s original score and contemporary music) is a little more expansive. Dialogue is well-recorded and mixed well within the track, allowing all of the jokes to land perfectly. A 2.0 stereo downmix is also included, which has less separation but is otherwise fine.

All of the disc’s special features are carried over from the previous MGM/FOX Blu-ray release, which sourced those features from an earlier DVD release. Shout Factory has not added any new bonus material to this Shout Select release.

Audio Commentary With Director Barry Sonnenfeld – Sonnenfeld makes some good observations and the track is generally worthwhile, though there are some silent gaps as the film progresses.

Wiseguys And Dolls (20:30, SD) – A featurette from 2004 focused on characters played by Lindo, Russo and Farina, as well as a look at the film’s use of action and violence.

Going Again! (5:35, SD) – Sonenfeld discusses how the scene where Russo introduces Travolta to DeVito was shot, and includes some of DeVito’s improvisations which did not make the final cut.

Page-To-Screen Of Get Shorty (29:35, SD) – An episode of the Bravo channel show hosted by Peter Gallagher, taking a look behind-the-scenes at the film’s production.

Vignettes (6:33, SD) – Four different interview segments with Sonnenfeld and DeVito that didn’t quite fit into the other featurettes but were deemed worthy of inclusion.

The Graveyard Scene (7:47, SD) – The disc’s lone deleted scene is presented with a full introduction by director Sonnenfeld and actor Ben Stiller. As Sonnenfeld notes in the intro, the scene on its own is great, but ultimately unnecessary in the finished film.

Reversible Cover Art – One side include’s Shout’s new cover design, while the other side includes the original theatrical poster design.

Get Shorty is a hilarious comedy about the mob and Hollywood that holds up more than twenty years after its original release. The casting is still pitch perfect, with John Travolta turning in one of his finest performances. (Sadly, a 2005 sequel, Be Cool, was unable to replicate the original’s charms.) Shout Factory’s new release of the film carries over all of the previous bonus features from the previous MGM DVD and Blu-ray editions, which were of a pretty high quality to begin with, and adds a new 4K transfer of the main feature. For those who don’t own the film in HD, Shout’s release is an obvious choice, but a lack of new supplements may deter owners of the previous Blu-ray release from double dipping.

Great review, and agree. This movie still plays like gangbusters. Travolta, Russo, Hackman, DeVito, Lindo, Gandolfini, Farina, Bette Midler (!) all firing on all cylinders. A wonderful movie that, if made today (if it even does get made) would be relegated to a Netflix movie. Or...er...an EPIX TV series.

Side note: it probably took me about 25 viewings of this to realize the Alex Rocco bit in the beginning was a Godfather tribute. Because I'm dense like that.

Great review - I'm double-dipping! I love all the new 4K scans coming from MGM's library - I had despaired of this happening just a few years ago.
You must log in or register to reply here. 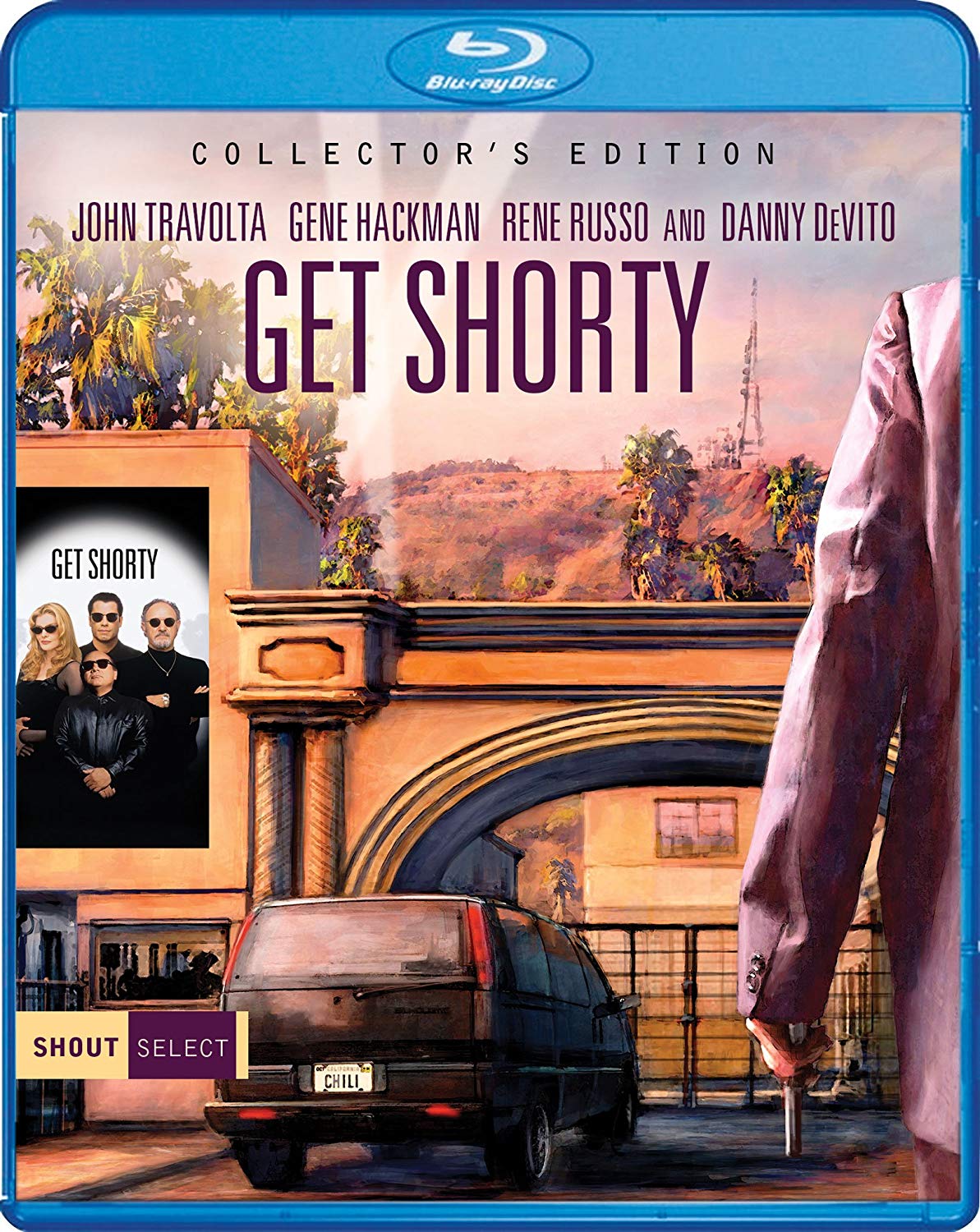