Forum List What's new Dark Style Change width
Log in Register
What's new Search
Menu
Log in
Register
Navigation
Install the app
More options
Dark Style
Close Menu
Posted on March 26, 2021 by Todd Erwin
You are using an out of date browser. It may not display this or other websites correctly.
You should upgrade or use an alternative browser.
Worthy upgrade 4.5 Stars

Andrew Niccol’s debut feature, Gattaca, is what I would call a timeless piece of science fiction. Nearly twenty-four years after its initial theatrical release, it does not feel dated in any way. I’m not just talking about its 1950s futuristic-inspired production design. The film’s core message of genetic engineering versus natural birthing of humans is something still discussed and debated today. Vincent (Ethan Hawke) was conceived naturally by his parents, something his parents, brother Anton, and society can only see as a disadvantage. His genetic makeup includes a heart defect that has reduced his life expectancy of only 30 years, making him an “invalid” member of society, doomed to menial tasks such as custodial work. Vincent’s dream, though, is to travel to space, something he was only able to dream of, until he meets a man (played by Tony Shalhoub) who can help Vincent take on the identity of Jerome (Jude Law), a former Olympic swimmer with an impeccable genetic profile that became paralyzed from the waste down after being hit by a car. The keys to Vincent successfully taking Jerome’s identity are to leave no genetic material of his behind when he is out in the world and have plenty of Jerome’s genetic material for random blood and urine tests, as well as trace hair and skin cells. When the mission director at Vincent’s job at the Gattaca Aerospace Corporation is murdered, detectives (Alan Arkin and Loren Dean) begin combing the offices in search of clues. One of those clues belongs to Vincent, setting up the big mystery (or red herring) that carries us through the story. The suspense isn’t whether Vincent is guilty of murder, as we the audience are fairly certain he is innocent, but whether or not he will eventually get caught impersonating Jerome. Complicating matters is Vincent’s attraction to co-worker Irene (Uma Thurman), who has been asked by Gattaca Director Josef (Gore Vidal) to assist in the investigation.

Gattaca, upon its release, was considered by NASA scientists as the most accurate science fiction film ever made. That is high praise for a film that that only managed to earn $12.5 million at the box office on a $36 million budget (I attribute much of that to the film’s confusing marketing campaign). This is a thinking person’s science fiction film, sometimes coming off a bit dry with its dystopian setting. The performances are what draw you in, particularly the three main leads who were still fairly early in their careers – Ethan Hawke, Uma Thurman, and Jude Law. Veteran character actor Alan Arkin is good, but his character really doesn’t have much to do other than keep the red herring in motion. The same can be said of Gore Vidal. All in all, though Gattaca is just as timely today as it was in 1997.

Gattaca was shot on film using the Super 35 format on Arriflex 35mm cameras, cropped to the 2.39:1 aspect ratio and completed on film. Sony has created a new 4K digital intermediate from the original camera negative (per the studio’s press release), and the 2160p HEVC-encoded transfer on the UHD disc includes HDR10 high dynamic range. The results, as expected in a Sony catalog UHD release, are spectacular and a major improvement over the excellent for its time 2008 Blu-ray release (included in this set). This is a much sharper and detailed image with natural film grain left intact (by comparison, the 2008 Blu-ray is much softer and film grain appears more like noise). Textures are more refined, as are facial features. This is also a much more stable image, as the Blu-ray suffers from some occasional weaving. Colors are more vivid and naturalistic, despite the film’s often sterile production design. Contrast is vastly improved upon, too, with deeper blacks and even more noticeable, brighter whites. Another stellar catalog release on UHD from Sony.

Sony has provided Gattaca with a new Dolby Atmos mix for this release, which is a nice, subtle improvement over the film’s original 5.1 mix (included on the disc in DTS-HD MA). This is a dialogue-driven drama, so don’t expect to be blown away by this new spatial mix, which is still relatively front-heavy while still adding some immersive effect. Surrounds and heights are used primarily for atmospheric effects, adding some dimensionality to its settings (such as offices, mansions, etc.). LFE is a bit punchier than on the 5.1 mix, adding a bit more emphasis on the few rocket launches. Dialogue remains clear and understandable throughout.

Blu-ray Disc
This disc is identical to the 2008 Blu-ray release and contains the same special features.

Digital Copy: An insert contains a code to redeem a digital copy in UHD on Movies Anywhere.

Sony does another standout job of bringing a catalog title to the UHD format with their release of Gattaca.

Just finished watching my copy. I was a huge fan of this film when it came out, and nice to see that 20+ years later, I still am. A fantastic story, great acting (this was my first time seeing Jude Law onscreen), wonderful cinematography, a deft direction.

I need to put this in my rotation of films I revisit regularly.

I never saved anything for the swim back...

Have the disc and played a few scenes and the image looks very nice. A great film and will watch all of it this weekend.

The availability of this 4K disc release is so scarce that Amazon has a new release date of June 15th for it.

Best Buy seems to have it in-stock, but DD has it backordered too. Edit: I guess this review is of the Steelbook 4K release and this new June 15th preorder is of a non-Steelbook 4K disc release.

So I have a crew of fairly young staff who were newly hired in the last 2-3 years, straight from graduating college. They know me as the guy who knows about "old films" (meaning, you know, anything not made in the 00s). So after viewing my copy, I texted them that they should put Gattaca on their list, thinking they likely hadn't seen it.

Three of them responded "oh yeah, we've seen it, great film...they made us watch it in high school."

Is that what high school is like now? Let's watch Gattaca? I had to read All Quiet on the Western Front!

So I have a crew of fairly young staff who were newly hired in the last 2-3 years, straight from graduating college. They know me as the guy who knows about "old films" (meaning, you know, anything not made in the 00s). So after viewing my copy, I texted them that they should put Gattaca on their list, thinking they likely hadn't seen it.

Three of them responded "oh yeah, we've seen it, great film...they made us watch it in high school."

Is that what high school is like now? Let's watch Gattaca? I had to read All Quiet on the Western Front!

Just noticed that my Movies Anywhere code redeemed in 4K on MA, Vudu, FandangoNow, and iTunes, but HD on Prime Video despite the fact that the movie IS available in UHD on Prime Video. Amazon is giving me the usual run around that I didn't purchase it in 4K, I purchased in HD.
You must log in or register to reply here.

Friday at 3:40 AM
Ronald Epstein 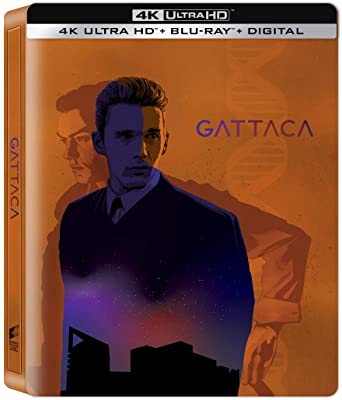