Attenborough and Kingsley at their best 4.5 Stars

As I sat down to view Gandhi on 4K UHD Blu-ray for this review, it suddenly dawned on me that, for some unknown reason, I had never watched this movie before, and also knew very little about this historical figure. The movie opens with Gandhi’s (Ben Kingsley) assassination in January of 1948, then jumps back to South Africa in 1893, as Mohandas Gandhi is travelling by train, in first class, only to be thrown off the train for not being white. He has arrived from India (as a London-educated lawyer) to help Indian immigrants stand up and fight for their civil rights. After a small victory, he returns to India, where he begins to fight (nonviolently) for India’s right to independence from Great Britain.

Watching Gandhi 38 years after its original theatrical release, I recognized two of the Indian actors who would later be cast in Steven Spielberg’s Indiana Jones and the Temple of Doom – Roshan Seth as Pandit Nehru (who would later become Prime Minister of India), Amrish Puri as Khan (Gandhi’s employer in South Africa) – and many noted British and American actors, Edward Fox as General Dyer (who would lead the massacre ending the first half of the film), John Gielgud as Lord Irwin, Trevor Howard as Judge Broomfield, John Mills as The Viceroy, Nigel Hawthorne as Kinnoch, Martin Sheen as journalist Walker, and Candice Bergen as photo journalist Margaret Bourke-White. The movie truly belongs to Ben Kingsley, who delivers a well-deserved Oscar-winning performance as Gandhi, who at all times feels and looks like the real man, never a performance.

As one would and should expect, Sony has done a marvelous job bringing Richard Attenborough’s biographical epic to 4K. Per the restoration notes in the collectible book from the Columbia Classics Collection boxed set, Grover Crisp’s team scanned the original 35mm camera negative in 4K to create this 2160p HEVC-encoded transfer, removing scratches and dirt buildup digitally, then a color pass using high dynamic range (this UHD disc uses HDR10, while HDR10 and Dolby Vision are available on the digital versions). This is the best the film has probably looked since the film’s original 70mm engagements in 1982. This is a very film-like image, with natural-looking film grain. Overall sharpness and detail is exceptional, from the textures of the various types of fabric used in the period costumes to facial features and set decorations. Colors appear more natural and vivid than on the included 25th Anniversary Blu-ray release. Contrast is also excellent, with deep blacks that not only retain shadow detail but also more varying gradations of black. The film has been split over two UHD discs to maximize bit rates and replicate the original theatrical engagement.

Initially, per the restoration notes in the Columbia Classics Collection book, Gandhi was going to be released on this set with the same 5.1 mix as the previous 25th Anniversary Blu-ray release. Going back to the 70mm six-channel mix, Grover Crisp and his tram at Sony found that, along with the available Dialogue, Music and effects stems plus the complete music score in stereo lent itself very well to creating a new Dolby Atmos mix. Much like the mix for Lawrence of Arabia, this is not necessarily a more gimmicky mix, but a much more immersive one. Dialogue is clear and understandable throughout, placed along with other discrete sounds with precision within the listening environment. Music and ambient effects are extended to the surrounds and overheads, completing the immersive effect. For the purists out there, Sony has included 5.1 and 2.0 stereo mixes in DTS-HD Master Audio.

Another important note: Although the movie is currently only available in the oversized boxed set, the discs are housed in a standard 2-hub UHD keepcase featuring original poster artwork and a slipcover with more updated artwork.

UHD Disc One contains the first part of the feature, while the second includes two trailers. The 2-disc 25th Anniversary Blu-ray release rounds out the included extras.

UHD Disc Two:
The trailers will begin to play automatically after the movie has completed, or can be selected from the main menu.

Blu-ray Disc One:
The entire feature is contained on this first disc, plus a few select special features.

Blu-ray Disc Two:
This second disc contains the rest of the special features. 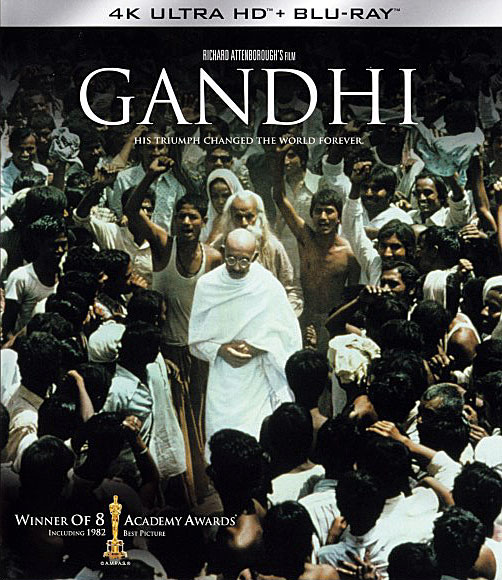