The abbreviated seventh season of HBO’s popular Game of Thrones manages to strategically set all the pieces into play for the upcoming final season’s showdown between Westeros and the White Walkers.

As the White Walkers continue their march south, the seven kingdoms of Westeros are still in a state of Civil War, with Daenerys Targaryen (Emilia Clarke) arriving back home to Dragonstone looking for allies to join her in defeating and recapturing King’s Landing from Cersei Lannister (Lena Headey), while Jon Snow (Kit Harrington) and his sister Sansa Stark try to keep the White Walkers from invading from the North all the while trying to keep Cersei from sending an army to reclaim Winterfell and the Wall. Trying desperately not to give anything else way, the seventh season of HBO’s Game of Thrones is loaded with reunions, unlikely alliances, double-crosses, plot twists, and with its additional battle sequences scattered throughout the shortened season, a more compressed timeline.

Production values remain high (it is still the most expensive episodic show on television), and with the heightened emphasis on action, it is understandable why only seven episodes were produced for this season (at roughly the same overall cost as previous ten-episode seasons). Peter Dinklage’s portrayal of Daenerys’ Hand, Tyrion Lannister, continues to be the moral compass for the show, a man who has changed dramatically despite many of his faults, who wants peace for his homeland without endangering or sacrificing the lives of the civilians. Nikolaj Coster-Waldau is another standout, as Jaime Lannister, who has a complicated relationship with his sister, but is also conflicted in his loyalty to family, especially his brother Tyrion, whom the rest of the family has despised. You can see that pain and conflict in his performance without him having to say it aloud. The series, as a whole, has shifted from a male-dominated leadership on-screen to the woman (Daenerys, Cersei, Sansa, etc.) taking over leadership duties within Westeros.

As expected, season seven of Game of Thrones looks spectacular on Blu-ray in 1080p. I had originally watched the season on HBO On-Demand on DirecTV last month, and Blu-ray is the best way to watch this series. The overall picture is much sharper here, with finer detailing of things such as blades of grass, beard stubble, and woven fabrics. Colors are much more natural and vibrant (when they need to be). Contrast is also exceptional, with deep blacks that retain shadow details, and bright whites that don’t clip. There was also no evidence of banding or compression artifacts. The Blu-ray release is a giant step above the compressed 1080i broadcasts and various resolutions available on your TV provider’s On-Demand and streaming versions on HBO-Now and HBO-Go.

Another big upgrade on the Blu-ray is the Dolby Atmos mix that also contains a core lossless Dolby TrueHD 7.1 mix. Unfortunately, HBO continues to author their Blu-ray releases of Game of Thrones with lossy Dolby Digital 5.1 as the default (the exceptions are the original, now out of print first three seasons which contained DTS-HD MA 5.1 tracks). This is entirely unnecessary, and the authors could easily program the disc to select Dolby Digital if something in the audio chain (such as the receiver) was not compatible with Dolby TrueHD or Atmos, as Warner had done on several of their early Blu-ray releases. There is another authoring blunder in audio, too, and that is programming the commentaries as Bonus Audio, which requires your Blu-ray player to have its BD Audio Mix setting to “ON,” but by doing so, you disable Atmos playback capabilities. Selecting a commentary track with BD Audio Mix set to “OFF” results in playback in the audio mode you selected (or defaulted) when the disc was inserted. The only workaround is to toggle through the various languages with your BD player’s Audio button until you get to the commentary track you want to listen to. This is Basic Blu-ray Authoring 101 knowledge (and so is adding the ability to begin where one left off on a disc which is also missing on this set), so it is unacceptable to see discs authored in this way from a major studio eleven years after the format debuted, and the reason I knocked a full point off my audio review.

All that being said, like all other seasons released in Dolby Atmos, this is the only way to listen to Game of Thrones. For those with Atmos, you are in for a treat for your ears, with the sounds of arrows and dragons flying over your head, and a more immersive experience. LFE also has a much more intense presence, even for those without Atmos but have selected the Atmos track to enjoy up to 7.1 audio from the Dolby TrueHD 7.1 core. Sound imaging is precise, with cues set in various points in the room, while dialogue is always clear and understandable without getting lost in the mix.

For those who order the first pressing, a fourth disc is bundled with the set, Game of Thrones: Conquest & Rebellion. As I stated above, to listen to the commentaries, you must either enable BD Audio Mix on your Blu-ray player or toggle through to that track using the Audio button on your BD player’s remote. Sadly, none of the individual reflection featurettes that appeared after each episode on HBO On-Demand have been included.

In-Episode Guides for each episode: The exhaustive compendium provides descriptions of the show’s characters, locations, and history in context with events of each episode.

Disc One:
Audio Commentary with Director Jeremy Podeswa, and cast members Gwendoline Christie and John Bradley on Episode One: Dragonstone

Audio Commentary with Director Jeremy Podeswa and Director of Photography Greg Middleton on Episode Seven: The Dragon and the Wolf

From Imagination to Reality: Inside the Art Department (1080p): A two part look at the Production Design of the seventh season by Deborah Riley and her crew. Part One (24:26) and Part Two (21:59).

Fire & Steel: Creating the Invasion of Westeros (1080p; 30:02): A behind the scenes look at key moments from the seventh season.

Bonus Disc:
Game of Thrones: Conquest & Rebellion (1080p; 44:47): Similar to the Histories & Lore segments, this limited edition bonus feature looks at history of Westeros thousands of years before the series began. Ironically, the default audio on this disc is Dolby TrueHD 5.1.

Episode Guide: An insert contains summaries of each episode.

Digital Copy: An insert contains a code to redeem a digital copy of the season on UltraViolet, iTunes, and Google Play Movies.

The seventh season of Game of Thrones does an excellent job of setting the chess pieces into motion for the series finale set to air sometime in 2019. Despite the usual authoring issues that HBO continues to make with the Blu-ray releases of this series, this is hands down the best way to watch the series in terms of video and audio quality. 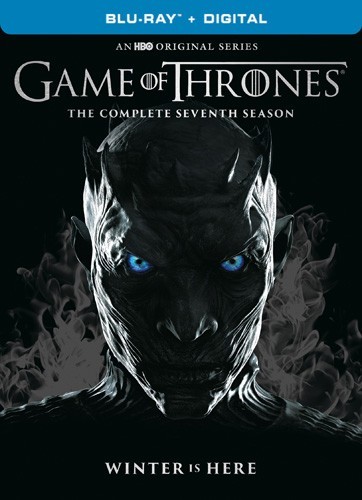