“There's nothing in the world more powerful than a good story.” – Tyrion Lannister 4.5 Stars

The final season of HBO’s Game of Thrones finally arrives on physical media, besting the streaming digital version in both audio and video, plus a wealth of audio commentary tracks.

Out of all eight seasons, these final six episodes are quite possibly the most divisive and controversial among the show’s die-hard fans. Bringing closure to anything this popular is a daunting task – ask the creative teams behind Lost, Seinfeld, How I Met Your Mother, The Sopranos, even Chuck. A finale is often a slippery road along a the edge of a razor. An easy cop-out would be a sure-fire crowd-pleasing finale, or roll the dice and go with something that takes fans by surprise. Any fan of Games of Thrones should know that quite often the storylines would take the latter road. Look at episodes such as The Rains of Castemere (aka The Red Wedding), The Lion and the Rose, Mother’s Mercy, and Baelor, to name a few. So, that leaves this reviewer wondering why so many were upset with how the series ended. Sure, many of us expected the series to end as we had expected, with a certain un-named character taking possession of the Iron Throne. If that had happened, then this would not be Game of Thrones, and quite possibly fans would also be in an uproar, although perhaps not as much so, that writers David Benoiff & D.B. Weiss took the easy and expected road. One other item to consider is that for its first six seasons (all of which consisted of ten hour-long episodes), the series was more character driven, giving us one, maybe two big action-packed episodes per season. At the end of the sixth season, it was announced that Game of Thrones would end after season eight, and that these last two seasons would be shortened (seven episodes for season 7, six for season 8). With a shortened episode order from the network, and the fact that the producers were instructed to wrap up the storylines in the final 13 episodes, the show shifted to one that was more action-based, more spectacle than character study. Viewers got to spend less time with their favorite characters and more time on the battlefield.

So, how was season eight? It was very good, in my opinion, but not great. The first two episodes, Winterfell and A Knight of the Seven Kingdoms, refamiliarized us with were the previous season left off, re-introduced us to its main characters, and set us up for the epic battle against the Night King and his army of White Walkers in The Long Night. As exciting as that episode was, I felt that the battle lasted a bit too long (it is the longest episode in the series, running 81 minutes), although it does come to a thrilling conclusion. The Last of the Starks also could have used some trimming (it runs 77 minutes), as everyone rejoices but then decides who they should follow as the showdown between Daenerys (Emilia Clarke) and Cersei (Lena Headey) nears. The final two episodes, The Bells and The Iron Throne, give us that showdown we have been waiting for (but possibly not expecting) and closure to many of the storylines as characters begin to go their own way. I found the ending to be satisfying and very much in the tradition of the series.

The season is spread out over three discs per format:

Disc One:
Episode One: Winterfell
Episode Two: A Knight of the Seven Kingdoms
Episode Three: The Long Night

Disc Two:
Episode Four: The Last of the Starks
Episode Five: The Bells

Game of Thrones is broadcast on HBO in 1080i and streamed in up to 1080p On Demand through the HBO-Go and HBO Now apps as well as through a subscriber’s cable or satellite service provider. When I reviewed the streaming HDX version on Vudu six months ago, I thought the image quality was not quite up to what Blu-ray can offer. Comparing that now to both the NBlu-ray and UHD versions that were included in this set, I noticed a level of noise that was not as noticeable on the Blu-ray and virtually non-existent on the UHD. HBO’s UHD release, which likely is a 2160p upscale (IMDB does not specify what resolution the season was captured or completed at, while ShotOnWhat indicates the season was completed in 1080p), includes both Dolby Vision and HDR10 flavors of high dynamic range. I screened this set on an HDR10 capable display, and in addition to the now non-existent layer of noise, I did notice a slight uptick in fine detail, such as the intricate woven textures of many of the costumes worn by the actors and the titles take on a more three-dimensional look during the opening credit sequence. Colors appeared a bit more stable, especially flesh tones which on both the digital and Blu-ray appeared much paler and washed out. Although black levels appeared more on the dark grey end of the scale, there was a slight increase in shadow detail, especially in the third episode, The Long Night. There were no noticeable compression artifacts whatsoever.

Game of Thrones was broadcast in Dolby Digital 5.1, despite being mixed in Dolby Atmos for its Blu-ray and UHD Blu-ray physical media release. As expected, the Atmos mix for each episode is spectacular, with more pronounced LFE and more precise placement of audio cues. Arrows and dragons fly overhead, wind bellows all around you, crowd noise abounds placing you right smack in the middle of it all. Although the digital release (at the time of my review) had a diminishing dialogue level issue on The Long Night, I did not find that the case on either the UHD or Blu-ray version. For some unknown reason though, these discs default to lossy Dolby Digital 5.1 instead of Dolby Atmos, so you will need to visit the Audio sub-menu before playing each disc.

To sweeten the pot on the Blu-ray and UHD releases, HBO has included audio commentaries, the usual In-Episode Guides (Blu-ray only), deleted scenes, and a set of featurettes. Blu-ray and UHD discs are nearly identical in content, except where noted. To listen to the commentaries on Blu-ray, you must either enable BD Audio Mix on your Blu-ray player or toggle through to that track using the Audio button on your BD player’s remote. The UHD discs do not exhibit this issue.

Disc One:
Audio Commentary on Episode One: Winterfell with Co-Producer/Writer Dave Hill and Production Designer Deborah Riley: This apparently is the first viewing of the episode by the two individuals, who often reflect on their time spent with the series.

Audio Commentary on Episode Two: A Knight of the Seven Kingdoms with Co-Executive Producer/Writer Bryan Cogman and Actor Broderick Portman (Podrick Payne): Both participants spend a lot of time discussing the many character arcs up to this episode.

Audio Commentary on Episode Three: The Long Night with Director Miguel Sapochnik, Director of Photography Fabian Wagner, and Camera Operator Sean Savage: Perhaps the more technical commentary of the three tracks for this episode, discussing many of the challenges they faced during the brutal 55-day shoot.

Audio Commentary on Episode Three: The Long Night with Stunt Coordinator Rowley Irlan and Actor Richard Dormer (Beric Dondarrion): For such a stunt-heavy episode, the two participants are oddly quiet for much of it, and is the most disappointing track of the three recorded for this episode.

Recaps & Previews (Blu-ray only): Available for episodes two and three.

Disc Two:
Audio Commentary on Episode Four: The Last of the Starks with Director of Photography David Franco and Actors Jacob Anderson (Grey Worm), Nathalie Emmanuel (Missandei), and Pilou Asbaek (Euron Greyjoy): The participants on this track have a lot of fun reflecting on the series and the episode in particular.

Audio Commentary on Episode Five: The Bells with Director Miguel Sapochnik, Director of Photography Fabian Wagner, and Actor Conleth Hill (Varys): The three have some fun, introducing themselves as someone entirely different before beginning to discuss the episode.

Recaps & Previews (Blu-ray only): Available for episodes four and five.

Audio Commentary on Episode Six: The Iron Throne with Director of Photography Jonathan Freeman and Camera Operator Ben Wilson: The two discuss how they achieved the “look” of the episode using various lenses and lighting techniques.

Histories & Lore (1080p; 26:51): Animated tours narrated by the characters themselves – King’s Landing, Greyjoy Rebellion, The Blackfyre Rebellion, The South, The Defiance of Duskendale and Maegor the Cruel.

Game of Thrones: The Last Watch (1080p; 103:00): This is a very interesting and surprisingly detailed look at the production of Season 8, without the need for a narrator or staged interviews.

Collectible Sigil Magnet: A magnet with the Winterfell sigil, included with the steelbook edition.

Digital Copy: An insert contains a code to redeem a digital copy from one of the following retailers: Vudu, iTunes, FandangoNow, or Google Play Movies.

Love it or hate it, the eighth and final season of HBO’s Game of Thrones comes to a crushing end. The UHD and Blu-ray editions are vast improvements over last summer’s digital release, which in turn was vastly superior to HBO’s 1080i broadcasts. However, the improvement in video from Blu-ray to UHD may not be as significant for some. 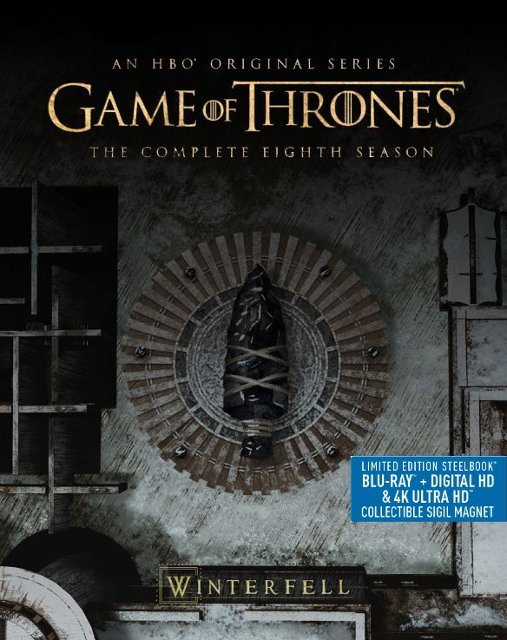