Forum List What's new Dark Style Change width
Log in Register
What's new Search
Menu
Log in
Register
Navigation
Install the app
More options
Dark Style
Close Menu
Posted on April 19, 2019 by Martin Dew
You are using an out of date browser. It may not display this or other websites correctly.
You should upgrade or use an alternative browser.

The premiere was also more positively received online than the season 7 finale, with 38% of tweets being “joyous”, compared to just 24% for the finale. To add to this, 56% of tweets about the season 7 finale were sad, compared to just 42% for the season 8 premiere. During the run-up to the series returning, musicMagpie analysed over 131 million tweets about the show to see which characters the public love, which they hate and “who they can’t stop talking about.”

To see the complete set of results, go here: https://www.musicmagpie.co.uk/most-talked-about-tv/#gameofthrones

Meanwhile, market research and data analytics firm, YouGov, looked into the impact that HBO carried among the public discourse. The results showed that HBO was undergoing a significant increase in both WoM and Buzz among US consumers aged 18-34 while the rest of the media sector remained relatively stable. The increase in both of these variables directly coincided with Game of Thrones’ arrival and marketing initiatives.  The data showed that over a quarter of all US consumers ages 18-34 said they had discussed HBO in the past two weeks. See the graphs below: 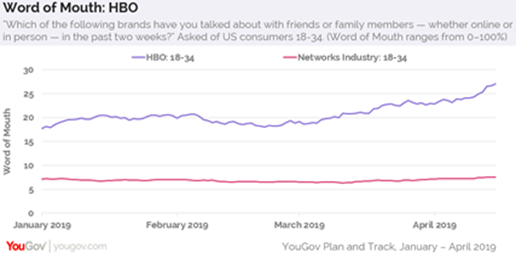 How long does it take to watch the most-binged Netflix TV series?