Forum List What's new Dark Style Change width
Log in Register
What's new Search
Menu
Log in
Register
Navigation
Install the app
More options
Dark Style
Close Menu
Posted on October 24, 2019 by Sam Posten
You are using an out of date browser. It may not display this or other websites correctly.
You should upgrade or use an alternative browser.
Did you guys ever WATCH the show? 4 Stars 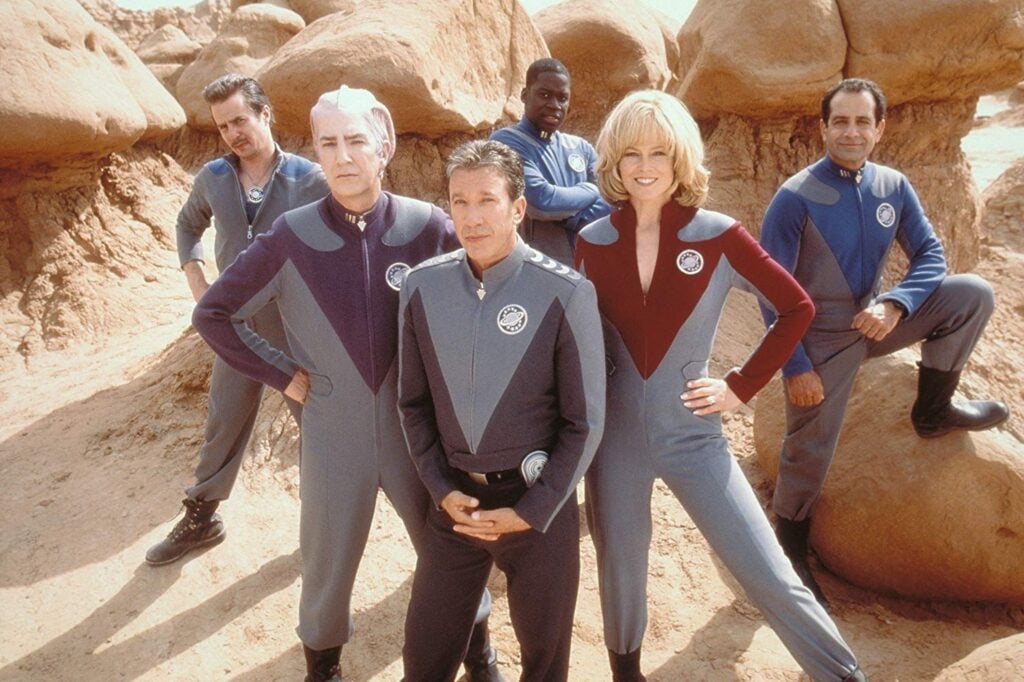 Sci-fi captain and aging over-actor Jason Nesmith (Tim Allen) is having a midlife crisis when he overhears feedback at one of his fan conventions that leads him to question just how beloved he really is. But fate intervenes when he mistakes a Thermian (From the Klaatu nebula, natch) named Mathesar (Enrico Colantoni) for an earthbound fan. The Thermians get Nesmith to come to their space ship and confront interstellar nemesis Sarris (Robin Sachs). When negotiations break down Jason heads back to earth to recruit the rest of his fellow actors to put together a more convincing performance. The cast includes Sigourney Weaver as sexy computer repeater Gwen DeMarco, Alan Rickman as underappreciated Shakespearan actor Alexander Dane, Tony Shalhoub as undercover asian and unimpressed doctor Fred Kwan, Sam Rockwell as soon to be dead RedShirt Guy Fleegman and Daryl “Chill” Mitchell as grown up child actor and navigator Tommy ‘Laredo’ Webber. The Thermians believe that the cast aren’t actors, but that the show was really a historic document, and they have engineered all of the shows macguffins in real life, including faster than light travel, transporters, weapons, and nav systems. The cast will have to adapt fast before Sarris terminates the Thermians and turns his sights on Earth next. To win, Jason and crew will have to call on Galaxy Quest superfan Brandon (Justin Long) and his band of re-enactors to help them bridge the tech and navigate the ship’s secrets. 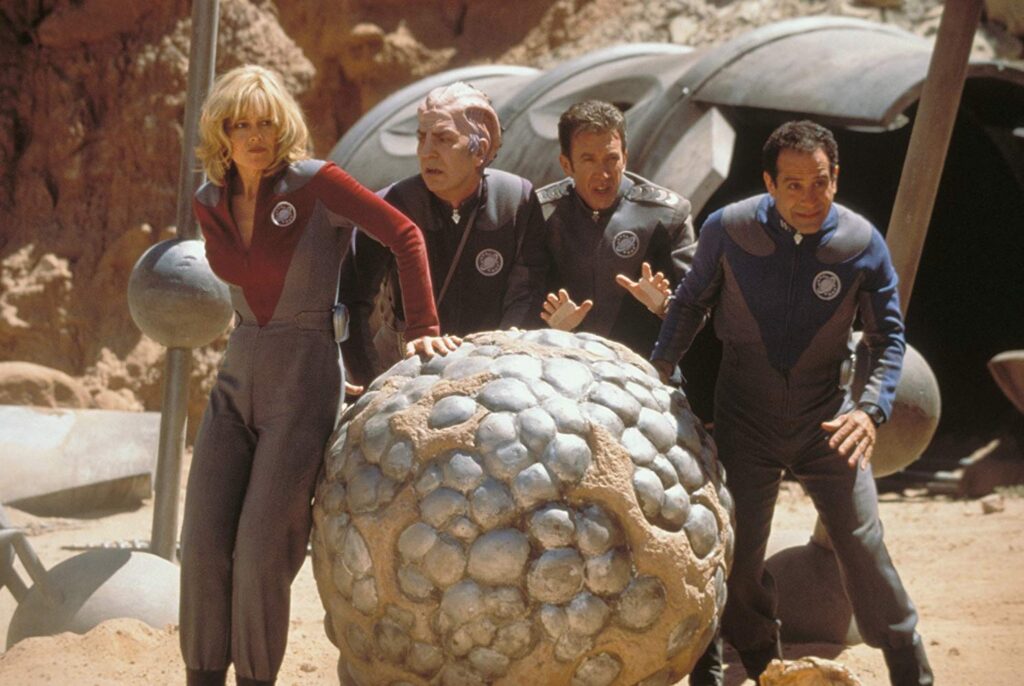 This shovelware copy of a 2009 Bluray is content identical to that release. You should really read Neil Middlemiss’s review cause this disk is exactly the same deal, just 10 years later.

Which isn’t that far off from the original DVD release.
Galaxy Quest DVD

I don’t have too much to add what Neil says better there, but I will say that Galaxy Quest got a bad break in the theaters and it’s taken literally 20 years of it showing on repeat on cable outlets and on multiple disk releases for it to find its way into audiences favorites lists. It’s a fine line between parody and flattery, and Galaxy Quest threads that needle with scientific precision and true heart. It could have bagged on fandom hard, but instead it uses the concept of parody and turns it on its head, showing that the writers and directors are fans themselves of the genre while still being keenly aware of how fandom can go off the rails.

Despite being a 10 year old transfer this 1080p encode really shows off the work that was put into the movie to match the effects of the shows it idolizes. The space battles and creature encounters hold up quite well. Sure there’s a bit of grain here and there but overall it looks well lit and very colorful. The CGI aliens remain convincing and well integrated and I didn’t notice any haloing or other detrimental problems with the transfer. 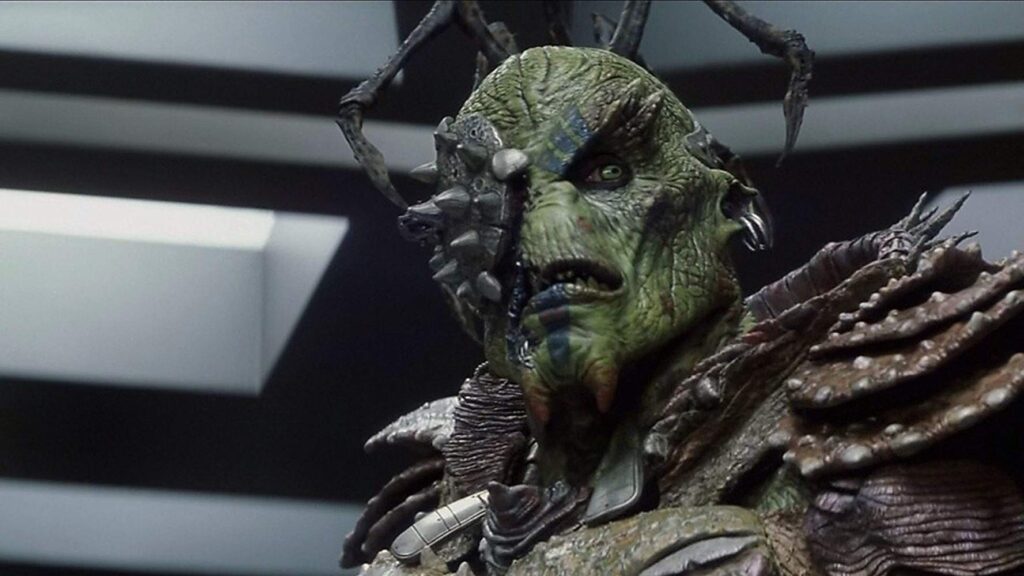 While very front heavy throughout, I found Galaxy Quest’s audio to be serviceable and a unique take on sci-fi sounds. None of the effects mimic better known properties and there are quite a few nice bass rumbles. There just isn’t a whole lot of action in the rears till late in the film. 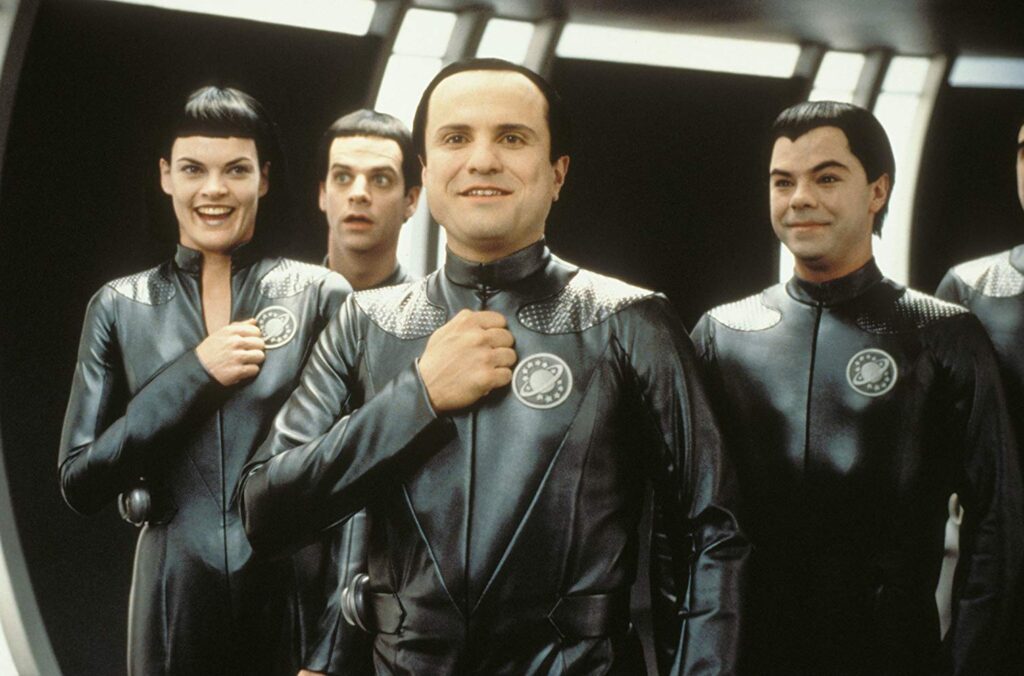 • Galactopedia—On-screen information about characters, ships, aliens and more
• Historical Documents: The Story of Galaxy Quest—Cast and filmmakers discuss how the film came together
• Never Give Up, Never Surrender: The Intrepid Crew of the NSEA Protector—Celebrates the incredibly talented cast
• By Grabthar’s Hammer, What Amazing Effects—Explores the effects by ILM and Stan Winston
• Alien School—Creating the Thermian Race—Actor Enrico Colantoni’s process of developing the voice and manner of an alien race
• Actors in Space— The cast
• Sigourney Weaver Raps
• Deleted Scenes
• Theatrical Trailer 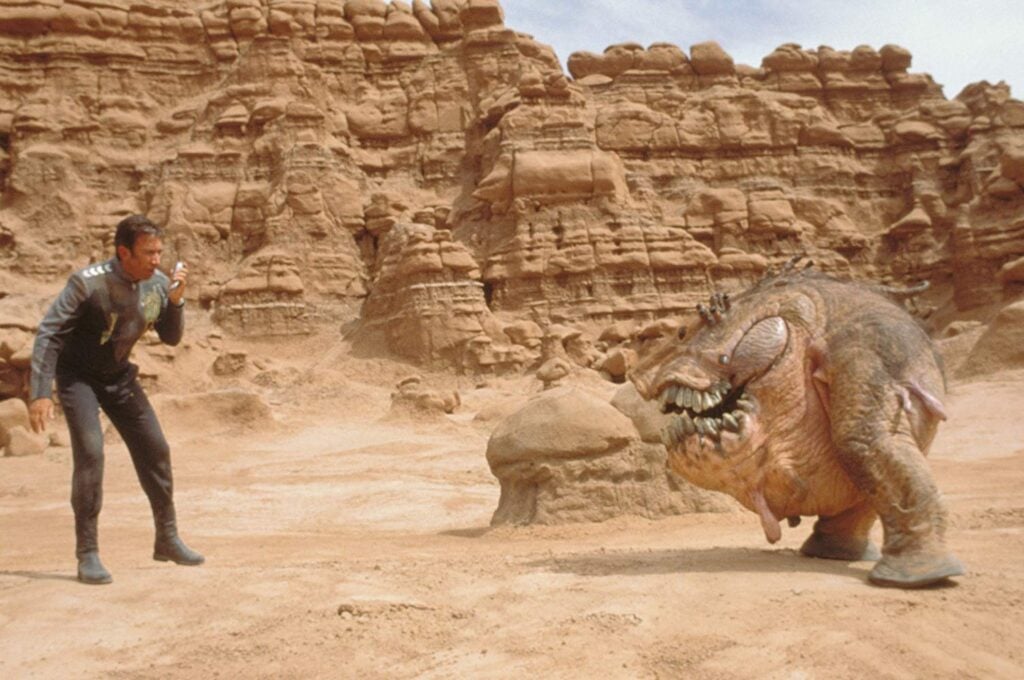 If you have the 2009 disk there is no reason other than a Steelbook case to upgrade. If you don’t already have it and are a sci fi fan then you can fix that either getting it at deep discount now or getting this re-release in a fabulous steel can at Best Buy, starting on November 5th.

It is absolutely shameful that they couldn't be bothered to do a new transfer.

Exactly. I didn't think the old blu was so hot; the film deserves better. There's still growing fandom regarding this film. There's even a full-length documentary coming out about GQ: https://www.youtube.com/watch?v=-sTXxAsaVg4&amp;feature=youtu.be&amp;fbclid=IwAR3ysipPxSfHT5RhpKT2Zsju14u-YTykuV147gwyyYIrJzNMHWFI-IEi_s0

Thanks for the review, Sam.. I have always enjoyed this film - - it's just fun, with a really good cast. Too bad there was no new transfer, but honestly I doubt I would have upgraded even if there was. I am fine with my current version.

Why hating on grain in the review? It is a film after all. I hate when a release is scrubbed of grain.

I saw this steel already at Best Buy a month ago - why does the reviewer show November 5?

I see no hate on the grain. You guys just love for nits to pick.

The Steelbook could have been a Best Buy exclusive. That happens sometimes with these special cases.

Scott Merryfield said:
The Steelbook could have been a Best Buy exclusive. That happens sometimes with these special cases.
Click to expand...

Is there precedent for Best Buy exclusive steelbooks eventually being offered by other retailers?

dpippel said:
Is there precedent for Best Buy exclusive steelbooks eventually being offered by other retailers?
Click to expand...

Not sure, as I do not buy Steelbooks. I know they've had exclusive titles in the past that would later be available at all retailers.

I really don't know whether it's an exclusive or not. Will look into it.

dpippel said:
Is there precedent for Best Buy exclusive steelbooks eventually being offered by other retailers?
Click to expand...

Sam Posten said:
I really don't know whether it's an exclusive or not. Will look into it.
Click to expand...

In Canada, this is a Sunrise Music exclusive.

Never even heard of them!

Sam Posten said:
Never even heard of them!
Click to expand...

Sunrise expanded to replace the loss of HMV, previously the biggest music and movie retailer in Canada.
S

Someday I would love to see a transfer (4K preferably) that mimics going from 1.85 to 2.35 as it did in the cinema.
Disney did it for Enchanted and Brother Bear.

SimonTC said:
Someday I would love to see a transfer (4K preferably) that mimics going from 1.85 to 2.35 as it did in the cinema.
Disney did it for Enchanted and Brother Bear.
Click to expand...

I never understood why they dropped the 1.85:1 parts for the video releases of this movie. Makes no sense to me!

Sam Posten said:
Never even heard of them!
Click to expand...

You know Canada is a separate country from the US, right?

It’s $10 at Amazon right now. I already have the blu ray and I’m not going to spend the $10 to get a tin.
You must log in or register to reply here. 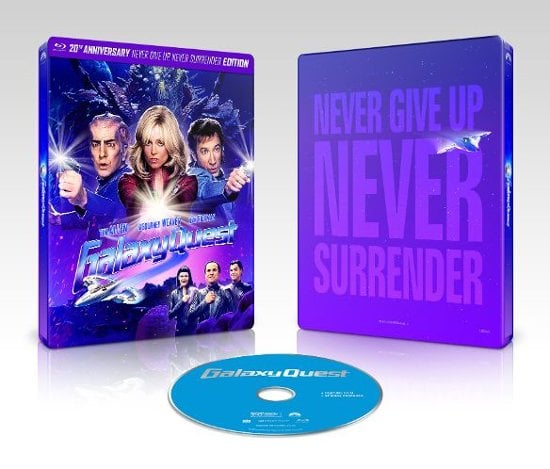