Forum List What's new Dark Style Change width
Log in Register
What's new Search
Menu
Log in
Register
Navigation
Install the app
More options
Dark Style
Close Menu
Posted on May 31, 2018 by Sam Posten
You are using an out of date browser. It may not display this or other websites correctly.
You should upgrade or use an alternative browser.
Best job I ever had! - Very highly recommended 5 Stars

David Ayer’s Fury is a colossal team effort that depicts the crew of the Sherman Tank “Fury” as it navigates World War II Germany just before the 3rd Reich’s final stand. Weary from years of war, Fury’s crew has hopped continents and countries, killing Germans in every theater. Their Wardaddy Don Collier (Brad Pitt) has promised them that if they do everything he tells them to do when he says it, he will get them through the war and home safely. He’s failed on that front already tho, losing his assistant driver as we pick up their tale. Their replacement comes in the form of Norman (Logan Lerman) a clerk typist pulled in to the position due to lack of trained alternatives. Norman’s initial inability to act when under fire earns him the ire of mates Swan (Shia LaBouef), Gordo (Michael Pena) and Travis (Jon Bernthal). Norman had better get with the program quickly or the fury within the crew might outweigh the dangers they face outside. 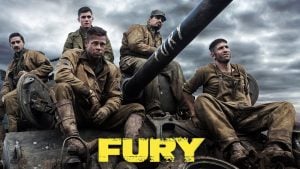 There’s a ton to like in this UHD upgrade for those of us who were already fans of the Bluray.  Higher quality audio and video of course, but add in over an hours worth of new extras and this package starts to look like a real winner.  Then you remember that the great quality Blu is packed in along with all of its great extras.  Plus you get a Movies Anywhere code to boot, and it’s still under $20.  That’s unbeatable value right there.

Certainly the sound detail is the crown jewel of Fury, and doubly so in Atmos.  But right behind it is the simpatico between Pena, LaBoeuf and Bernthal.  Their interactions with Norman really made this film bigger than just a one hit pony.  Pitt is solid as Wardaddy too, and he’s really the focus of the flick, but the camaraderie of the crew is what sold it for me.

The demonstration of tank squad tactics and how infantry would line up behind tanks for cover and mobility always struck me as mind blowing.  Fury gets high marks for smart details that it employs without going too far into the ridiculous realm.  Of course the final battle is more than a little unbelievable, but they never claim to be based on a true story.

Overall Fury is one of my top films ever and I am super glad to see it come out like a rockstar on this UHD release.

Dirty, gritty, grimy and dark.  And just about perfection.  While tank interiors are always a troublesome place to capture enough light, Fury nails it.  There’s just enough detail in the streaks of sun filtering in on faces, and the blackened surroundings are never swarmed with noise.  The best details in the film are shown in the closeups, with grease, mud, sweat and blood revealing the impact of war on the players.  The palette is subdued and cool throughout, with just a splash of HDR taking center stage during the raucous battles, especially in highlights of gunfire tracer rounds, rockets, and explosions.  Like The Patriot, I spied a few halos surrounding actors in medium shots where their bodies stood out from skies, but it’s not even remotely close to knocking it off a top score.

I loved Fury on Bluray, it was one of my favorite go-tos to show off my 5.1 rigs.  Now that I have a full 7.1.4 Fury is even more revealing, with explosions and gunfire no elevated into the upper rafters of the room.  The screams of Merlin engines overhead near the beginning let you know what’s up, literally, and it rarely lets up for the rest of the movie.  Tank against tank action in open orchards,  ripping up a town, and a 4 Shermans on 1 Tiger battle are all highlights, but the final showdown holding down a lonely crossroads is exceptionally satisfying Atmos showcases.  Amazingly the dialogue never suffers in all the action, as the shouts as the team works together can all be heard with crystal clarity.

I really dig Steven Price’s Soundtrack for the film too, and that filters in and out with the action to great effect.

Tons of new content here, and I’m still working my way through it:

Plus the Bluray is packed with even more:

Fury was a brilliant Bluray and it’s even more impressive today as a $20 catalog UHD release.  Packed to the gills with extras and featuring a brand new 4k transfer and all new Atmos encode, this is a disk every home theater enthusiast must pick up.   Very Highly Recommended 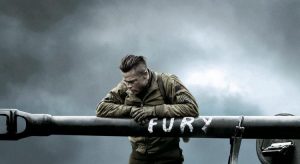 Bump for those who might have missed this getting posted late last night.

I guarantee you will dig it.
You must log in or register to reply here. 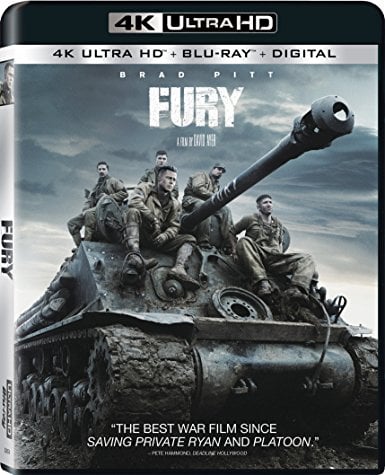