Forum List What's new Dark Style Change width
Log in Register
What's new Search
Menu
Log in
Register
Navigation
Install the app
More options
Dark Style
Close Menu
Posted on May 18, 2016 by Matt Hough
You are using an out of date browser. It may not display this or other websites correctly.
You should upgrade or use an alternative browser.
An outstanding, unheralded western 3.5 Stars

As a Fox contract player, Victor Mature appeared in every possible genre of film produced at the studio though westerns didn’t usually feature his most memorable appearances (John Ford’s My Darling Clementine as Doc Holliday being a notable exception), but Bruce Humberstone’s Fury at Furnace Creek is a first-rate western drama.

As a Fox contract player, Victor Mature appeared in every possible genre of film produced at the studio though westerns didn’t usually feature his most memorable appearances (John Ford’s My Darling Clementine as Doc Holliday being a notable exception), but Bruce Humberstone’s Fury at Furnace Creek is a first-rate western drama, and Mature gives a charismatic performance as a family black sheep trying for once to do his name proud. The film is chock full of other terrific things, too, making it one of those movies you’ve likely never heard of but definitely need to see.

When their father General Blackwell (Robert Warwick) is railroaded into a court martial by a greedy syndicate eager to exploit the Arizona territory of its riches in silver, unfriendly brothers Cash (Victor Mature) and Rufe (Glenn Langan) each come to the area incognito to learn the truth about their father’s involvement in an Indian massacre that wiped out Fort Furnace Creek and threw open the territory for settlements and exploitation. Cash, the brother who had never lived up to his father’s expectations for him, arrives first and is hired by syndicate boss Leverett (Albert Dekker) as a troubleshooter for the racketeers. He learns that the key player in the real story behind the massacre is the now drunken and weak Captain Walsh (Reginald Gardiner) whom the syndicate needs to eliminate to destroy the last person who could offer evidence against it. But Cash takes it on himself to act as Walsh’s protector, at least until he can pry the truth out of him. When former cavalry officer Rufe arrives, he mistrusts Cash’s motives and proves to be more hindrance than help to Cash’s plans.

Bruce Humberstone may have been one of Fox’s studio house directors, but he handles all of the major moments supplied in Charles G. Booth’s action-packed and character-filled screenplay with a great flair for the dramatic: the opening Indian siege on the Army fort is masterfully conceived, staged, and shot, and later scenes like Walsh’s very suspenseful cat-and-mouse dodge through shadowy town streets after dark while pursued by one of the syndicate’s hired thugs, a late story chase on horseback through the magnificent open territorial vistas, and the climactic shootout at the ruins of Fort Furnace Creek are all excellently sustained by the director. There’s comedy relief, too, in the person of affable Peaceful Jones (Charles Kemper), the town scalawag who, due to the lack of a town jail, is tethered to a huge, heavy tree stump which he modestly picks up and carries around when he’s tired of resting in one particular spot for too long. Booth’s screenplay has interesting sibling byplay that’s more thoughtfully crafted than usual in a western where brothers don’t get along, and he doesn’t make the mistake of undercutting the inherent suspense with frequent side trips to the local diner where attractive waitress Molly Baxter (Coleen Gray) dishes up fine food and a comely disposition.

Victor Mature gives a distinctive performance of a man with a purpose who uses his wits and charms rather than brute strength to get the information he needs to proceed with clearing his father’s name. Though second-billed, Coleen Gray is more window dressing than anything else as the major female presence in the movie. Much more vital to the proceedings are Reginald Gardiner who gives a versatile display of his talents first as a respected Army officer and later sliding into drink and dissipation due to the part he played in the sabotage of a man’s good name and Albert Dekker in another bad guy part, played as usual with finesse rather than brashness. Glenn Langan is rather wooden as Rufe, and Fred Clark has less to do than usual as one of the syndicate’s flunkies who gets sidelined fairly early in the movie. The wonderful Roy Roberts isn’t sidelined, however, playing the slimy syndicate second-in-command in decidedly oily fashion. As mentioned earlier, Charles Kemper brings a ray of sunshine to the otherwise dark deeds of the film’s plot while in a small part, Robert Warwick is the distinguished though disgraced General Blackwell.

The film’s 1.33:1 theatrical aspect ratio is faithfully delivered in this made-on-demand disc. You’ll notice quickly that the grain structure of the film is inconsistent with the early scenes of the fort massacre quite grainy (though not unenjoyable) while the remainder of the film is smoother and slicker in texture. Sharpness is usually very good, and the grayscale can boast some very deep black levels though occasionally blacks do get crushed in scenes with lower light levels. Contrast has been consistently applied to the image. There are dust specks here and there and one or two patches with distinctive spotting damage. Spotted shirts also occasionally cause flashing. The movie has been divided into chapters every ten minutes so this movie has 9 chapters.

The user will need to adjust the volume controls before playing the disc as they’re set much too high for a comfortable listening experience and will likely cause distortion or equipment damage if not adjusted. The Dolby Digital 2.0 mono mix is decoded by Dolby Prologic into the center channel. Dialogue is always easy to understand and has been mixed with David Raksin’s score and the atmospheric effects with surety. There is a bit of muffled hiss throughout the presentation, but other age-related artifacts like pops and crackle aren’t really a problem.

One of the most unheralded of westerns, Fury at Furnace Creek is well worth seeking out especially for those who enjoy the genre. The Fox made-on-demand disc offers a fairly pleasing account of this fine film.

Thanks for this review. You're right: this film is unheralded. I'm going to buy the disc.

Currently at Amazon, the original PRESSED DVD release of this title is cheaper to buy than the MOD.

Snatched it. Thanks.
D

Is the pressed release from a different (inferior) master? Is it the 2007 release?

It's probably derived from the same master. This MOD DVD came out in November, 2012. The 2007 DVD I have came out in May of that year. I'm going to watch that DVD now as I'm in the mood for a fine western that I haven't seen in some time.

I just got done watching the 2007 DVD release and I give the video presentation a 3.5 out of 5.0 rating. I always liked this film and revisiting it again this afternoon was a pleasure. Another thing, I wish Coleen Gray became a bigger star as she first caught my eye in Red River with John Wayne. An attractive actress that played in some good films with Mature.
You must log in or register to reply here. 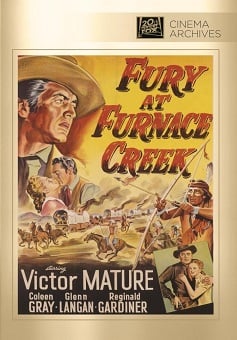