Forum List What's new Dark Style Change width
Log in Register
What's new Search
Menu
Log in
Register
Navigation
Install the app
More options
Dark Style
Close Menu
Posted on February 4, 2016 by Matt Hough
You are using an out of date browser. It may not display this or other websites correctly.
You should upgrade or use an alternative browser.
Melodrama at its tartest 3.5 Stars

Beautiful people living the high life while grappling for power, wealth, and position: this is the hallmark of the high-styled melodrama found in Mark Robson’s From the Terrace.

Beautiful people living the high life while grappling for power, wealth, and position: this is the hallmark of the high-styled melodrama found in Mark Robson’s From the Terrace. With an all-star cast (some not intelligently used, by the way) and an ultra-glossy production, From the Terrace offers a fair amount of entertainment value for the money but requires a strong stomach for the typical soap opera machinations which were titillating half a century ago but are not so much any more.

Returning from World War II, Alfred Eaton (Paul Newman) wants to make his own way in the world and not go to work in his father’s (Leon Ames) Philadelphia iron and steel works. After trying to get an aircraft business off the ground with best friend Alexander Porter (George Grizzard) and gradually squeezed out of that business enterprise, Alfred goes to work for a brokerage firm run by the strict, demanding James Duncan MacHardie (Felix Aylmer) who expects his field men to do his bidding at a moment’s notice and stay away on business trips for months at a time without taking their wives along, a situation which does not suit the spoiled Mary St. John Eaton (Joanne Woodward) at all. Before long, Eaton has amassed much wealth and a fashionable New York apartment but along the way has estranged his wife who’s having her own dalliances with various men, among them her former fiancé Dr. Jim Roper (Patrick O’Neal). When Alfred meets the sweet, genuine Natalie Benzinger (Ina Balin), the quiet, innocent, unsophisticated daughter of one of his clients, he realizes he’s trapped in a loveless marriage and with a boss that frowns on infidelity more than practically anything else.

Screenwriter Ernest Lehman has done what he can boiling down the massive soapy novel of John O’Hara into a script of fairly reasonable length (it’s at least a quarter hour too long), but he’s unable to eliminate the typical tropes of melodramatic narrative that date the film rather badly: climactic events that happen on the same day or at the same place (Alfred’s father dying on his wedding day, Alfred and Mary leaving the New York hotel at the precise moment when Natalie arrives in a taxi after the sweethearts have been apart for a year), bored, lonely wives turning to alcohol and sex to pass the time, a boss who abhors marital infidelity but doesn’t allow husbands to take wives along on lengthy business excursions. Because Lehman had to leave out great chunks of plot when a year or more passes between scenes, continuity seems strained especially in relationships where characters seem too arbitrary when they really aren’t (Mary showing no interest in Alfred at a dance and in the next scene (which is actually months later), she’s ending her engagement and devoting herself to him, Mary’s best friend Sage – Elizabeth Allen – advising her to have an affair even though Mary and Alfred seemed happy in the previous scene). Director Mark Robson had better material with Peyton Place which offered a slate of remarkable characters with a raft of extraordinary personal problems. Here, the people are money and power driven and seem much less dimensional and much less interesting. He continues to use the Cinemascope frame with interest placing characters on opposite sides of the screen or spread across the frame in interesting groupings, but the piece is talky with bottled emotions which only spew forth at extreme moments.

Paul Newman has a few moments of decisiveness during this almost two-and-a-half hours, but much of his emotional spectrum is internalized. The restraint is admirable for such high blown melodrama, but as he’s the focal point of the movie, a performance a little less passive would have been welcome. Joanne Woodward is a bit brittle as the neglected wife, but it’s a far more glamorous (and bitchy) role for her than the couple’s first pairing together in The Long Hot Summer or their comedic follow-up Rally ‘Round the Flag, Boys! Ina Balin won a Golden Globe as Most Promising Newcomer for her delicately handled role of Natalie Benzinger while her character’s polar opposite, the calculating Sage Rimmington, gets a solid portrayal by Elizabeth Allen. Myrna Loy, third-billed, has a couple of pitiable scenes as Alfred’s alcoholic mother in the early going, but she completely fades from view after the film’s first quarter hour. Leon Ames has a role of a bit more substance as Alfred’s cold, aloof father (his scene where he expresses his adoration of Alfred’s older, deceased brother is Ames’ most prominent career moment), and Felix Aylmer as Alfred’s father-figure in business is likewise cold and unflinching emotionally. Fine work is also turned in by George Grizzard as Alfred’s one-time best friend, Patrick O’Neal as Alfred’s rival for Mary’s affections, and Howard Caine as the brokerage weasel jealous of Newman’s favored position in the company.

The film’s Cinemascope aspect ratio of 2.35:1 is faithfully replicated in this 1080p transfer using the AVC codec. This is a gorgeous, spotless transfer filled with detail and without a hint of age-related dust or dirt, and with colorful hues rich and true without ever going overboard. Black levels are surprisingly excellent, and contrast has been handled consistently and with surety. The movie has been divided into 24 chapters.

The DTS-Master Audio 2.0 stereo sound mix retains the most welcome directionalized dialogue which makes these Cinemascope films such enjoyable listening experiences. Elmer Bernstein’s gorgeous themes get a nice spread in the mix without ever overpowering the dialogue, and atmospheric effects are professionally handled if sometimes just the least bit thin. No age-related audio problems like hiss or crackle present themselves at all.

Six-Page Booklet: contains a nice selection of black and white and color stills, original poster art on the back cover, and film historian Julie Kirgo’s complimentary essay on the movie.

For those who enjoy sudsy melodrama among the rich and famous, From the Terrace offers a first-class ticket. The Twilight Time Blu-ray is a gorgeous visual and auditory experience which fans will undoubtedly be glad to have. There are only 3,000 copies of this Blu-ray available. Those interested should go to www.twilighttimemovies.com or www.screenarchives.com to see if product is still in stock. Information about the movie can also be found via the Twilight Time website at www.twilighttimemovies.com or via Facebook at www.facebook.com/twilighttimemovies.

"From the Terrace" is one of those movies I enjoy watching from time to time, especially since Newman was extremely interesting, even in his introspection, at this point in his career. I think it compares favorably with "The Young Philadelphians" and both are quite good for Newman fans.

Bernstein's score is wonderful.
You must log in or register to reply here. 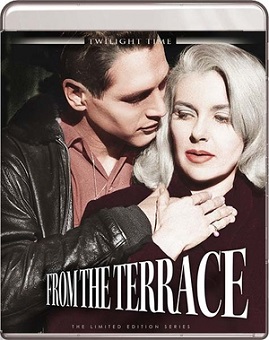