Posted on September 27, 2018 by Todd Erwin
This marks the fourth adaptation of the Mary Rodgers YA novel. 3.5 Stars

The Disney Channel does what they seem to do best with this latest adaptation of Freaky Friday, creating a film version of the stage musical that had a brief regional run across the US in 2016-2017.

If you grew up in the 1970s or early 2000s, then you are probably familiar with the premise of Freaky Friday. Based on the YA novel by Mary Rodgers, mother and teenage daughter are at odds with each other, and wind up switching bodies for 24 hours, learning a valuable lesson in the process – that the other’s life is more difficult than they thought. Disney has made this film four times now, in 1976 with Barbara Harris and Jodie Foster, in 1995 with Shelly Long and Gaby Hoffman (as a TV movie for ABC), in 2003 with Jamie Lee Curtis and Lindsay Lohan, and now a musical version with Heidi Blickenstaff and Cozi Zuehlsdorff. What, you’ve never heard of those last two actresses? Zuehlsdorff previously played the young Hazel Haskett in the two Dolphin’s Tale movies, and Blickenstaff is better known on stage and originated the role of the mother, Katherine Blake, when Disney premiered this musical version as a stage adaptation back in 2016 at the Signature Theater in Arlington, Virginia.

In this updated version, Katherine is a recently widowed mother of two who runs her own catering service from her home, and trying to put the finishing touches on her wedding to Mike (Alex Désert) the next day. Her daughter, Ellie (Zuehlsdorff), misses her father and would prefer spending the evening before the wedding at a scavenger hunt with her friends Monica (Jennifer Laporte) and Karl (Isaiah Lehtinen), and away from her younger brother Fletcher (Jason Maybaum) and future step-dad. When Katherine and Ellie have an argument, leading to the destruction of a magical hour-glass given to Ellie as a gift from her late father, their bodies become switched, and secrets come out, such as Ellie skipping classes and Katherine mortgaging the house and hoping that the press coverage she receives for catering her own wedding will bring in new clients. In the process, Katherine learns what it’s like to be a teenager in today’s world, while Ellie learns that being a self-employed mother isn’t as easy as she thought.

The musical numbers, written by Bridget Carpenter (Friday Night Lights, Parenthood) and Brian Yorkey (Next to Normal, If/Then), are catchy enough to keep the story from grinding to a halt for the most part, thanks to choreography by John Carrafa (Nashville, Empire) and direction by Steve Carr (which is a huge step up from Paul Blart: Mall Cop, Rebound, and Are We Done Yet?). Parents may take issue with at least one song, Parents Lie, but it may help to keep in mind that it is supposed to be Ellie singing from inside Katherine’s body. This version is not quite as whimsical as the 1976 or 2003 versions (I’ve never seen the 1995 version), being much more grounded and personal. Freaky Friday is a entertaining, musical-filled 90 minutes suitable for the entire family.

Freaky Friday was originally broadcast on Disney Channel in 720p, and this 480p downconversion looks pretty good, especially when upscaled to 2160p on my Sony UBP-X800 UHD Blu-ray player. Obviously, there is going to be an overall softness to the picture, although close-ups do reveal facial features (such as light freckles on Ellie’s face) and fabric textures on costumes. Colors are well-saturated for a DVD release, without any noticeable compression issues or artifacts.

The Dolby Digital 5.1 soundtrack (encoded at 384 kbps) is suitable for its musical origins, placing dialogue in the center channel and spreading the music across the front stage and to the rears, occasionally sending instruments to discrete speakers. Otherwise, this is a fairly standard TV mix.

Bonus Track – Not Myself Today (480p; 1:48): A very short musical number cut from the finished film.

This new musical adaptation of Freaky Friday is enjoyable, with good performances and the presentation on DVD is above average. The disc is fairly lacking in extras, as I would have liked to see some behind the scenes or at least a history of the franchise. 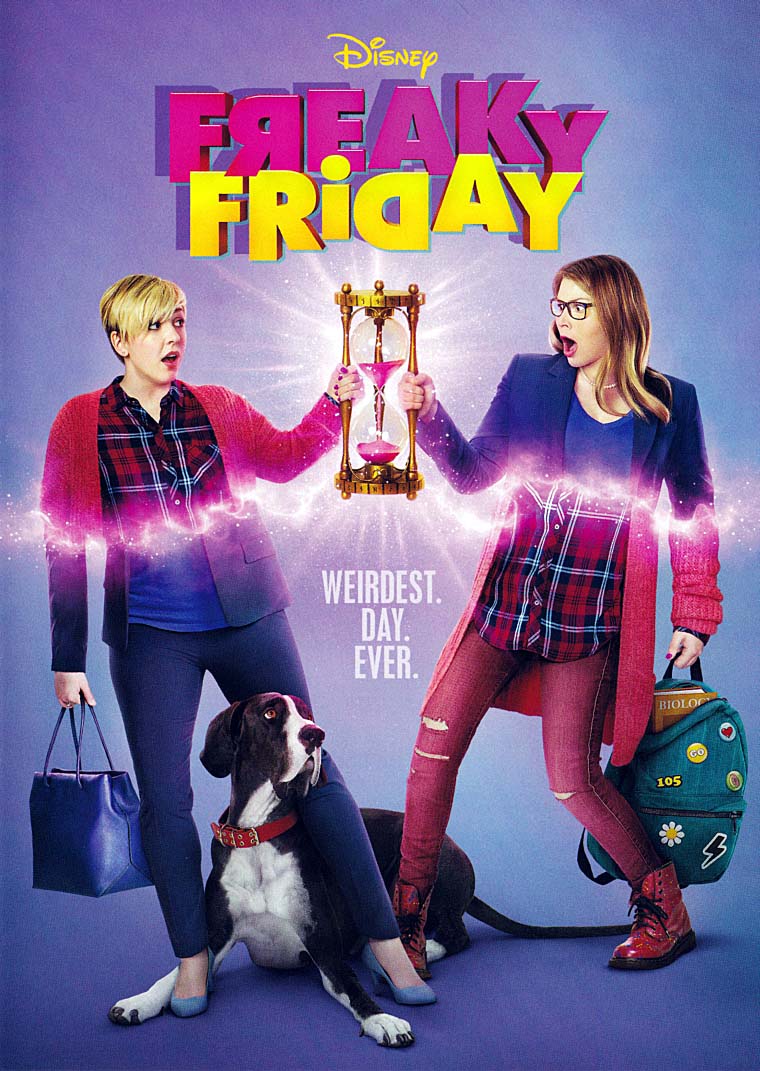