Forum List What's new Dark Style Change width
Log in Register
What's new Search
Menu
Log in
Register
Navigation
Install the app
More options
Dark Style
Close Menu
Posted on February 17, 2021 by Todd Erwin
You are using an out of date browser. It may not display this or other websites correctly.
You should upgrade or use an alternative browser.
A missed opportunity 3.5 Stars

Co-writer/director Christopher Landon’s Freaky tries to blend the body-swapping comedy genre with horror with mixed results. On the plus side, Universal’s presentation of the film on Blu-ray is very good.

The body-swapping genre has been around for a long time, milking the comedic possibilities of a child swapping with a parent (the numerous iterations of Freaky Friday by Disney) or with a member of the opposite sex (Blake Edwards’ Switch from 1991). Director Christopher Landon had some success in blending comedy and horror with his two installments of the Happy Death Day franchise (yet failed rather miserably with his second feature Scouts Guide to the Zombie Apocalypse), so his attempt to mix the body-swapping genre with the serial killer/slasher genres probably looked good on paper, but Freaky sputters on the screen with an unevenness that put this reviewer off.

Millie (Kathryn Newton) is a quiet, shy teenager struggling to get through high school with her two best friends, Josh (Misha Osherovich) and Nyla (Celeste O’Connor) after her father’s sudden passing. That even has hit the family hard, with Millie’s older sister Charlene (Dana Drori) focusing on her job as a sheriff deputy and her mother (Katie Finneran) working retail and drowning her sadness in alcohol. The small town is under siege by a serial killer known as The Butcher (Vince Vaughn), who returns every year to murder teens during Homecoming. One night, while waiting for her comatose mother to pick her up after a sporting event on… Friday the 13th, Millie comes face to face with the Butcher, who stabs her with dagger that supposedly has supernatural qualities. Millie is rescued by her sister, but the Butcher escapes. The next morning, the two awake to find that they somehow have switched bodies, and Millie (trapped in the Butcher’s body) has until midnight to retrieve the dagger from the police evidence locker and stab the Butcher (in Millie’s body) in hopes of getting her body back or be lost forever. To complicate matters, the sheriff’s department now has an eyewitness sketch of the Butcher, making it difficult for Millie to get around town, having to enlist the help of Josh and Nyla.

Kathryn Newton and Vince Vaughn are very good here, rising above the material as best they can. The problem is the same I had with Landon’s Scouts Guide to the Zombie Apocalypse. The gore is too over the top (such as a victim getting her head smashed by a toilet seat in full closeup or another victim being sliced in half longwise by a table saw), then tries to switch gears to comedy almost instantaneously. It too often felt like Langdon was going for the gore just for the sake of gore, as if the restraints placed on him for the Happy Death Day movies were removed again for Freaky.

Universal’s 1080p AVC-encoded transfer for Freaky continues in the studio’s tradition of stellar Blu-ray releases. The film is properly framed in its 2.39:1 theatrical aspect ratio, providing well-saturated colors and excellent fine detail like beard stubble and fabric textures. Black levels are also excellent, providing strong shadow details in the darkest of scenes. There are a few very minor instances of noise here and there, but nothing to be overly concerned about.

The DTS-HD MA 5.1 track is about as immersive as a 5.1 track will allow. The front stage is wide with good surround and LFE presence, heightening many of the film’s thrills. Dialogue is clear and understandable throughout.

Deleted Scenes (1080p; 5:27): Three scenes are included – The Butcher Lends a Hand, Charlene Hears a Rumor, and Late for the Party.

Split Personalities: Millie vs The Butcher (1080p; 2:24): A look at the film’s two leads, Vince Vaughn and Kathryn Newton.

Final Girl Reframed (1080p; 2:48): A look at the character of Millie and how she different from the stereotypical “final girl.”

Audio Commentary with Co-Writer/Director Christopher Landon: Landon discusses his process and the production of the film.

Digital Copy: An insert contains a code to redeem a digital copy on Movies Anywhere, plus a rewards code on the reverse to redeem at Universal All-Access Rewards for points that can be redeemed towards a free digital movie.

Co-writer/director Christopher Landon’s Freaky tries to blend the body-swapping comedy genre with horror with mixed results. On the plus side, Universal’s presentation of the film on Blu-ray is very good.

I thought this movie was hysterically funny and wasn’t really put off by the violence you mention. He is, after all, a serial killer...

Vince Vaughn and Kathryn Newton were fantastic.
You must log in or register to reply here. 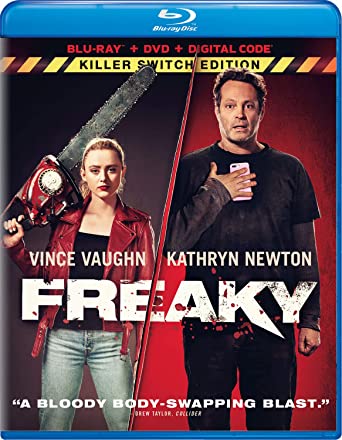