Forum List What's new Dark Style Change width
Log in Register
What's new Search
Menu
Log in
Register
Navigation
Install the app
More options
Dark Style
Close Menu
Posted on March 24, 2016 by Todd Erwin
You are using an out of date browser. It may not display this or other websites correctly.
You should upgrade or use an alternative browser.

The brainchild of actor/writer Paul Feig, Freaks and Geeks was one of the most critically acclaimed shows to debut on network television in 1999. It was also one of the lowest rated shows to debut that season, despite a loyal fanbase that tried to keep it on the air even after it was cancelled.

So the story goes, in 1999 Judd Apatow had signed a deal with DreamWorks Television to develop shows the studio could sell to the various networks, and his good friend Paul Feig sent him a spec script for a dramedy series set at a MidWest high school in the early 1980s. Apatow loved the script, sent it to the executives at DreamWorks, who also loved it, and then sent it to NBC, which was in the process of finding a new President. It was this Perfect Storm that allowed Freaks and Geeks to debut as part of the 1999-2000 television season on the peacock network.

Lindsay Weir (Linda Cardellini) and her younger brother Sam (John Francis Daley) attend William McKinley High School in Chippewa. Michigan. Lindsay is one of the smartest in her class, but after her grandmother passed away, things haven’t been quite the same, finding herself searching for new friends to connect with. She finds a group of burnouts known as Freaks, including Daniel (James Franco), his on-again off-again girlfriend Kim (Busy Philipps), would-be drummer Nick (Jason Segel), and class clown Ken (Seth Rogen). The Freaks welcome Lindsay into their group, enticing her to throw a kegger at her house while her parents are away (only to have little brother Sam and his Geek friends Neal (Samm Levine) and Bill (Martin Starr) replace the real keg of beer with non-alcoholic), invite her on a ride of mayhem through the town on Halloween (egging her brother Sam in the process), and ditch class for various other adventures. Sam has been friends with Neal and Bill forever, and they, too, go on a journey of self discovery, dealing with fears of showering after gym class, dating a cheerleader, always getting chosen last for the team in school, and having your single mother date one of your teachers. What really set Freaks and Geeks apart from other teen-centric shows that came before it was the honesty in how the characters were portrayed and that they weren’t the story of the jock and the cheerleader (something the pilot quickly dismisses in its opening scene as the camera sweeps past said jock and cheerleader professing their love for one another and down into the bowels of the outdoor bleachers to eavesdrop on the Freaks, then segueing to the Geeks about to be attacked by one of the school bullies). The series dealt with real issues that many of us could easily relate to, such as Sam’s crush on a cheerleader only to find out the two of them have nothing in common, Lindsay trying marijuana for the first time and not liking it, Kim dealing with having to live in a broken home, Ken falling in love with a girl born with ambiguous genitalia, Nick having his dreams crushed, Neal learning his father is having an affair. And that may have been the show’s eventual downfall with mainstream audiences looking for escapism, with the outcome for the main characters at the end of each episode surviving with some dignity, but not necessarily a happy ending.

Freaks and Geeks won a well-deserved Emmy for Outstanding Casting for a Comedy Series, not just for its main set of young characters, but also Joe Flaherty as Sam and Lindsay’s father, Harold Weir; Becky Ann Baker as their stay at home mother, Jean; Dave “Gruger” Allen as the cool hippy Guidance Counselor Jeff Rosso; Thomas F. Wilson as Coach Ben Fredricks; Kevin Tighe as Nick’s father; Claudia Christian as Bill’s single mother (and former stripper); and even Mystery Science Theater 3000 veterans Trace Beaulieu as science teacher Mr. Lacovara and Joel Hodgson as the disco clothing store salesman and disc jockey. The series even managed to receive an Emmy nomination two years later in the category of Outstanding Writing for a Comedy Series for the series finale Discos and Dragons after it finally aired on Fox Family in 2001. Freaks and Geeks is also where many of its young talent, both in front of and behind the camera got their start. The series made stars out of James Franco (Spider-Man, The Interview, This Is the End), Seth Rogen (The Interview, Knocked Up, This Is the End), Linda Cardellini (ER, Scooby Doo, Avengers: Age of Ultron), Jason Segel (The Muppets, How I Met Your Mother, Forgetting Sarah Marshall), John Francis Daley (Bones, directed Vacation (2015), wrote Horrible Bosses), Martin Starr (Silicon Valley), Samm Levine (Wet Hot American Summer, Not Another Teen Movie), and Busy Philipps (ER, Cougar Town). Show creator Paul Feig has gone on to direct Bridesmaids, The Heat, Spy, and the upcoming remake/reboot of Ghostbusters. Judd Apatow has directed many of his Freaks and Geeks stars in The 40-Year-Old Virgin and Knocked Up. Frequent episode director and series consulting producer Jake Kasdan directed the features Orange County, Walk Hard: The Dewey Cox Story, and more recently Sex Tape.

It is rare for a series that only ran for one season (barely) to find its way onto DVD, especially a series like Freaks and Geeks that used popular music from the time period in which it was set, often making getting and affording clearances for those songs almost cost prohibitive. It was the fans devotion to the series and Shout! Factory (which was just coming into its own) that first brought Freaks and Geeks to DVD completely intact plus loads of bonus materials back in 2004, rescuing the show from disappearing into the void of forgotten shows. Shout! Factory has upped the ante yet again by bringing the series to Blu-ray in a Star Trek: TNG style restoration, now for the first time in 1080p.

Freaks and Geeks was produced at a time when networks only aired certain shows in high definition, so the series was shot in 35mm, but post production was completed on standard definition video tape in the 4:3 aspect ratio. When this set was first announced last year, it was feared that the episodes would simply be upconverted from their broadcast masters to 1080p. This is not the case. According to the liner notes, the original camera negatives were scanned at 4k, re-edited and color-timed cut for cut based on the broadcast masters under the supervision of the series’ Director of Photography Russ T. Alsobrook, and then approved by series creator Paul Feig. Shout! Factory has included the series in both its original 4:3 broadcast aspect ratio as well as new “enhanced” widescreen versions. With the exception of the Pilot episode (the widescreen version contains a disclaimer), which was filmed in 4:3, the rest of the series was filmed full aperture, allowing for additional space on the left and right sides of the frame for the widescreen versions. When comparing the 4:3 to the 16:9 versions, the original broadcasts sometimes appear somewhat claustrophobic while the widescreen seem to have a bit more breathing room. Nothing is really gained or lost in either version, except for the Pilot, where the widescreen appears very obviously cropped top and bottom, with some occasional tops of heads getting cut off and an increase of grain since the image was blown up slightly to fill the width of your screen. (NOTE: The images below are to illustrate the composition of the two aspect ratios, and are not indicative of actual video quality). 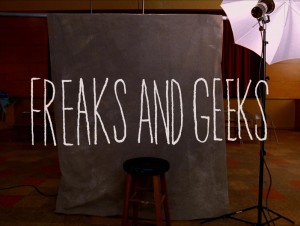 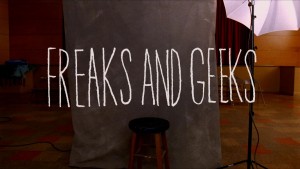 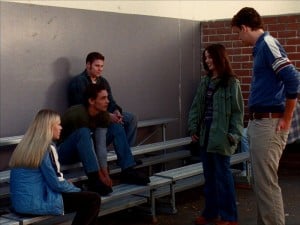 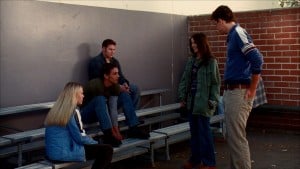 That all being said, the results are likely to make any fan jump for joy. Colors are somewhat muted, which is attributed more to the look of the show. Detail is often excellent, revealing fabric textures in the period clothing and graffiti on the school lockers. Dirt and scratches are rarely, if ever, in attendance on any of the episodes, as well as compression artifacts. And this is after viewing on an LG 65UH8500 UHD TV.

Shout! Factory has provided both 5.1 and 2.0 stereo mixes of the show in DTS-HD Master Audio. Both sound nearly identical, since the show originally aired in stereo, and like most dramatic comedies the mix is typically very front-heavy. Dialogue is always clear and understandable, directed to the center channel. Music and effects are spread through all 5 channels with minimal LFE support. My only complaint is that the 1980s songs featured throughout the series, including the title theme Bad Reputation by Joan Jett, are mixed much louder than the rest of the show.

The good news for owners of the previous DVD edition is that all of the bonus features have been ported over (including a digital download of the Yearbook from the Yearbook Limited Edition). The even better news is the inclusion of a new interview segment with Judd Apatow and Paul Feig. The set consists of nine discs in total, four discs each for the 4:3 and 16:9 editions (containing identical bonus features), and one disc of additional bonus features.

Special Features Disc:
In Conversation with Paul Feig and Judd Apatow (1080p; 45:59): The sole new bonus feature on this set. Los Angeles Times critic Robert Lloyd moderates this interview with Apatow and Feig as they discuss how the series was greenlit by NBC, the casting process, and the legacy of the series.

Museum of Television & Radio William S.Paley Festival Q&A (480i; 73:06): The cast and crew answer questions from a moderator and the audience after a screening of an episode at the museum.

Digital Yearbook: A URL is provided to download a PDF version of the Yearbook and an unfilmed script.

Fans of the series will be delighted to upgrade their DVD edition to Blu-ray with improved picture and sound, and not worry about losing any of the special features, plus a new interview with the two of the creative forces behind the show. Recommended.

Nothing But the Blues

Thanks for this great review! What a wonderful show. So well written & performed! In a perfect world, it would have received a 2 season.

Very happy to read your AQ and PQ assessments. On other places, I read comments by many who were upset the 16x9 versions were even made available because it was not the original release aspect, but both are available. I think the "claustrophobic" mention is an accurate way to describe it. Seeing it in HD and in the widescreen format may be even better than all those wonderful special features they still carried over!! Shout does another one very well. Buying this right away.
You must log in or register to reply here.