Not your typical Jackie Chan 4 Stars

The Foreigner is something of a departure for Jackie Chan, a far more serious political thriller than his fans have expected from him in the past. And that’s not necessarily a bad thing.

When terrorists bomb a London bank, customers at the dress shop next door become collateral casualties, including the daughter of Chinese Restaurant owner Quan Ngoc Minh (Jackie Chan). When it is discovered that a radical offshoot of the IRA has claimed responsibility, Quan confronts Irish Deputy Minister Liam Hennessy (Pierce Brosnan), requesting the names of those responsible for the bombing, as his daughter was the only family he had left. Hennessy truthfully claims that he doesn’t know who is responsible, but an investigation is under way. Quan doesn’t believe him, and begins to pressure Hennessy by planting non-lethal bombs and stalking him at all hours. Hennessy still has ties to the IRA, and calls in guards to protect him and fend off Quan, all the while uncovering a conspiracy and double-crosses in his midst.

The Foreigner is something of a departure for Jackie Chan, a far more serious political thriller than his fans have expected from him in the past. And that’s not necessarily a bad thing, as Director Martin Campbell (Goldeneye) keeps the film moving at a brisk pace, despite many of the political machinations occasionally bogging the film down (especially for those not familiar with British/Irish politics). This is a much darker film than we are used to seeing Jackie Chan in, and the quietness and secretive background of his character work well with his acting style. Although there are no Buster Keaton-esque stunt set pieces in the film, Chan does get to perform his usual fighting techniques with a hint of UFC moves thrown in for good measure. Brosnan is in top form as a politician with a known dark past that is quickly catching up to him. The Foreigner is not a great movie, but its not a bad one, either.

While not a reference-level presentation, The Foreigner still delivers a solid picture on Blu-ray. Fine detail is very good, showing the scars and wrinkles on the two aged stars of the film nicely. Black levels are decent with acceptable shadow detail and minimal crushing. Colors are often muted somewhat, but appear natural. Compression artifacts and other noise are kept at a minimum.

For a DTS-HD MA 7.1 track, the mix is relatively front-heavy with a ho-hum LFE channel. That being said, dialogue is never an issue, although the Irish accents are sometimes a bit too thick for us Americans to clearly understand. The pulsing score by Cliff Martinez (Drive, The Neon Demon) benefits the most from the 7.1 mix, immersing the viewer in his musical stylings.

Interviews (1080p; 28:00): EPK-style interviews with Martin Campbell, Jackie Chan, and Pierce Brosnan, with title cards indicating the question being asked. Back in the old days of television news and local entertainment news programs, this was how entertainment reporters in smaller markets would get their interviews with celebrities.

DVD Copy: The film in 480p and Dolby Digital 5.1 English and 2.0 DVS with allof the same special features listed above. Personally, I’d rather have a digital copy than a DVD.

The Foreigner may be a turning point for Jackie Chan’s long career, with possibly more dramatic roles down the road. Presentation is slightly above average for 1080p Blu-ray, but bonus materials are rather anemic.

It’s not a movie I would have normally seen in the theater, but MoviePass made me go and I’m glad I did. It was thoroughly enjoyable and completely different from the usual Jackie Chan movie. There is enough substance to merit multiple viewings even if you’re not a fan of Chan or Brosnan. I can recommend a rental. I will probaby buy it when it drops to the $10 range.
You must log in or register to reply here.
Share:
Facebook Twitter Reddit Pinterest Tumblr WhatsApp Email Link 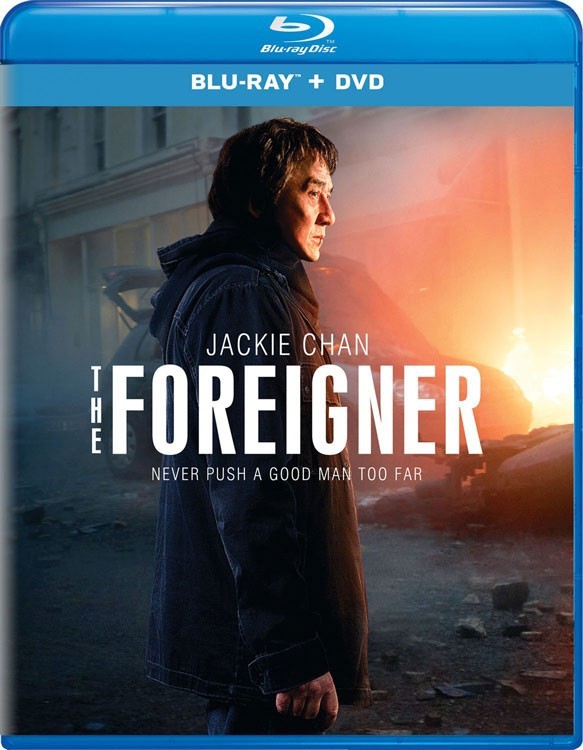