A somewhat different view of World War II through air support during the siege of Guadalcanal in the Pacific, Nicholas Ray’s Flying Leathernecks mixes actual fight footage with staged battle scenes to often exhilarating effect. While the screenplay doesn’t quite give the grunts their due, the film is bolstered by its unique perspective of the war and some able performances from stars Robert Ryan and John Wayne along with solid work from a cadre of reliable supporting players.

When the marine flying unit VMF-247 gets a new squadron leader in Major Daniel Kirby (John Wayne), they’re somewhat disappointed that the brass hadn’t promoted from within and given the command to their favorite Captain Carl ‘Griff’ Griffin (Robert Ryan). Nevertheless, Kirby and Griffin make a concerted effort to work together smoothly for the good of the outfit even though their leadership techniques differ wildly: Kirby being the stern taskmaster and Griffin being the gentler and more understanding officer. Command has decided to experiment with letting the flying squadron provide close air support to ground troops at Guadalcanal though the squad is hampered by a lack of parts, gasoline, and backup pilots to spell men who are completely exhausted and not at their sharpest in the air. With heavy Japanese barrages from their own planes, their ground soldiers, and in the ocean, there are plenty of casualties, but the men buck up to Kirby’s strict rules and perform admirably.

James Edward Grant has scripted the Kenneth Gamet story that is pretty bankrupt in character exploration for the many lower ranked soldiers and pilots that people the story: when some of them meet their maker, the emotional impact is dissipated because we hadn’t been given enough time to get to know them (a series of brief vignettes as the men cable their loved ones back home doesn’t quite suffice for background on the men). Ryan’s and Wayne’s characters are shown in more depth definitely contrasting their individual approaches to command (a hoped-for brawl between the two big men gets sidetracked midway through the movie, disappointingly). The actual World War II aerial footage used throughout stitches together into intriguing dogfights (abetted, of course, with inserted footage of the stars in their soundstage flying machines) though the Japanese kamikaze flyers seem to be the more accurate shooters through much of the movie sending our boys to their doom. Director Nicholas Ray does a most professional job directing the narrative, but it’s lacking the in-depth exploration of character and gut-wrenching drama that distinguished such films of his as In a Lonely Place and Rebel Without a Cause. A stateside visit with Kirby’s wife and child comes out of nowhere and stalls the movie’s forward momentum, but we are given one lengthy, impressive seaside strike on the Japanese navy and a climactic all-out attack on land that brings the movie to a notable end.

Ordinarily, it would have been Robert Ryan acting the tough, steely commander with a heart of brass, but with that larger role going to John Wayne, we get to see a tenderer side of Ryan in the movie, and it’s appealing. His is the most interesting performance in the movie coming to understand the benefits of occasionally turning off one’s emotions for the greater good of the squad. Of the supporting players, two stand out. Don Taylor plays Lieutenant Vern “Cowboy” Blithe, Griff’s brother-in-law with an ease and affability that he wasn’t always known for. Jay C. Flippen as Master Sergeant Clancy, the line chief who can come up with just about anything anyone needs given time and opportunity, is a tried-and-true wartime character no less effective here despite its familiarity. Janis Carter has the throwaway role of Kirby’s loyal wife, very pretty and very tidy in her playing even in such a thankless role. William Harrigan plays the base doctor while Maurice Jara, Adam Williams, James Dobson, Steve Flagg, and Brett King make up brave members of the squadron, some of whom don’t make it to the end of the movie.

The film’s 1.37:1 theatrical aspect ratio is faithfully delivered in a 1080p transfer using the AVC codec. Gorgeous Technicolor has been reproduced beautifully in this transfer with realistic skin tones, impressively deep black levels, and perfectly applied contrast. The vintage World War II flying footage, of course, is grainier and less superbly focused, but that’s no fault of the transfer. There might be the slightest variance in color saturation levels in a scene or two near the film’s end, but it’s pretty incidental.

The DTS-HD Master Audio 2.0 mono sound mix offers solid fidelity for this era in sound reproduction. All of the dialogue has been recorded excellently, and it has been mixed professionally with Roy Webb’s background music and the numerous sound effects necessary for a realistic depiction of World War II combat in the air and on the ground. There are no instances of age-related hiss, crackle, flutter, or pops.

Nicholas Ray’s Flying Leathernecks is an enjoyable and engrossing war film featuring some engaging color footage of aerial combat of that era and two superb leading men at the apex of their careers. The Warner Archive Blu-ray release provides astounding color reproduction and solid mono sound for fans of the stars or the film.

This new master is also showing on HBO Max and I was similarly impressed with how great it looks. I also wholeheartedly agree that Ryan delivers the most engaging and interesting performance in the film.
Reactions: Matt Hough

Thank you for your review. I like the movie more than you do as I long ago accepted the focus of the movie was always about the two different leadership styles between the two main characters and not about character development for the supporting actors. By the way, I did feel the pain of death with a couple of those supporting characters. In the end, one of those main characters finally accepts what the other was trying to teach him in regard to leading men into battle. I look forward to watching my BD after last month watching that beautiful video presentation on HBO Max.
Reactions: PMF and Yeoman007

Great, I ordered this today. I do love fifties war movies, esp. those set in the Pacific (& starring the Duke doesn't hurt). This can join The Naked & The Dead, & hopefully it won't be too long before we get, Up Periscope & Operation Pacific (I do like it although I do feel that it has a B feature vibe about it).
Reactions: lark144 and Yeoman007

Never saw this until BD.

It's a decent movie but the ending strikes me as weird:


From the start, we know Leathernecks will lead toward a finale in which Griffin and Kirby warm up to each other, so when that happens, it feels inevitable.
Oddly, Leathernecks predicates their connection on a decision Griffin makes that seems questionable. Throughout the film, we get the impression Griffin can’t make tough choices that might lead to the death of his Marines, and in the climax, he finally buckles down.
However, the film leaves open the question of whether Griffin chose wisely. In a more standard story, he’d Do the Right Thing without a doubt, but here we feel uncertain.

In theory, this adds complexity to the story, but in reality, it just seems weird. The flick’s last scene shows Kirby and Griffin all buddy-buddy, without a hint of remorse, and that comes across as an odd contrast to the predicament involved.
You must log in or register to reply here.
Share:
Facebook Twitter Reddit Pinterest Tumblr WhatsApp Email Link 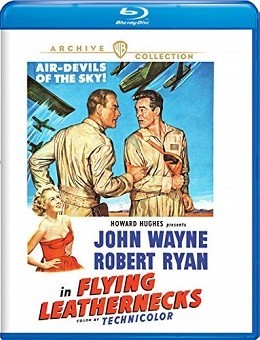