Forum List What's new Dark Style Change width
Log in Register
What's new Search
Menu
Log in
Register
Navigation
Install the app
More options
Dark Style
Close Menu
Posted on April 17, 2019 by Todd Erwin
You are using an out of date browser. It may not display this or other websites correctly.
You should upgrade or use an alternative browser.
Disappointing restoration effort 3 Stars

Germany’s first 70mm production, Flying Clipper (released as Mediterranean Holiday in the US), has been “restored”  by the Busch Media Group and made available in the US by Flicker Alley in a 4K UHD Blu-ray/Blu-ray combo pack.

In the late 1950s and early 1960s, many companies produced large-format widescreen travelogue features, the most famous being those produced by Cinerama. In 1962, Directors Hermann Leitner and Rudolf Nussgruber made Germany’s first 70mm production, Flying Clipper, which would follow the adventures of a Swedish sailing ship of the same name and its crew as they embark on a voyage through the Mediterranean. The crew makes stops in Portugal, Egypt (to the great pyramids), Turkey, Greece, Italy, Monaco, and Spain. There is close to 2 ½ hours of beautiful scenery on display, with Burl Ives narrating and singing us through this adventure in the US version. Flying Clipper drags in many spots despite its gorgeous scenery and Burl Ives rather lively narration.

Flying Clipper was not properly stored throughout its 56 year history, with nearly all of its 70mm prints having severely faded color. New 70mm prints were created in 2000 for a German 70mm retrospective, and that is the print supposedly used here, scanned in 4K at Fotokem in London and then color corrected in Germany. This set contains the “restored” film on both Blu-ray and 4K UHD Blu-ray (with HDR10). Viewing both formats, this reviewer wishes the results were actually somewhere in between the two. The 4K UHD version is often too bright and colors too vivid, as if a novice applied the high dynamic range to this film. The Blu-ray is almost a polar opposite, with a much darker image and washed out colors. The UHD appears much sharper, but I’m not sure if that is due to the brighter image overall or the increased resolution. The print on both versions does show some signs of wear, with noticeable negative and positive dirt, minor scratches, blotches, and even a few splices.

The 4K UHD Blu-ray has quite a few options to choose from, each one sounding a bit different. There is the “original” German mix in DTS-HD HR 5.1, a German DTS-HD HR 7.1, German Dolby Atmos, English DTS-HD HR 5.1 and 7.1, English Dolby Atmos, plus French, Spanish, Portuguese and a few others in Dolby Digital 2.0. The German 5.1 is more like a 5.0 track and has the best fidelity of them all. The German 7.1 adds a bit more depth and LFE, while the German Atmos is more spacious and immersive, but many of those sounds were not in the original mix (as is noted in the Audio Restoration featurette). The English 5.1 claims to be based on the original theatrical mix (created by Cinerama), with the 7.1 widening the front soundstage slightly. Like the German Atmos mix, the English is a bit more immersive, but again many of those sounds were not in the original mix and were added for this release.

All of the Special Features can be found on either disc.

Lobby Cards Slide Show (1080p; 3:25): German lobby cards for Flying Clipper with no option to skip through each slide.

Jürgen Brückner Interview (1080p; 30:43): The camera operator, distributor and film chronicler sheds light on the production of Flying Clipper and shooting in 70mm. In German with optional English subtitles.

Marcus Vetter Interview (1080p; 14:41): A film projectionist guides us through the process of screening 70mm. In German with optional English subtitles.

Film Restoration (1080p; 3:33): A split screen before and after of the restoration of the German theatrical trailer.

Booklet: A miniature reproduction of the program booklet for Mediterranean Holiday (the US title of Flying Clipper).

I found Flying Clipper to be a dull, rather lifeless travelogue despite the beautiful scenery, and found the restoration efforts to be rather disappointing. This title has been available as a German import for over a year, and this appears to be the same exact disc, as there is no mention in the video content on either disc of the US distributor Flicker Alley. 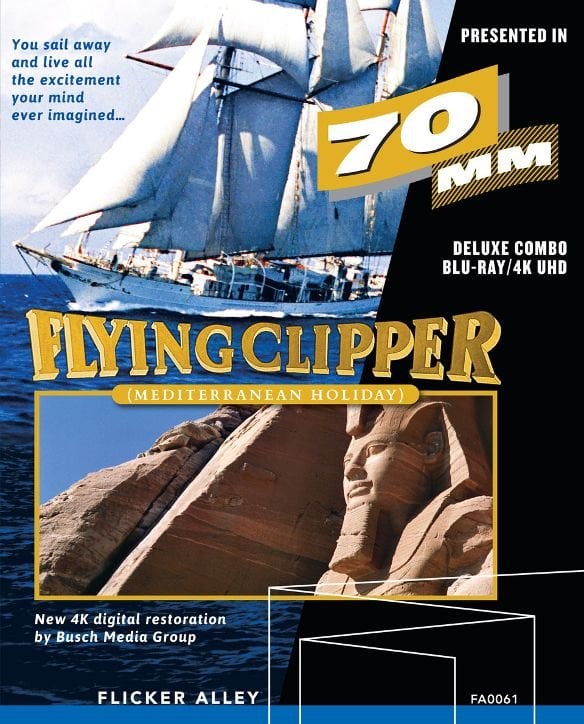