Many forget that IMAX was best known for its beautiful documentary short subjects. Flight of the Butterflies was like a trip down memory lane, meshing beautiful cinematography with two compelling stories told simultaneously. The 4K UHD looks incredible, but the real bonus is the inclusion of a 3-D Blu-ray version.

Flight of the Butterflies tells two stories: One follows the personal journeys of three generations of Monarch butterflies, the second the scientific discovery in 1975 by Dr. Fred Urquhart of the multi-generational migration paths of these butterflies from Texas to Toronto to Michoacan, Mexico. The film, produced for IMAX and IMAX 3-D cinemas, blends re-enactments of Dr. Urquhart’s research (including finding a way to successfully tag butterflies in the wild in order to track them) with incredible cinematography of the butterflies in their natural habitat in the wild. This includes macro photography of a female Monarch laying an egg on a leaf of milkweed, the caterpillar emerging from the egg, and maturing into a chrysalis and eventually a full-fledged butterfly. The chrysalis stage even includes a time-lapse MRI of the caterpillar metamorphosing into a butterfly, detailing the changes in internal organ structures. The film is both educational and entertaining, thanks to the compelling story line of Dr. Urquhart’s own journey and the low-key performances of the actors who portray those involved.

Flight of the Butterflies was filmed with IMAX 15/70 3D, IMAX Phantom 4K digital, RED Epic 5.6k digital, and Nikon D3X cameras, and completed as an IMAX 4K digital intermediate. When selecting the film on the 4K UHD disc, the viewer has the option of watching the film with or without High Dynamic Range. Regardless of which version you choose, the experience will be breathtaking. Colors are vibrant but never oversaturated, detail is exquisite (down to the hairs and scales on the butterflies), and contrast provides deep blacks and bright whites without any noticeable crush or blooming. This makes for a great demo disc for just about any UHD display.

Also included with this set is a 1080p Blu-ray which contains a 3D version of the film. I hate to say this, but, for me, this is the preferred version to watch, as the 3D cinematography is outstanding. The higher resolution of the UHD version provides a sense of depth, but nothing compares to what this natively shot 3D film can offer. When the camera catches a swarm of butterflies, you actually feel like you are right there in the middle, fully immersed with butterflies occasionally breaking the Z-axis, but also appearing far off into the distance. There was no crosstalk or ghosting evident whatsoever.

One small detail I noticed between the 4K UHD and 1080p Blu-ray, and that is that the opening titles on the Blu-ray appear more centered and larger on the Blu-ray than they do on the UHD version.

Shout! Factory has included a Dolby Atmos soundtrack that contains a core Dolby TrueHD 7.1 track. As a 7.1 track, it’s fairly basic, with occasional atmospheric effects noticeable in the surrounds (such as wind, leaves rustling, birds chirping, etc.). The score by Leonardo Heiblum and Jacobo Lieberman is immersive, often surrounding the viewer in music by utilizing all of the available channels. Narration is directed to the center channel almost exclusively, and never gets lost in the mix. Dynamic range is exceptional, allowing the viewer to “hear” small sounds like a caterpillar munching on a leaf. It’s not what I would call a reference quality track by any means, but it does its job quite well.

Behind the Scenes (1080p; 28:37): A rather informative documentary on the making of this documentary.

Image Gallery (1080p; 1:11): A very brief slideshow of 20 stills from the movie. There seems to be an authoring error on this feature, as it runs in a continual loop with no option of getting back to the main title.

Blu-ray/3D Blu-ray: Includes the movie in 2D and 3D 1080p with Dolby Atmos audio, plus all of the same bonus features.

A fascinating documentary on, of all things, Monarch butterflies, made in the IMAX format, available to view in stunning 4K UHD, 3D Blu-ray, and 2D Blu-ray, plus a well-made documentary on the making of the film all make for a nice package and a great disc to show off your UHD display. 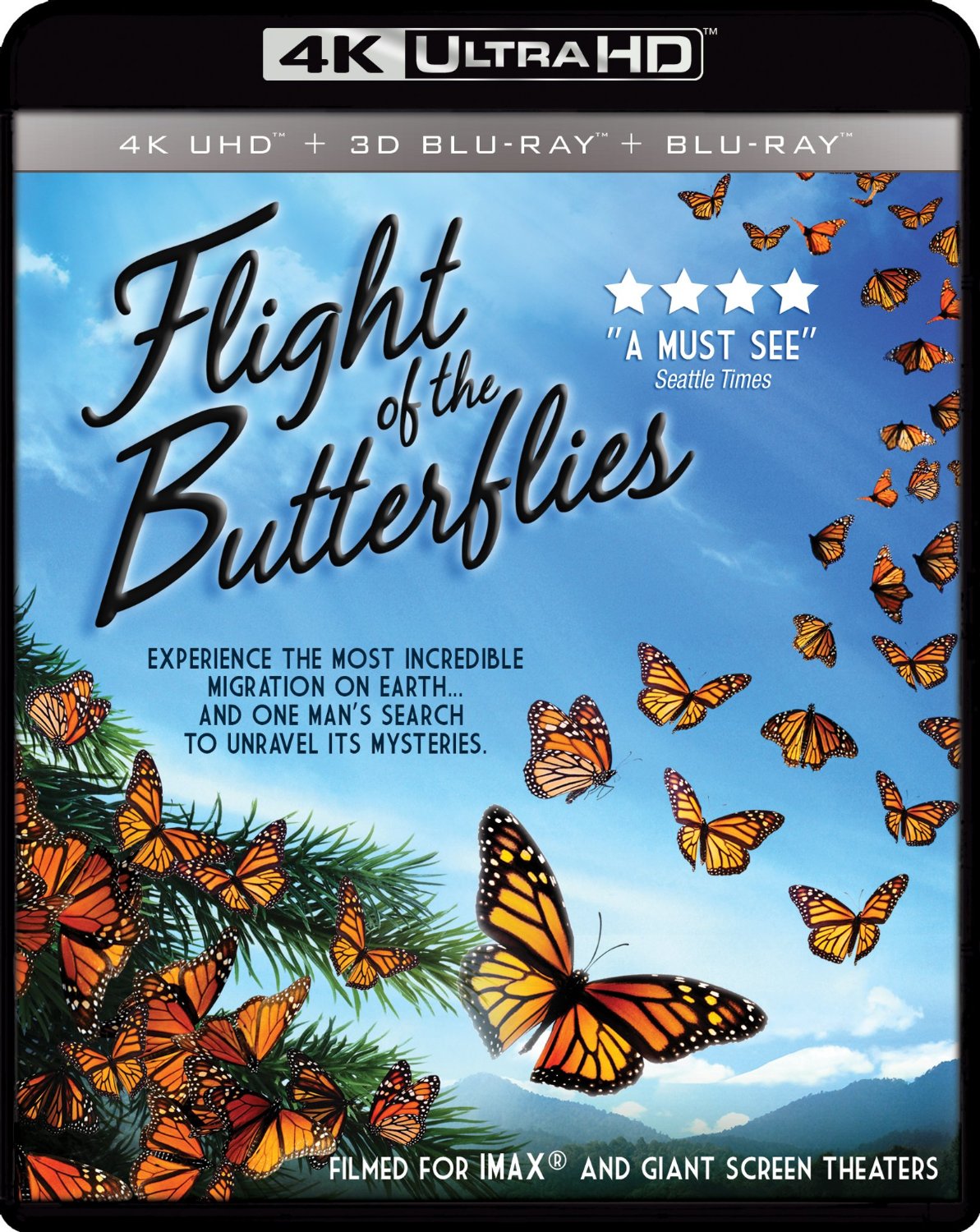