Forum List What's new Dark Style Change width
Log in Register
What's new Search
Menu
Log in
Register
Navigation
Install the app
More options
Dark Style
Close Menu
Posted on April 14, 2018 by Matt Hough
You are using an out of date browser. It may not display this or other websites correctly.
You should upgrade or use an alternative browser.
Reasonably taut and exciting Cold War thriller. 3.5 Stars

A cat-and-mouse thriller turns interestingly into a Cold War espionage tale in Henry S. Kesler’s Five Steps to Danger, a 1957 independent production which is the latest remastered thriller in the Classic Flix line.

A cat-and-mouse thriller turns interestingly into a Cold War espionage tale in Henry S. Kesler’s Five Steps to Danger, a 1957 independent production which is the latest remastered thriller in the Classic Flix line. It’s an unpretentious drama that keeps its audience a bit disoriented for a good chunk of its running time but which finds its disparate pieces falling into place as it nears its conclusion. It’s another one of those lesser known 1950s’ works that features lots of familiar faces but whose reputation hasn’t been enhanced by the passage of time. This excellent looking new Blu-ray release should give the movie a new lease on life.

Stranded in southern California after suffering car trouble, businessman John Emmett (Sterling Hayden) is offered a deal by passing motorist Mrs. Ann Nicholson (Ruth Roman). She needs to get to Santa Fe, New Mexico, and by taking Emmett on as a passenger, she can split driving chores with him and get there twice as fast as she could alone. On their lengthy drive, she tells him her sad story of being a German immigrant and of the recent murder of her brother after some secret Soviet missile plans had been delivered to her for her to smuggle out of Berlin to be delivered to longtime friend, missile scientist Dr. Reinhart Kissel working at a local university in Santa Fe. But there is more to Mrs. Nicholson’s story involving a murder back in Los Angeles and a psychiatrist (Werner Klemperer) who insists Ann is mentally ill and in desperate need of the confinement and rest of a sanatorium. As the journey continues, there are constant threats from people intent on thwarting Mrs. Nicholson’s reaching her destination.

Producer-director-screenwriter Henry S. Kesler adapted his screenplay from the story “The Steel Mirror” (an important prop in the film, too) by Donald Hamilton, and Kesler wisely keeps things interesting by making the sure the viewer is kept continually off balance through much of the movie’s running time. A nurse (played by Jeanne Cooper) is inserted early into the story to alert us to Ann’s potential mental instability, and her foggy recollections about her past and her pleading ignorance about the Los Angeles murder and the university dean’s (Richard Gaines) insistence that no Dr. Kissel had ever worked at the university make us distrust Ann for much of the film. But there are other mistrustful characters swirling around the couple on the run, too, and when agents from both the CIA and the FBI make their presences known, it becomes obvious that Ann’s plight is a piece of a much larger story going on around her and John about which they are only partially aware. Henry Kesler was no cinema artiste but rather a good, workmanlike director who films the story very straightforwardly with no arty touches. In fact, his staging of a climactic shootout is a bit clumsily handled (the way it’s filmed, one particular shooter would seem to have hit his target whereas the shot wasn’t anywhere near his victim), and the pacing in certain sequences (a highway ambush in particular) might have been a little more briskly staged and cut with a finer edge.

Ruth Roman gets top billing here as the enigmatic victim Mrs. Ann Nicholson, and with her throaty voice and moist eyes, she proves an effective target of the various Cold War combatants out for what she knows. Sterling Hayden offers his usual sturdy and stalwart leading man though he seems a little less driven for the truth as the film draws to its conclusion than one might have expected. Future Emmy winners Werner Klemperer and Jeanne Cooper are most effective in their roles, especially Klemperer who has a much more complex part to act. Richard Gaines is especially loathsome as the duplicitous dean, and it’s entertaining seeing Ken Curtis on hand as an American agent out for the truth. Peter Hansen also shows up in a flashback scene as the man who passes Ann’s brother’s missile plans along to Ann.

The film’s original theatrical aspect ratio of 1.85:1 is faithfully rendered in this 1080p transfer using the AVC codec. The image is quite clean and is fairly spotless apart from two or three thin, light scratches. Mostly sharpness is excellent apart from a couple of mediocrely focused shots, and black levels are nicely rich and deep. The film has been divided into 7 chapters.

The mono soundtrack is represented in DTS-HD Master Audio 2.0. Age-related problems with hiss, crackle, hum, and flutter have been completely eliminated though nothing could be done with some of the low budget location recording techniques which leave voices very arid and trebly. Studio audio is much stronger with decent bass levels in both dialogue, sound effects, and the music score by Paul Sawtell and Bert Shefter.

There are no bonus features on the disc. There is a nice black and white still on the flip side of the case cover.

Five Steps to Danger deserves to be better known. It features well-known actors in ingratiating roles and a nicely paced espionage yarn that is more complex than it first appears. The Classic Flix release is another winner for the company.

Thanks for the review. I have always found Sterling Hayden to be a very dull actor and won't be picking this up. Ruth Roman is in a following release - Down Three Dark Streets, which is a much better film.

I'm pleased to report that we provided the primary source documents to ClassicFlix to insure the correct aspect ratio!

Keith Cobby said:
Thanks for the review. I have always found Sterling Hayden to be a very dull actor and won't be picking this up. Ruth Roman is in a following release - Down Three Dark Streets, which is a much better film.
Click to expand...

I'll be reviewing that on Monday.

I hope it's a good one because it is one of my rare pre-orders.

Keith Cobby said:
I hope it's a good one because it is one of my rare pre-orders.
Click to expand...

Well it's not super tense or action-packed but it is intelligently written and features one of the very first theatrical-film utterances of the term "CIA," so it carries minor historical significance and is a must-have for fans of Cold War movies.

I'm looking to get this one...
Sounds like a good blast from the past.
C

excellent review and everyone interested in FILMNOIR should buy this and other ClassicFlix releases . A really top quality label that has entered a genre that nobody else bothered about .

I admire ClassicFlix and really appreciate what they are doing to bring these films to us in the best possible presentation. I've got about half of their recent output with more to come, but Five Steps to Danger is a film I've never seen. I like Cold War intrigue/thriller themes in general, even when presented in a somewhat melodramatic or even hackneyed way. I would hope this might be at least as good a film as Atomic City for instance. I'll soon find out for myself.
You must log in or register to reply here. 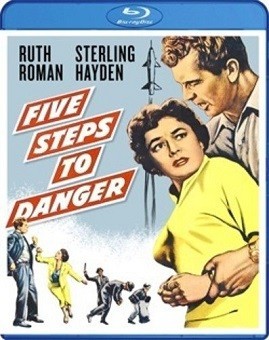