Forum List What's new Dark Style Change width
Log in Register
What's new Search
Menu
Log in
Register
Navigation
Install the app
More options
Dark Style
Close Menu
Posted on May 19, 2016 by Matt Hough
You are using an out of date browser. It may not display this or other websites correctly.
You should upgrade or use an alternative browser.
A docudrama engagingly told 3.5 Stars

A docudrama with the same basic tone and texture of The Perfect Storm, Craig Gillespie’s The Finest Hours tells a gripping story of a hazardous rescue at sea more than sixty years ago when navigation and communication were much less sophisticated than they are today and when men used gut instincts arrived at by years at sea to guide them through treacherous conditions.

A docudrama with the same basic tone and texture of The Perfect Storm, Craig Gillespie’s The Finest Hours tells a gripping story of a hazardous rescue at sea more than sixty years ago when navigation and communication were much less sophisticated than they are today and when men used gut instincts arrived at by years at sea to guide them through treacherous conditions. The film makes things difficult for itself by trying to cover one too many scenarios occurring during the rescue operation, but the basic story is certainly absorbing, and the movie holds one’s interest despite its flaws.

When the oil tanker Pendleton splits in half during one of the worst winter storms in recorded history off the Chatham coast, Coast Guard sailor Bernie Webber (Chris Pine) takes himself and three volunteers (Ben Foster, Kyle Gallner, John Magaro) on a seeming suicide mission to rescue whatever survivors can be found. Getting to the boat through gale force winds and mountainous sea swells requires the kind of daring that the sweet-natured, soft-spoken Webber has never before demonstrated, but he’s determined to do his duty. On the Pendleton, chief engineer Ray Sybert (Casey Affleck) becomes the commander when the entire officer staff goes down with the bow part of the ship which sinks immediately upon separation, and his job is keeping hotheaded D. A. Brown (Michael Raymond-James) and his cronies in line and willing to help him run the boat onto a shoal to slow its sinking in the freezing waters off Cape Cod.

The screenplay by Scott Silver, Paul Tamsay, and Eric Johnson does a fine job cross-cutting between Webber and his men trying desperately to make headway against the treacherous waves blocking their path to the open sea with Sybert and his engineer crew using every bit of know-how to keep their half of the ship from sinking and heading it toward some possible rescue. Each of these scenarios feature riveting complications which the men deal with through gutsy pluck and fierce determination (Webber loses his compass during one encounter with a wave; Sybert’s boat loses generator power so that the pumps cease working speeding their rate of descent) all beautifully directed by Craig Gillespie, and the use of CGI to simulate the tumultuous seas and howling wind conditions in the dead of winter are both realistic and completely absorbing. But the screenwriters attempt to provide an audience hook (as if fighting for one’s life isn’t hook enough) by including Webber’s gutsy fiancé Miriam (Holliday Grainger) back on land railing against Webber’s superior (Eric Bana) for sending him out on such a risky mission and plowing her car into a snow bank in exasperation over her helplessness in aiding the man she loves. (We’re even treated to their first date and the subsequent attempts of teaching her to dance as a way of endearing an abrasive character to the audience and providing an introduction to the Webber character’s quiet personality.) All of Miriam’s scenes thus seem intrusive and most definitely dramatically inert compared to the derring-do on the high seas. Even a ridiculous insertion into the climax finally finds a way for Miriam to aid her fella, but it seems ludicrous that the townsfolk would need her to think of such an obvious ploy to assist in the rescue of the tiny Coast Guard vessel.

The film’s two major presences are offered by Chris Pine and Casey Affleck, and each etch a portrait of a man determined to do his job despite overwhelming odds and a sometimes lack of total support by those behind him. That Affleck emerges as the more powerful performance of the two is only natural given his character’s more dynamic personality. Pine’s Webber grows appreciably as the film progresses. Ben Foster’s Richard Livesey is a gallant second-in-command to Pine’s Webber, but the film doesn’t give him much to do other than be a stalwart friend to the more timid Webber. Kyle Gallner and John Magaro are each given a couple of quiet moments to shine during the mission. As Webber’s commander, Eric Bana struggles with one of the weirdest southern accents heard in recent years. Ship’s cook George ‘Tiny’ Myers is played very engagingly by Abraham Benrubi, and Graham McTavish plays the engineer’s second mate who gives Sybert the support he needs while Michael Raymond-James does yeoman work as the hothead certain he knows what’s best when it’s obvious his ideas would get many people killed. Holliday Grainger as the assertive Miriam takes some time to become likable, but one eventually gives in to her charms.

The film’s 2.39:1 theatrical aspect ratio is faithfully delivered in this 1080p transfer using the AVC codec. Sharpness is sometimes muted in combining elements of live photography and CGI, but at its best, the images are solid and detailed. Color is likewise muted due to the wintry elements of the storytelling and the greens, grays, and blacks which predominate during all of the sea scenes. Black levels aren’t as deep as you’ll ever see, but contrast is consistently maintained throughout. The movie has been divided into 21 chapters.

The DTS-HD Master Audio 7.1 sound mix offers an enveloping environment throughout all of the sea sequences with howling winds, lashing waves, and pelting rain offering atmospheric details that put the listener into the middle of the action. Dialogue has been well recorded and has been placed in the center channel and is always discernible despite the noise surrounding it. Carter Burwell’s background score gets the full surround treatment in all available channels.

Against All Odds: The Bernie Webber Story (14:10, HD): producers James Whitaker and Dorothy Aufiero, director Craig Gillespie, Bernie Webber’s daughter, and residents of Chatham recount the story of this most famous rescue operation.

Deleted Scenes (4:28, HD): two scenes may be viewed individually or in montage.

Brotherhood (1:49, HD): the first of four EPK vignettes featuring members of the cast and crew recounting memories of making the movie. Here, Chris Pine, Ben Foster, Kyle Gallner, Casey Affleck, and John Magaro along with director Craig Gillespie promote the camaraderie among the cast in making the picture.

Two Crews (2:02, HD): Chris Pine and Casey Affleck tell the story of the rescue from his side of the action. Director Craig Gillespie also contributes.

What Is Your Finest Hour? (1:02, HD): a current member of the Coast Guard recounts her most hazardous mission.

The Finest Hours offers a harrowing if inevitable life-affirming story of heroism and sacrifice featuring outstanding cinematography and fine performances. The Blu-ray offers excellent picture and reference quality sound to supplement the storytelling.

Really enjoyed this old fashioned adventure film. Sad that a 3D version hasn't been announced. Definitely picking up. Thanks for the review.

I knew it had a 3D domestic release, but the film was such a disappointment at the box-office that I certainly didn't expect a domestic 3D release. And given how so much of the movie involves a lack of depth perception due to the horrific weather conditions, I wonder how effective 3D would be for this title. I'm sure the scenes in the engineering room would be very immersive, but nothing else would seem to be.

Japan is the only country with a 3D release? I am interested in getting a 3D import

Ronald Epstein said:
Japan is the only country with a 3D release? I am interested in getting a 3D import
Click to expand...

I got mine from eBay. It was released in India last week. 3D is medium throughout, and the movie itself is okay (a B-), but a decent framily-friendly, old fashioned story. Audio is DTS-HRA 7.1 (vs. MA), but nonetheless excellent. I have a Yamaha 3050, so upscaled to 11.2 via Neural:X and it sounded great. For 3D, snow is often in foreground, and there are other decent 3D depth effects.
You must log in or register to reply here. 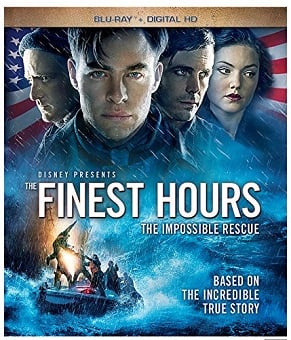