For Volume IV in Kino’s Film Noir: The Dark Side of Cinema series, three more film noirs (one from Paramount, two from Universal) are unearthed for the first time on Blu-ray. One deals with murder and smuggling via air cargo (Calcutta), another deals with a moral and ethical quandary concerning life and death (An Act of Murder), and the final one deals with the crime of the century in bank robbing (Six Bridges to Cross).

In post World War II Asia, Neale Gordon (Alan Ladd) is a part of a group of pilots shuttling cargo between Calcutta and Chungking. When a fellow pilot is strangled to death, Neale decides to investigate for himself and find those responsible. However, when Neale meets the fiancée of the dead man (Gail Russell), he soon becomes embroiled in a much larger plot involving stolen jewels and believes there’s more to the story than it first appears…

John Farrow was no stranger to action and film noir movies in his career (he received an Oscar nod for 1942’s Wake Island and would direct The Big Clock a year after this movie), but Calcutta is one of the more slighter efforts of his career. While smuggling is one of the more standard crimes in the noir genre, the fact that it’s happening overseas in an exotic locale gives it a nice little wrinkle. However, the plot itself treads familiar territory and doesn’t really offer much new twists to the formula; the fact that it’s nicely and briskly paced does manage to gloss over some of the flaws presented by the standard plot. Farrow does manage to wring out another solid performance from Alan Ladd – who had already established himself in the genre with This Gun for Hire (1942), The Glass Key (also 1942) and The Blue Dahlia (1946) prior to this movie – and some solid performances from supporting players William Bendix (as Neale’s fellow pilot) and June Duprez (as the sultry nightclub singer); the only issue with the cast is that Gail Russell is a little too innocent looking to be the femme fatale of the story (while it’s also a nice twist, I believe that Ladd’s frequent co-star Veronica Lake would’ve fared much better in this part here). While it’s not quite on the same level as The Big Clock, Calcutta is still a diverting and decent noir in the career of John Farrow.

Calvin Cooke (Fredric March) is a straight laced, by the book judge in a small Pennsylvania town whose strict adherence to the letter of the law is put to the test when tragedy strikes close to home. His beloved wife Cathy (Florence Eldridge) has been diagnosed with an inoperable brain tumor and is slowly dying in unbearable pain. Although he tries to ease her suffering at first, Calvin’s thoughts soon turn to ending her life; when she does die, the question soon turns to whether the judge committed an act of mercy, premeditated murder or whether a crime was committed at all.

Before the Hollywood blacklist hit the pause button on what was shaping up to be a very productive career, director Michael Gordon turned in one of his best movies in An Act of Murder. As part of a cycle of noirs dealing with social issues rarely touched upon in mainstream movies, the idea of a mercy killing to save someone from suffering further from a terminal illness was more than a little daring at the time of the movie’s release; this, of course, was well before euthanasia became a much more prevalent hot button issue in society. Buffeted by an outstanding script by Michael Blankfort and Robert Thoeren, the movie also features top notch performances by its cast, especially by real life couple March and Eldridge, both of whom give the tragedy a touching and human angle to it. Although overlooked over the years, An Act of Murder is a great hidden gem of the noir genre and one that’s ripe and worthy of rediscovery now.

In Boston, a strange relationship forms between police officer Edward Gallagher (George Nader) and small time hood Jerry Florea (Tony Curtis), going back to when Gallagher wounded Jerry during a robbery. As the years pass, Gallagher tries to get Jerry to go straight, but some people just can’t help being who they are; when Jerry does try to lead a legitimate life, the crime of the century occurs near one of Jerry’s gas stations, with Jerry considered a person of interest. Can Jerry finally stand up and do what’s right or will the ramifications of a life of crime finally bring not just him, but Gallagher down as well?

A former actor who turned to the director’s chair, Joseph Pevney had a few solid films as a director and Six Bridges to Cross is among his best. Based upon the infamous Great Brink’s Robbery of 1950 – the first of four movies made over the years – the film uses the actual Boston locations to great effect (kudos to cinematographer William H. Daniels), although with a reworked and somewhat fictionalized script by Sydney Boehm. The movie also gives Tony Curtis a great (if somewhat underrated) role that helped him become more established dramatically (the big breakthrough, of course, would come with Sweet Smell of Success two years after this one); he’s ably supported by the likes of George Nader, Jay C. Flippen, Julie Adams, and a young Sal Mineo in his film debut. In addition to the solid and entertaining script and cast, the movie also has some solid contributions from longtime Universal stalwarts like Russell Schoengarth (editor), Frank Skinner (composer; uncredited here along with Herman Stein), Alexander Golitzen & Russell Gausman (production designers); Jeff Chandler – originally slated to take the lead here – provides the narration and also co-penned the title song with Henry Mancini, with Sammy Davis Jr. crooning the song during the opening credits. While it hasn’t garnered much attention over the years compared to other movies based on the infamous robbery – William Friedkin’s The Brink’s Job (1978) is likely the most known of these – Six Bridges to Cross is still a well done and entertaining film noir that’s ripe for reappraisal and rediscovery.

Calcutta and An Act of Murder are presented in their original 1:37:1 aspect ratios, while Six Bridges to Cross is presented in its original 1:85:1 aspect ratio for this release. All three films have strong and organic film grain, with fine details and gray scale rendered faithfully; An Act of Murder appears a bit softer than the other two titles since – as Robert A. Harris mentioned in his “A Few Words About…” – the element used for this HD transfer appear to have come from a print struck from a later generation from the original camera negative (notice the abundance of vertical lines and scratches on one of the reels). Other than that, Calcutta and Six Bridges to Cross have minimal instances of scratches, vertical lines, tears or dirt present on their respective HD transfers. In short, each of the three films have likely been given their best visual presentation on home video.

All three films are presented in their original mono soundtracks, presented on DTS-HD Master Audio tracks for this release. Dialogue and sound effects is strong and clear on all three films, with the music scores (Victor Young for Calcutta, Daniele Amfitheatrof for An Act of Murder and an uncredited combination of Frank Skinner and Herman Stein for Six Bridges to Cross) are each given clarity and fidelity; there’s little to no issues like crackling, hissing or distortion present here. Overall, each film in this set has likely been given the best audio presentation on home video.

Commentary by film historian Nick Pinkerton – Recorded for this release, Pinkerton goes over the background info on the movie and its cast and crew.

An Act of Murder

Commentary by film historian Samm Deighan – Newly recorded for this release, Deighan goes over the movie’s themes as well as some of the background information on the cast and crew as well.

Commentary by film historian Samm Deighan – For this newly recorded commentary track, Deighan again shares some information on the movie, its cast and crew, and the real life crime that inspired the film.

TV Promo featuring Tony Curtis (6:57) – The actor talks a little bit about the movie and his own life in this brief archival spot.

Kino’s Film Noir: The Dark Side of Cinema IV has scored another home video bullseye with three interesting and entertaining movies making their Blu-ray debut (Calcutta apparently making its home video debut here), with decent HD transfers and three solid and informative commentary tracks accompanying each film. Highly recommended and worth upgrading from the Universal Vault Collection MOD DVD for both An Act of Murder and Six Bridges to Cross. 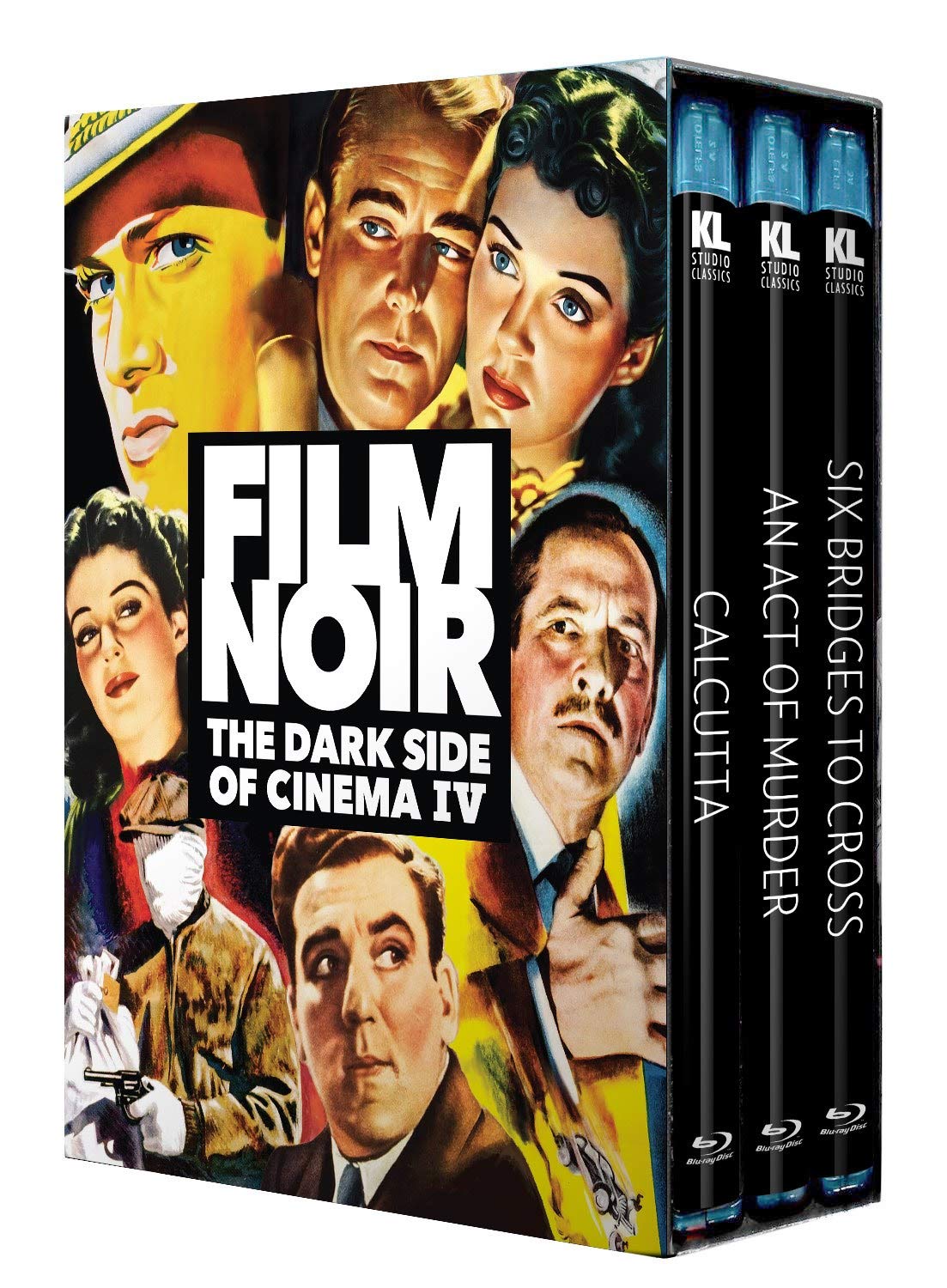