Fighting Back doesn’t really feature star names or a riveting story of an ex-con out for a better life, but it features an adorable canine co-star who easily steals the show from all of the other actors.

The very definition of a lower-tier programmer produced during the waning years of the studio system, Malcolm St. Clair’s Fighting Back offers low budget filmmaking in a tale that in a few years would serve as a nondescript one hour television drama. The story barely holds one’s interest, but an exceptionally cute canine co-star saves the day.

After five years of Army service, Nick Sanders (Paul Langton) is delighted to return to his wife (Jean Rogers), son (Gary Gray), and the well-trained household dog Snuffy. Nick was a convict who volunteered for war service on the deal that he’d be released after his service stint was over, but he fears he won’t be able to find work as an ex-con. Wife June has that problem all smoothed over with her textile firm boss Mr. Higby (Morris Ankrum). Nick will replace June as a buyer, a swap that has everyone except Higby’s snooty wife Martha (Dorothy Christy) on board. Martha fears Nick’s formerly crooked ways are not a good fit for the company, and she goes out of her way to be insulting to Nick and his son Jimmy who has become best friends with her handicapped son Larry (Tommy Ivo). When the criminal (John Kellogg) whom Nick took the fall for comes calling looking to see if Nick’s new job and acquaintanceship with the Higbys might lead to a potentially big score for him, Nick suspects there is serious trouble ahead, and he isn’t wrong.

John Stone’s screenplay mixes dramatic and comedic situations, the drama reminiscent (and somewhat borrowing) from the beginning of the Oscar-winning sentiments found in The Best Years of Our Lives while the comic situations, whether it be found in the irritating next door neighbor (Lelah Tyler) always borrowing things, an extended softball game (obvious padding to extend the film’s running time to an hour), or some slapstick antics as Nick and June attempt to hide a valuable necklace stolen from Mrs. Higby while a suspicious police detective (Joe Sawyer) searches their home rarely merit more than a smile. One of Fox’s most prolific B-movie producers, Sol Wurtzel seems to have mounted this production independently and then released through Fox since production values are quite modest lacking the Fox sheen which can be found even on their lowest budgeted productions. It’s clear, however, that no expense was spared in finding a very talented and highly trained dog who takes center stage through much of the movie performing a series of tricks that are pretty impressive and very necessary if the film’s narrative is to work at all. There are all kinds of legal and logical pot holes in the script (people including the police come and go in the Sanders’ house without ever knocking, and search warrants seem unnecessary in this fictional world), and time has been compressed to aid in the film’s pacing. The core story might have made for a much more important, dramatic examination of ex-cons striving for the straight and narrow or of children bringing disparate families together though their more straightforward sense of fair play and brotherhood, but screenwriter Stone takes easy outs to avoid dealing with anything meaningful in the small time allotment he has.

Though the actors may not be household names, they do quite well with the meager material. Paul Langton and Jean Rogers make a believable married couple (at least until that embarrassingly farcical bracelet hiding business late in the movie), and young actors Gary Gray and Tommy Ivo are completely natural in front of the camera. John Kellogg is a familiar heavy from many minor film and television roles as punks and tough guys, and Morris Ankrum and Pierre Watkin (as Nick’s commanding officer in the early scenes of the movie) are familiar faces as well doing solid work in smaller roles. The dog Daisy who plays Snuffy is the star of the film for sure and is delightful to watch going through her paces.

The film’s original theatrical 1.33:1 aspect ratio is presented faithfully. While the film has not been cleaned and is thus littered with dust specks, some scratches, debris, and reel change markers, the transfer still looks very good with excellent sharpness (sharp enough to easily see that’s Paul Langton’s stunt man in the climactic fights with John Kellogg) and a grayscale that features solid black levels and clean whites. Contrast has been consistently applied for a pleasing picture if one can overlook the age-related artifacts. The film has been divided into chapters every ten minutes so this film has 7 chapters.

The volume level is slightly elevated on the transfer, but one can safely listen to it without lowering the volume levels. The Dolby Digital 2.0 track is decoded by Dolby Prologic into the center channel. While age-related problems with low level hiss, crackle, and occasional pops are present, the dialogue is always completely intelligible, and the music score and atmospheric effects have been blended with surety so that none of them ever overpower the other.

Fighting Back doesn’t really feature star names or a riveting story of an ex-con out for a better life, but it features an adorable canine co-star who easily steals the show from all of the other actors. Fans of movie pets might find this one irresistible. 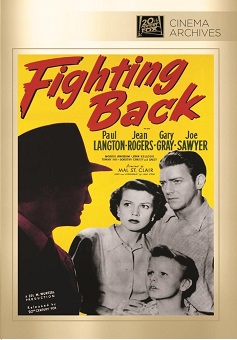