Posted on March 23, 2018 by Timothy E
Ferdinand is a better than average animated feature with some real heart. 3.5 Stars

Blue Sky Studios(Ice Age, The Peanuts Movie) have adapted the children’s book “The Story of Ferdinand” into a light-hearted and entertaining film that actually has some heart.

Ferdinand is the story of a young bull(Colin H. Murphy) literally bullied and ridiculed by the other bull calves for being gentle and loving of flowers.  Ferdinand runs away from his home after his father fails to return from the bull ring.  Ferdinand is adopted by a young girl, Nina(Julia Saldanha), and her family, which includes a goofy dog named Paco(Jerrod Carhmichael).  Ferdinand grows into an adult bull(John Cena) while retaining his kind spirit.

Ferdinand returns eventually and inadvertently to his home at the Casa Del Toro, where bulls are destined for the bull ring or the slaughterhouse.  Ferdinand’s rival, Valiente(Bobby Cannavale), is still at the ranch and continues to harass Ferdinand.  Other bulls are played by David Tennant, Peyton Manning, and Anthony Anderson.  Kate McKinnon plays comedy relief as a loopy goat named Lupe, and Gabriel Iglesias also offers comedy relief as Cuatro, one of a trio of hedgehogs.  Why is he named Cuatro when there are only three hedgehogs?  “We do not speak of Tres.”

As this is a children’s story with anthropomorphized creatures, the story rests on the conceit that the bulls aspire to find glory in the ring as their highest function and achievement.  Ferdinand eventually learns the fate of his father and tells the other bulls that the bulls never win in the ring.  The subject matter is handled tastefully in order to appeal to children of all ages and is rated PG.

The animation is excellent as expected from the same studio that produced the Ice Age and Rio films.  The story is nicely adapted from the children’s book and carries some themes of succeeding in life by being true to one’s self while being different from the rest of the crowd.  The voice cast is excellent.  Although pundits might say that having John Cena play a large and charismatic bull is not much of a stretch, the elements combine to make Ferdinand a better than average animated feature that adults may enjoy as well as children.

Ferdinand appears on 4K UHD and Blu-ray disc in its original 2:39.1 aspect ratio.  The 4K UHD disc is in 2160p using the HEVC codec with HDR.  The film was finished as a 2K digital intermediate but enhanced with HDR.  Video quality is excellent on both the UHD and Blu-ray discs.  The 1080p Blu-ray up-scales very nicely so that the difference between the 2 is not substantial.  UHD with HDR offers 4 times the resolution of standard Blu-ray with a much wider range of color.  I know this because the promotional materials for UHD tell me so.  There is just not much of a difference in quality between this excellent UHD disc and excellent Blu-ray disc of this film completed as a 2K DI.

I give the film a rating of 5 out of 5 for video quality and a 1 out of 5 for 3D.  (I would give it 0 out of 5  for 3D if I could, but the template on this platform does not permit this.)  Although this film was released theatrically in 3D, the studio has not yet seen fit to release it in 3D in any region of the world that I can locate.  Note to studio:  I would buy this in 3D if it were available.  I cannot buy it if you do not sell it.

The Dolby Atmos sound mix offers a rich aural experience with full use of the soundstage.  Dialogue originates primarily front and center with orchestral cues and sound effects seeming to originate from every direction.  Subtitles are available in English SDH, French, and Spanish.

Special features are included on the Blu-ray disc in 1080p and include all of the following:

Ferdinand’s Guide to Healthy Living with John Cena(3:09):  The voice of Ferdinand gives tips on healthy living supported by scenes from the film.

A Goat’s Guide to Life(3:08):  Kate McKinnon’s Lupe offers tips on health living supported by scenes from the film.

Ferdinand’s Team Supreme(3:45):  John Cena narrates (in character) a description of the supporting characters.
Spain Through Ferdinand’s Eyes(1:50):  Short tongue-in-cheek tribute to the nation in which Ferdinand is set.

Confessions of a Bull-loving Horse(3:22):  Flula Borg narrates in character as his Teutonic character Hans.

Creating the Land of Ferdinand(5:49):  Director Carlos Saldanha and design artists talk about the production design of this feature.

Anatomy of a Scene: The Bull Run(4:03):  Producers talk about their recreation of the running of the bulls in Madrid.

Learn to Dance with Ferdinand(7:46):  Choreographers talk about creating the dances that were then animated into the film.

Creating a Remarka-Bull Song(3:51):  Nick Jonas talks about writing his song for the film.

Also included is a “Movies Anywhere” paper insert with a validation code for digital download for those consumers who enjoy watching video wherever they go on a tiny screen on a mobile device.

Ferdinand is a fun diversion for all ages.  It is above average among animated films, even if it was not the best animated film release in 2017.  The video and audio presentation are flawless on the UHD and Blu-ray discs.  The special features are fun oriented rather than technically oriented and recommended.  Fans of Ice Age and Rio will very likely enjoy Ferdinand. 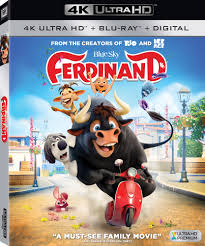